Next week’s snow warnings have been extended to cover most of the south coast, including Brighton and Hove – and there is also the possibility of thundersnow on Wednesday. 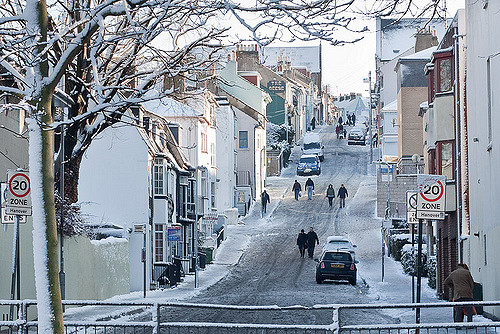 By Miles Sabin – a snowy Southover Street in 2009

Two yellow be aware warnings were put in place at 10am this morning, covering Tuesday and Wednesday. Tuesday is expected to bring up to 10cm of snow in some places – although Brighton is less likely to get snow that heavy.

And then on Wednesday, heavier snow is expected, which could see a totaly fall of more than 20cm over the two days in some parts of the east of the country.

The Tuesday warning says: “Snow showers or longer periods of snow are expected on Tuesday. There is the potential for travel delays on roads, with some stranded vehicles and passengers, as well as delays or cancellations to rail and air travel.

“Some rural communities could become cut off. Power cuts may also occur and other services, such as mobile phones, may be affected.”

The chief forecaster adds: “Further snow showers are expected through Tuesday, with the potential for a more organised band of snow to push south-west across many parts of England and Wales through the day.

“There is uncertainty in the extent of snow. However, there is the potential for 5-10 cm of snow in places where showers become more frequent, or in association with the more persistent band of snow.

“Nearby locations may see much less snow and only small accumulations of 0-2 cm in places. Strong winds will lead to drifting of lying snow, with lightning an additional hazard, particularly near North Sea coasts.”

The Wednesday warning says: “Heavy snow showers are expected on Wednesday. Showers will bring a large variation in amounts of snow across even small areas with some places seeing very little snow.

“There is the potential for 10-15 cm of snow in places where showers become more frequent whilst nearby locations may see much less frequent showers and only small accumulations of 1-3 cm in places.

“Strong winds will lead to drifting of snow, and lightning could be an additional hazard, particularly near North Sea, Irish Sea and English Channel coasts.

“By the end of Wednesday, more than 20 cm may have accumulated in places in some eastern counties of England, Scotland and Norther Ireland from a culmination of Monday, Tuesday and Wednesday’s snow showers.”