The race – started by Brighton and Hove mayor Councillor Mo Marsh – was run in bright sunshine but freezing temperatures.

A chilly east wind made the home stretch tougher than usual, putting a record time out of reach.

The first runner home was 31-year-old Olympic marathon runner Paul Pollock, an accident and emergency (A&E) doctor from Holywood, near Belfast, in an official time of 1 hour 6 minutes and 57 seconds.

He was joined on the podium by two other Pauls – four-time winner Paul Martelletti, a New Zealander from London, and Paul Whittaker, from Southend, in third.

The first local runners home were Kevin Rojas, from Brighton and Hove Athletics Club (AC), in seventh, with a time of 1:10:49, followed by eighth-placed Ian Leitch, from Brighton Phoenix, in 1:11:26.

Izzy Coomber, 28, a zookeeper who runs for Lewes AC, was the first woman to finish, completing her first half marathon in 1:19:00.

Former winner Sarah Bradbury, from Farnham, Surrey, came second – on her 45th birthday – with Emily Proto, from Shoreham, who runs for Arena 80, at Withdean, in third.

And as usual crowds lined much of the route, notably along the seafront. 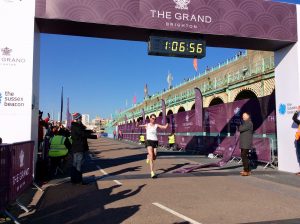 The event is a big fundraiser for the Sussex Beacon which organises the event each year. More than 130 competitors ran for the HIV charity although many choose to run for other charities.

The Sussex Beacon said: “The funds raised by each runner are so fundamental to the continuation of our services for people living with HIV, which cost over £2 million a year.” 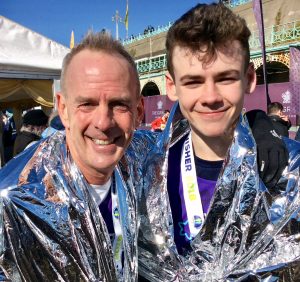 Norma Cook – aka Fatboy Slim – and his son Woody

Among those cheered over the line were Norman Cook – also known as Fatboy Slim – in just under two hours and his son Woody who finished a few minutes in front.

The DJ played a set at the Alexandra Palce in London last night and got just four hours’ sleep which, tongue in cheek, he blamed for trailing in behind his son. 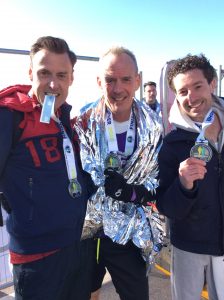 Hove councillor Robert Nemeth notched up a personal best of 1 hour 29 minutes. The Conservative councillor was sportingly cheered across the line by, among others, the Labour MP for Hove, Peter Kyle. 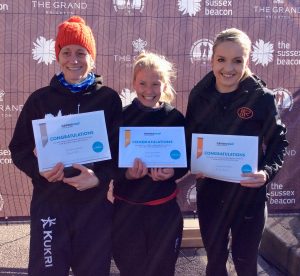 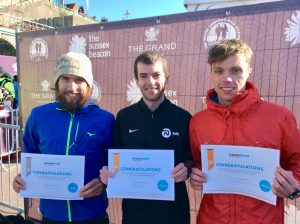 Missing schoolgirl may be in Brighton