Toys R Us in Hove to close within weeks

Toys R Us in Hove will close within weeks although a specific date has not been publicly announced. 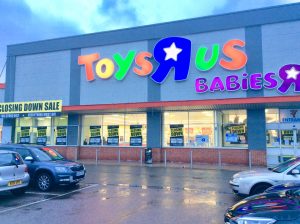 The chain is holding a national closing down sale. It has about 100 stores nationwide, including the branch at the Goldstone Retail Park, in Old Shoreham Road, Hove, and about 3,000 staff including at its head office and distribution depots.

Late last year the retailer hoped to make a hefty dent in its debts with a “company voluntary arrangement ” (CVA) which included asking landlords to cut rents.

Part of its cost-cutting plan involved shutting up to 30 of its least profitable stores.

But some landlords are believed to have given the company notice to quit rather than take lower rents.

In Hove the toy store – one of the company’s busiest and most profitable – is now understood to be in the final weeks of its tenancy.

While no official closing date has been announced, some staff expect to be out of a job at the end of the month. Many are on short-term or casual contracts.

One suggested that bosses may try to trade until the Easter holidays are over. Easter is on Sunday 1 April.

But the CVA was signed by Toys R Us creditors four days before Christmas, giving the company a three-month lifeline, suggesting the possibility of credit drying up sooner.

And traditionally many businesses are due to pay rent for the quarter on Lady Day – Sunday 25 March.

The company faces a £15 million tax bill, according to reports, with doubts expressed about its ability to pay.

And attempts to finalise its CVA before Christmas were delayed by a watchdog, the Pension Protection Fund (PPF), until a £9.8 million deal was agreed.

Toys R Us said that it would pay the PPF £3.8 million this year, with £2.2 million due by March and £1.6 million to be handed over in October.

The PPF now looks likely to pick up the liability for the fund’s £38 million deficit. Retired staff should be paid their pensions in full. Staff still working will receive less – but possibly as much as 90 per cent.

The Toys R Us board appointed administrators Simon Thomas and Arron Kendall, from Moorfields, last week. 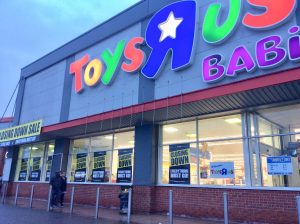 On Friday (2 March) they said: “Moorfields Advisory Limited today announces that it has commenced a nationwide closing down sales programme across the entire Toys R Us and Babies R Us store portfolio.

“Although Toys R Us is in administration, all of its stores are continuing to trade until further notice and discounts of up to 25 per cent are now available on all products.”

Two days earlier they had said that all stores would keep trading and, although the business would be wound down, they added: “We will make every effort to secure a buyer for all or part of the business.”

On Friday they said: “Some stores in the portfolio may be subject to closure in the coming days and so customers are encouraged to take advantage of the heavy discounting as soon as possible.

“Gift cards and vouchers will be honoured while the stores continue to trade.

“Deposits paid by customers under Take Time To Pay Agreements towards larger purchases will be honoured provided that the outstanding balance is paid and the goods are collected by (Sunday) 11 March 2018.

“Alternatively, customers can use their deposits towards the cost of any in-store purchases provided that these are also completed by (Sunday) 11 March 2018.”

They thanked staff for their work during the difficult phase of winding down the business.