Questions have been raised over the status of the Brighton and Hove Momentum group after an expelled Labour member said he remained on its steering committee and the group ignored national rules. 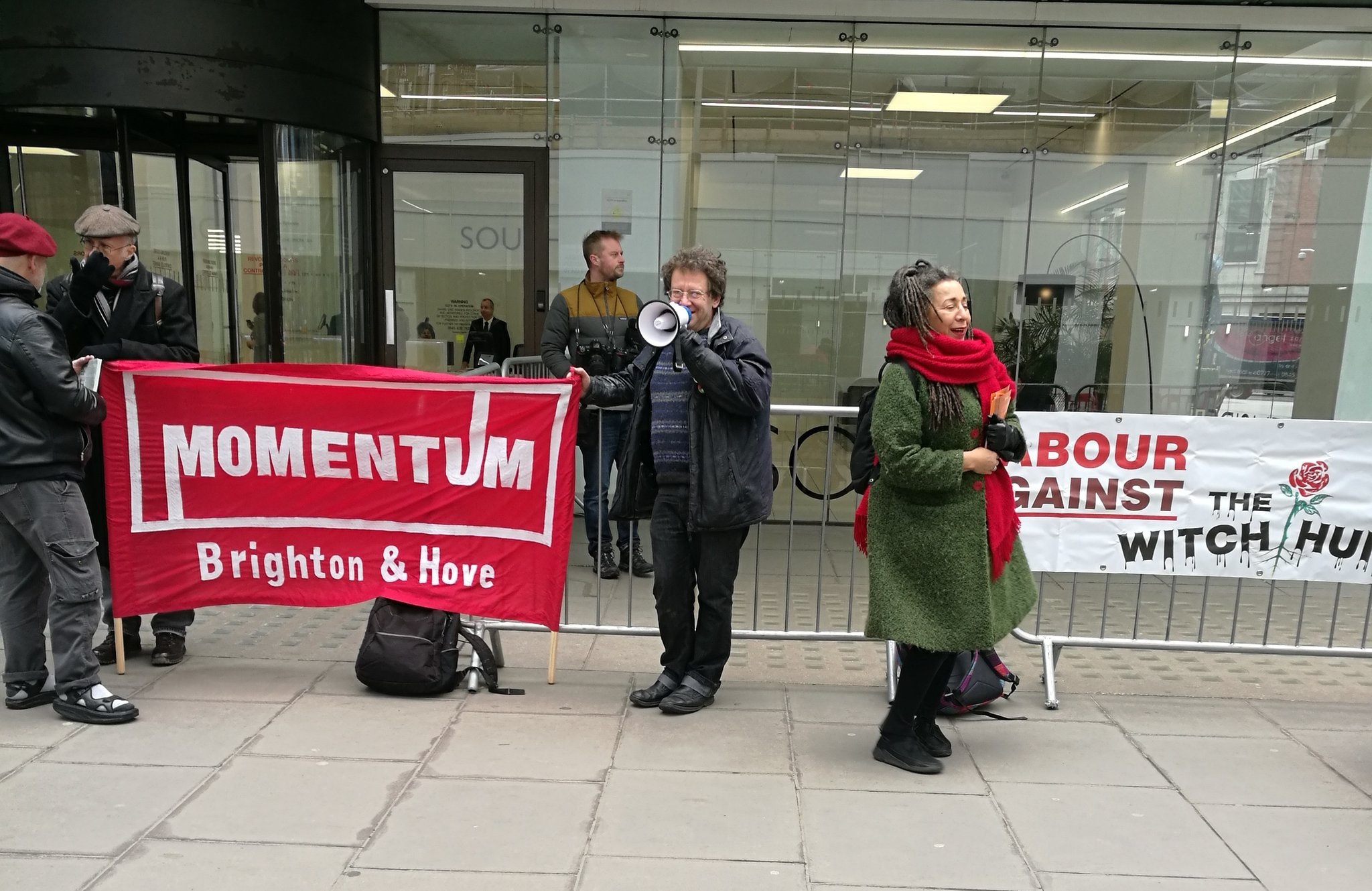 Tony Greenstein was expelled from Labour last month over a series of abusive tweets he sent fellow members, including the use of the word Zio, which a 2016 report commissioned by the party into antisemitism said had “no place in party discourse”.

Eyebrows were raised when Mr Greenstein addressed a Momentum meeting held two days after the decision was made public and this week he was pictured with his campaign group, Labour Against the Witchhunt, protesting outside Labour’s London HQ in front of a Momentum Brighton and Hove banner.

Today, he told Brighton and Hove News that he remains as a member of the local Momentum group’s steering committee, alongside two other unnamed people who have been expelled from the party.

He also said that the local group ignored the “imposed” Momentum constitution and allowed anyone expelled from the Labour party – of whom there are several in the local group – to remain as a member.

“National Momentum constitution was imposed and it was never agreed by anyone so there was as lot of resistance and local groups don’t necessarily implement it.

“I’m on the local Momentum committee for example. There’s one or two other expelled members of the committee. Three of us in total.

“We have had a high casualty rate in Brighton.”

A report on the Squawkbox website said that some local Momentum members were unhappy at the banner being used for yesterday’s protest, and the association with Mr Greenstein and Jackie Walker, who has been suspended for alleged antisemitism and was stripped of her position as Momentum’s national vice-chair after questioning the definition of anti-semitism.

It also quoted Momentum’s national HQ stating that permission had not been given for the banner to be used in association with the demonstration.

It’s not known who the other expelled members are. Mr Greenstein named Daniel Harris, who is currently suspended over allegedly antisemitic Facebook videos, as one other committee member.

Greg Hadfield, who has twice been suspended from the party over alleged intimidation and abusive behaviour, but whose case has remained unheard since October 2016, is the local group’s spokesman. At the time of publication, he had not responded to a request for comment.

Mr Greenstein said that Mark Sandell, who was elected chair of the Brighton and Hove constituency Labour party in 2016 but suspended from the party shortly afterwards and later expelled, occasionally turns up to Momentum meetings.

Momentum’s national HQ would not make a comment on the record. But Brighton and Hove News understands that where a local group is in breach of its constitution, its national coordinating group will contact them to resolve the issue.

The constitution requires members of Momentum to also be members of the Labour party, and if someone is expelled from the party, they are deemed to have resigned from Momentum – although there is an appeal process.

The constitution says: “Momentum members who have been suspended from Labour, but not expelled, will remain members of Momentum.

“Momentum members who believe they have been expelled from the Labour Party unfairly, along with all individuals about whom membership decisions are taken, have the right to a hearing by Momentum’s National Coordinating Group.

“Supporters of Momentum who are not members, can participate in campaigns and activities organised by a local group, network or Momentum nationally, but cannot hold a position within Momentum, vote in elections or hold other membership rights.”

Labour Against the Witchhunt was at Labour HQ yesterday to lobby the NEC to reinstate Mr Greenstein and drop disciplinary action against Ms Walker and other members accused of antisemitism.