Students claim victory as occupation ends after heating cut off

A student occupation of a half-built accommodation block which has ended after the heating was turned off in sub-zero conditions has reportedly cost the construction company more than half a million pounds. 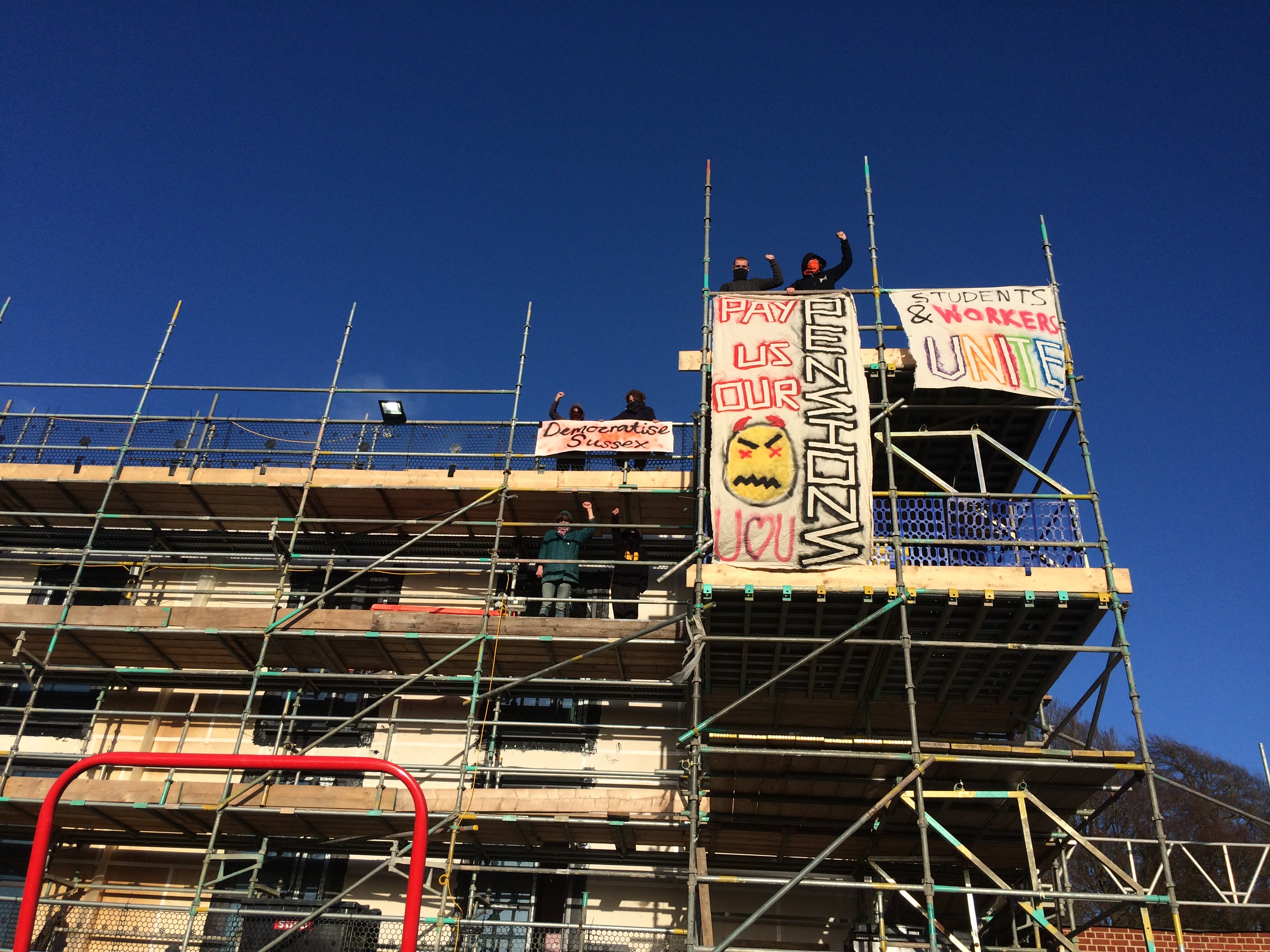 A group of 40 students broke into the construction site last Thursday with three demands – that the university met the demands of the UCU, whose members are striking; that the high proposed rents for the new block are slashed; and that construction company Balfour Beatty meet with Unite. They left on Sunday claiming victory after Balfour Beatty agreed to meet with union reps.

On Friday, access to the site portaloos was withdrawn, a food delivery was stopped, and in the evening a dog handler patrolled the site. On Saturday morning, electricity to the site was cut off, leaving the protesters without heating.

According to a source who attended a meeting between the University and Sussex Students Union, the occupation is alleged to have cost Balfour Beatty £513,000. A university spokesperson refused to comment on this figure, and a spokesperson for Balfour Beatty said they would be “meeting the significant costs incurred by the unlawful and unsafe occupation.”

The students went into occupation in solidarity with striking lecturers and to place pressure on Vice Chancellor Adam Tickell who, at the time, was a key negotiator in the ongoing UCU pension dispute.

The protesters also demanded that the new 2,000 bed accommodation, which will expand and replace Sussex’s cheapest accommodation, should not see rent prices almost double from £88.56pw to £156.66pw to become the most expensive on-campus accommodation.

The protesters’ final demand was that the construction company Balfour Beatty allow their workers to unionise and provide unhindered and unsupervised access to Unite the Union representatives onto the site.

The University of Sussex awarded Balfour Beatty a £120 million, 50-year lease which will see the firm finance, build and operate the accommodation site. The University will act as a co-shareholder in the project and put up 20% of the project equity.

Those within the occupation spoke to us about the treatment they received at the hands of Balfour Beatty and the University on the condition that their identity is kept anonymous as they fear disciplinary action.

Onsite toilets were cut off to occupiers on last Friday morning, with electricity shut off the following morning leaving occupiers without heating on the same day the Beast from the East returned to Brighton with sub-zero conditions and snow.

A Balfour Beatty spokesperson said: “In the interests of safety, the electricity supply was isolated and access to the portaloos was removed as Balfour Beatty could not assist an unlawful occupation.”

However, a University of Sussex spokesperson said: “The occupiers were given food, access to toilets and a safe route to leave at all times, 24hrs a day.” 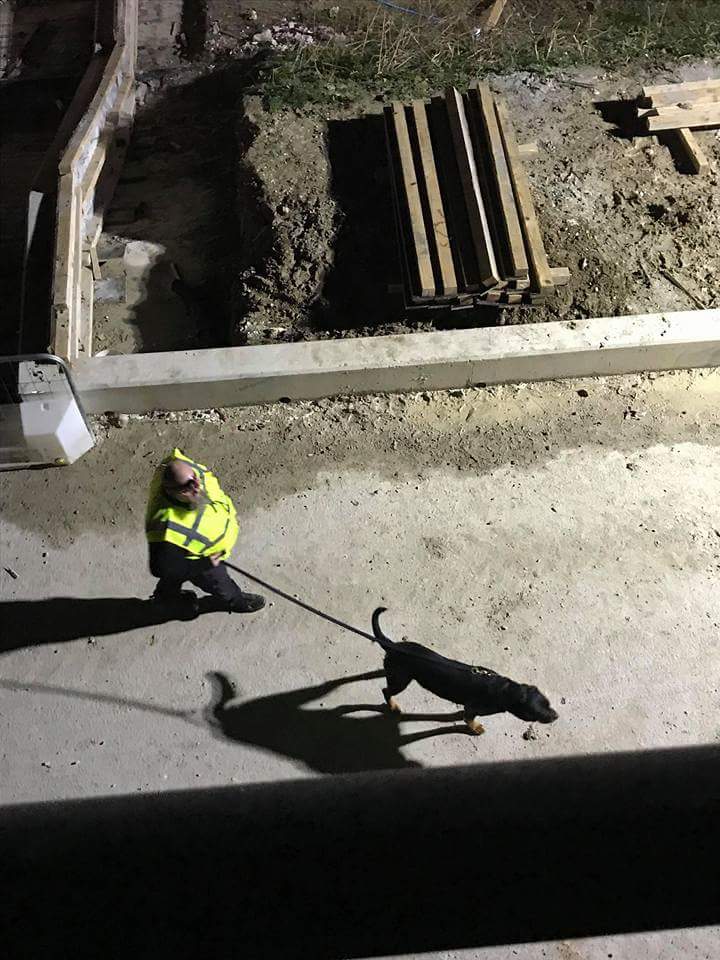 The same day as the electricity was shut off, protesters allege that Balfour Beatty did not allow a food delivery from supporters to reach them. A third-year student within the occupation said “We were freezing following the heating being turned off and we really needed some hot food.” During Friday evening, a dog handler was sent to patrol the two buildings the protesters were occupying.

One final year, 22-year-old student in the School of Global Studies said: “I told the dog handler that it would be using unreasonable force if they were to release the dog. They responded by saying ‘I don’t give a f*** if its illegal’ because they had ‘public liability insurance’.” Nevertheless, the dog was not released at any point.

The protesters said they contacted university management with their concerns after which the dog handler returned to his van and largely remained there.

On Saturday, protesters who were attempting to re-enter the occupation with supplies report they were chased across the construction site in icy conditions by Balfour Beatty security. A first year student told us that a member of security attempted to pull them away from the door to the building.

They said: “The door was very steep, if he had grabbed me I would have fallen about a foot onto the concentrate and metal below, as I escaped his attempt and closed the door he called me a b****.”

A University of Sussex spokesperson said: “The Balfour Beatty security team managed the situation sensitively and professionally and there is no evidence to suggest otherwise. The safety and welfare of the occupiers was a priority at all times.

“The use of guard dogs on building sites is common-place and at no time was there any threats to the students.”

A spokesperson from Balfour Beatty said: “The company implemented a standard security presence which included a highly trained Security Industry Authority licensed dog handler who acted with complete professionalism throughout the unlawful protest.”

Unite regional officer, Richard White said: “Balfour Beatty showed a clear disregard for people’s safety, they should have made sure the environment for occupiers was as safe as possible, to shut off the electricity and leave students without heating is irresponsible.”

Mr White also criticised the employment practices of Balfour Beatty. He said that many of those working on the site are not directly employed by the construction firm. Instead, staffing is outsourced to contractors and recruitment firms.

This means that Balfour Beatty is able to claim the workers are self-employed and therefore do not offer them a fixed contract or holiday and sick pay.

Mr White criticised the University for failing to ensure Balfour Beatty followed the same employment standards they have for their own employees. As Unite have not yet been allowed onto the site, Mr White was unsure of the exact number of individuals who are employed in this way.

The occupiers made the decision to leave the site on Sunday morning, they claimed victory on social media, writing: “Balfour Beatty agreed to meet with Unite representatives to discuss their labour practices.”

Contractors who were scheduled to work on the buildings the students were occupying were sent home without pay. Unite the Union has called on Balfour Beatty to fully reimburse those workers.

This article has been cross-published with The Badger Newspaper