The restaurant chain that closed several branches, including in Brighton, after a suspected outbreak of norovirus, has reported a £4.7 million loss. 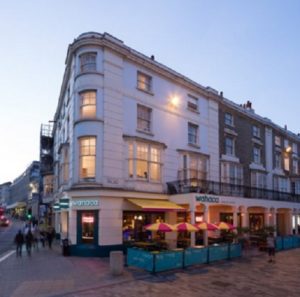 Wahaca, on the corner of North Street and New Road, Brighton, was shut for two days for a deep clean when people complained of sickness and diarrhoea.

The Mexican restaurant group said today (Thursday 5 April) that it had recovered from the closures in October and November 2016.

But they had “a significant impact on our trading performance”, the company said this morning, outdoing the challenging rise in business rates and rents.

Wahaca said that turnover, or sales revenues, totalled £46.6 million in the year to Sunday 25 June last year compared with £46.4 million in the previous year.

The business went from making a £640,000 pre-tax profit – the main financial benchmark – to recording a £4.7 million pre-tax loss.

And net assets of £800,000 were wiped out, with the annual accounts indicating liabilities of £3.2 million.

Wahaca was set up by Thomasina Miers, who won Masterchef on BBC TV in 2005, and fellow founder Mark Selby.

In the company’s annual report, it said: “The variances to the same period last year were impacted predominantly as a result of a one-off event in October that forced us to shut a number of our sites on a temporary basis.

“While this had a significant impact on our trading performance for the financial year relative to the previous year, the business has managed to recover from the aftermath of the event.

“The exceptional costs of £700,000 in the year were predominantly as a result of the October event.”

A Food Standards Agency report in November 2016 said: “As of (Sunday) 13 November, 289 restaurant staff reported illness and 828 complaints have been reported by members of the public.

“No foodstuff has been identified as the source of the outbreak to date but investigations into the supply and distribution chains are ongoing.”

Wahaca received an insurance payout of £286,000 after the bug struck.

The restaurant group, which has more than 1,000 staff at 26 branches, first opened in 2007. The Brighton branch opened in 2016, taking over the Strada restaurant premises, close to the Theatre Royal.

The Propel hospitality trade newsletter said that Wahaca’s highest paid director was given £129,000, compared with £61,000 in the previous year.