A wanted man has been arrested in Brighton and was due to be brought before magistrates in the town today to answer a number of criminal charges. 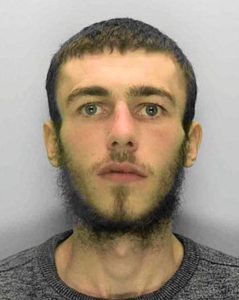 His arrest came a couple of days after the force issued a public appeal for help in tracking him down.

The 24-year-old, of Charlock Close, in the Broadfield area of Crawley, was wanted on suspicion of causing criminal damage, intimidating a witness and breaching bail conditions.

Doherty has been charged with two counts of criminal damage, one count of witness intimidation and one count of a racially aggravated breach of public order.

Police were searching for Doherty after claims that he had smashed windows at two properties in East Grinstead and had threatened a witness.

He had already been brought before court on Tuesday 27 March, charged with common assault.

He was accused of beating 19-year-old Megan Garber, in Argus Walk, in Bewbush Crawley, two days earlier – a charge that he denied.

But he did plead guilty to having cannabis and cannabis resin.

He was bailed to appear at Horsham Magistrates’ Court next month and ordered to stay out of East Grinstead until then – a bail condition that he is since alleged to have broken.