A Brighton bus company is celebrating the success of its “solar bus bond” fundraising to enable it to switch to running a fully electric fleet. 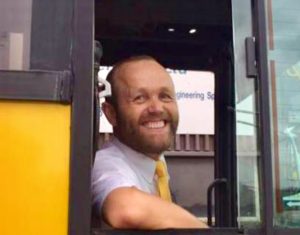 The Big Lemon was awarded just over £500,000 by the government towards the £1 million cost of upgrading its fleet, provided it match-funded the grant.

With £114,000 towards the goal from Brighton and Hove City Council, the company offered financial bonds – solar bus bonds – with a six-week deadline to raise £405,000.

It beat the target in half the time and has now extended the bond offer, with the aim of raising a further £135,000 and buying another bus.

Big Lemon founder and chief executive Tom Druitt said: “I’d like to say a massive thank you to all those who have invested in this project.

“It’s exciting to be on the verge of creating the UK’s first fully electric public bus network in Brighton and Hove and this will make a huge difference to air quality in the city.

“From a personal perspective the success of this campaign is very exciting as it shows that communities do not need big business or the banks to fund the improvements they so desperately need – people power can do it too.

“Because of the huge response we’ve had, we’re extending our plans to cover one more bus which will enable us to ensure the network is fully electric even when a vehicle is having its four-weekly maintenance inspection.”

The bond issue opened last month to help pay for three new electric buses. A fourth bus is being retrofitted, converting it from diesel to electric.

This will enable the Big Lemon to run its network of six bus services in Brighton and Hove with fully electric, zero emissions vehicles powered by solar panels on the roof of the bus depot.

The bonds were offered over a three-year term at 4 per cent or a five-year term at 5 per cent, with a minimum investment of £100.

Three weeks in – and three weeks before the deadline – the target has been reached and the three new buses have been ordered. They will enter service in the autumn.

As well as extending the bond issue to raise an extra £135,000 for the additional bus, the Big Lemon is also offering both shares in the company to the public.

It was just last year that the Big Lemon started running its first solar-powered bus from its depot in east Brighton. It currently powers three vehicles from the photovoltaic panels on its depot roof. 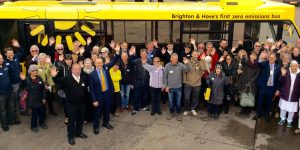 Last year the company also won contracts to run six routes in the area – the 16, 47, 52, 56, 57 and 66 – and it aims to be the first bus company in the UK to run its whole public bus network with electric vehicles.

The government funding came in the form of a £513,000 grant from the Department for Transport as part of its Low Emission Bus Scheme. And the council is contributing £114,000 from its Clean Bus Fund.

The Big Lemon, a community interest company (CIC), was started in 2007 and initially ran Buses fuelled by recycled cooking oil.

It aims to have a fully electric fleet – powered by its own solar panels – operating by the end of the year.

Mr Druitt said: “We are committed to running all our Brighton and Hove bus services with electric buses by the end of the year to tackle the terrible air quality issues in the city and are calling on members of the public to get involved.”