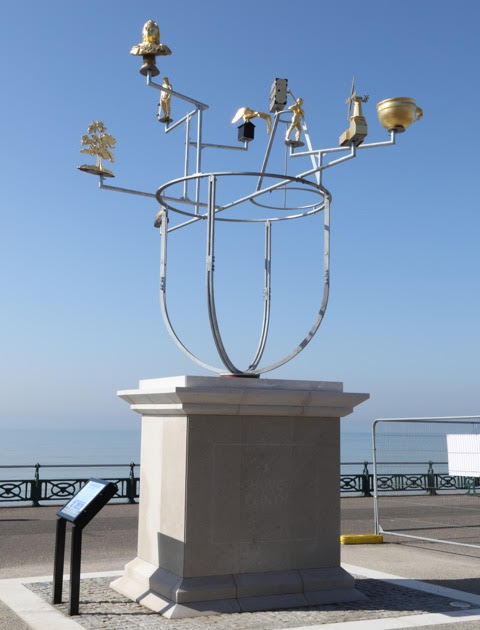 After five years of planning and fundraising, the first Hove Plinth sculpture will finally be officially unveiled on Hove seafront tomorrow afternoon.

Jonathan Wright’s sculpture Constellation, which was created with the help of Hove residents, was put up yesterday as curious passers-by looked on.

It is intended to be the first in a series of artworks to be displayed every 12-18 months on the plinth, which has been erected by Hove Civic Society with money from fundraising, donations, grants and local businesses.

Karin Janzon, project director said: “We are thrilled to see the Hove Plinth come to life and become a permanent part of the iconic seafront. Some people thought we were mad to attempt it, but a little madness can go a long way. It’s the end of a long journey and the beginning of much more public art to come to our wonderful city by the sea.”

What's that? Oh wow, is that…? I think it is! It's Constellation getting hoisted into place on Hove Plinth! Come along on Saturday at 2pm for the launch to see it in its full glory with the fence gone and everything finished up. pic.twitter.com/hy4h3q8ubG

In celebration of Hove, Jonathan Wright’s sculpture features gilded icons representing past and present of this part of the city, set in huge orrery structure.

Seafront promenaders will literally be looking up at the stars of Hove’s own solar system. The icons were proposed by local residents through a series of workshops run by the artist.

Jonathan Wright said: “A big thank you to all the people who participated in the discussions about 'What makes Hove Hove'.  I was really inspired by the strong sense of identity and pride in Hove and the many ideas and stories brought to the table.

“Hove seafront is a fantastic site for public sculpture and I am honoured and incredibly excited to be the first in a line of artworks on the Hove Plinth.”

The plinth and the sculpture are at the forefront of modern technology. The plinth is set up with a “call me” button for mobile phones and the icons were created with 3D scanning and 3D printing technology, even including a live scan of a local skateboarder.

The public launch on Saturday 21 st April, will be a celebratory event, attended by Mayor of Brighton and Hove Mo Marsh and hosted by golden presenter Vince Venus with live entertainment from the Swing Ninjas, who will be playing their distinctive swing style music.

There will be treats and surprises in store, along with a display of art created by the children of St Andrew’s Primary School on the theme of what I like about living in Hove.

The public will also be able to hear the sculpture talk, on their mobile devices.

The next phase of the Hove Plinth project will be to find permanent sites across the city for sculptures coming off the plinth, and build up a legacy sculpture trail over time.