Brighton and Hove Albion’s £5 million summer signing Florin Andone made only his second appearance for the club as the U23s took on West Ham at the Amex this evening (Friday 14 September). 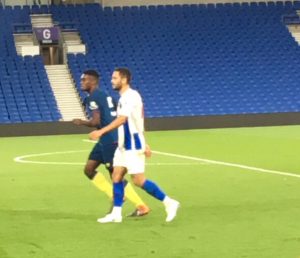 The Seagulls came from behind with goals from Viktor Gyokeres and Aaron Connolly to win 2-1.

One of his key attributes appears to be winning aerial battles and gaining possession for the team.

He played in only the first half but must now come into Chris Hughton’s first team reckoning.

Politics and the power of a thank you