‘Bloome’-ing marvellous night out in Brighton 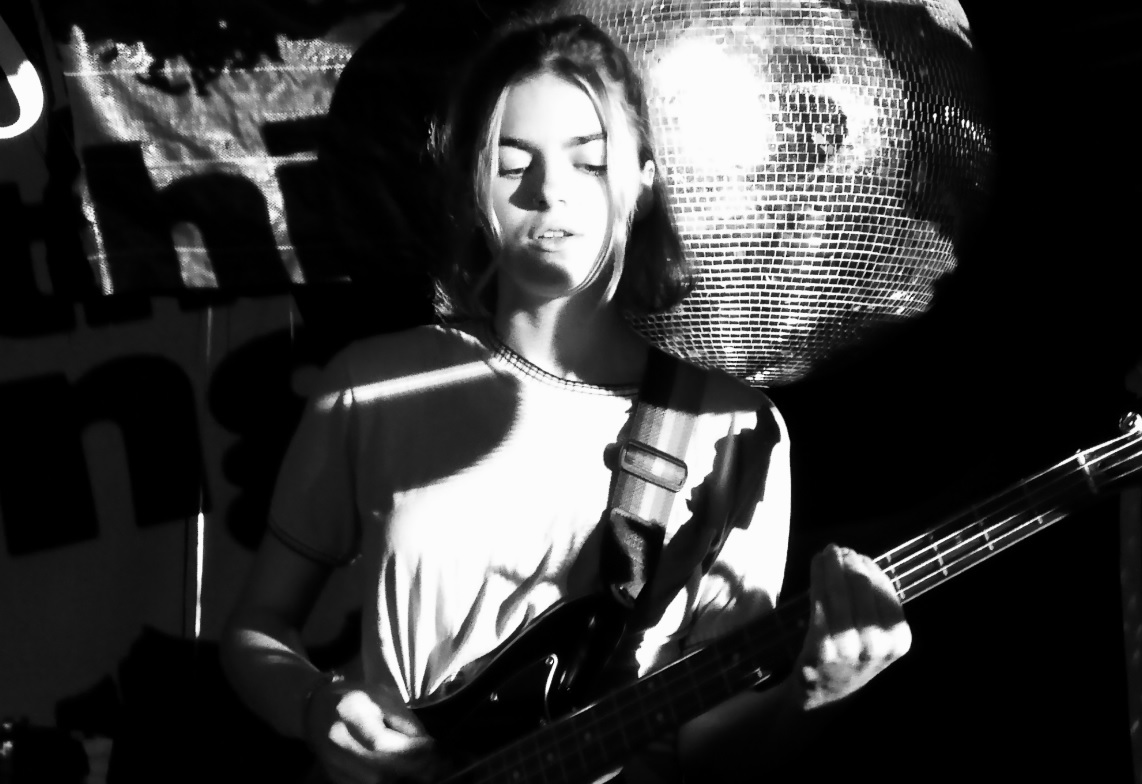 Our plan of action for this evening was to whizz between the Brighthelm Centre and the Hope & Ruin in Brighton to endeavour to cover two closely situated gig venues.

The Brighthelm Centre had ASBO Derek on at 7:45pm, then Lee Forsyth-Griffiths at 8:30pm and the Tom Robinson Band at 9:15pm and the Hope & Ruin were hosting Dove House at 8pm, The Peeps at 8:45, King Kuda at 9:30pm and Lacuna Bloome at 10:15pm. Having witnessed the entertaining ASBO Derek set at the Con Club in Lewes six months ago on 12th April in support of The Mekons, which included such wonderful ditties as ‘Velcro Shoes’, ‘Crook Of The Elbow’ and ‘Bryan Ferry’s B*llbag’, read the review HERE and that we are going to seeing them at the Latest Music Bar in Brighton on 30th March 2019, details HERE, we decided to kick off our evening at the Hope & Ruin with Dove House.

Dove House and the three following up-and-coming young bands, were appearing as part of ‘This Feeling’ guitar music night. These are designed as a 30 minute showcase set for the budding artists to show off their talents in front of a mainly student age crowd.

We had witnessed a fab ‘This Feeling’ event last year at Patterns in Brighton, which featured the young pretenders to the IDLES thrown, namely BlackWaters, read the review HERE. 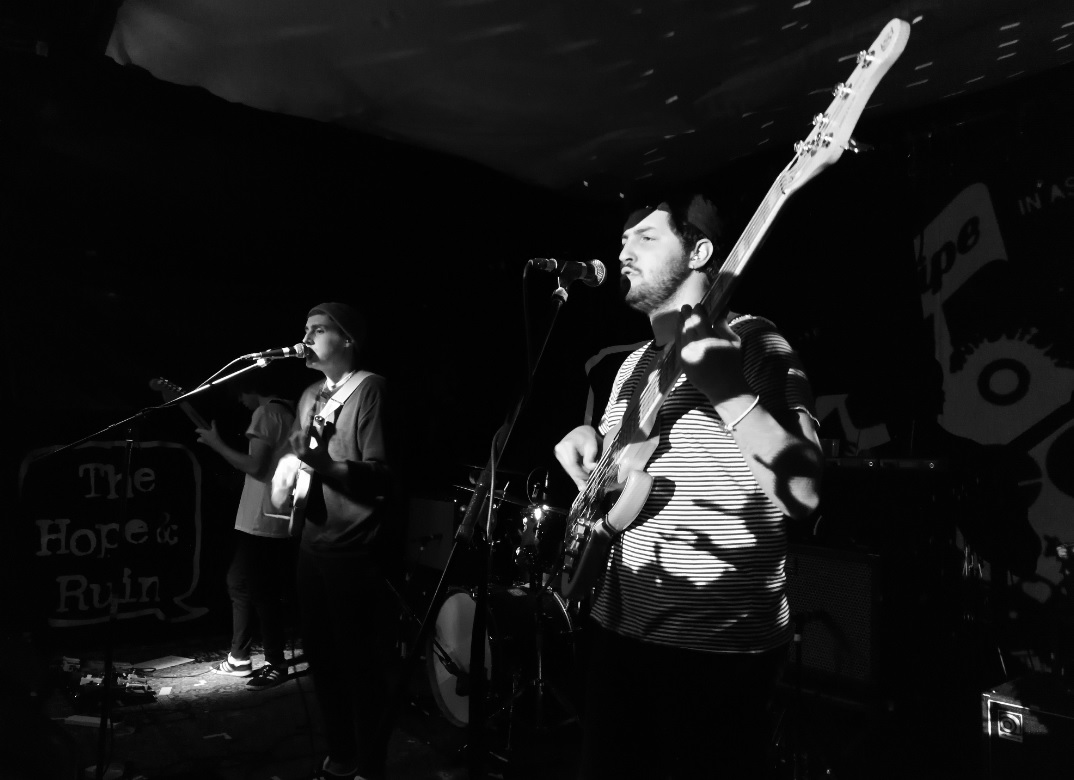 So to tonight’s proceedings, where locally based Dove House opened up the event. The personnel are Jack Peacock (vocals/guitar), Kieran Philbin (guitar), Ish Hussein (bass/vocals) and Steve Ray (drums). The lads began quite loudly with straight-up indie rock tunes and then slowly but surely their proficient set headed into quieter numbers which reminded me of a blend of The Kooks meets the initial releases by The Police mixed with the occasional vocal talents in the style of Edwyn Collins. This was a promising start to proceedings. Watch and listen to them HERE.

It’s now 8:30pm and decision time. Do we stay and wait for The Peeps or head on over to the Brighthelm Centre up the road to witness the Lee Forsyth-Griffiths set? Molly Walker from Lacuna Bloome made up our minds as we had a conversation with her about her role in the band and what she is generally up to in her life. So we stayed put at the Hope & Ruin. 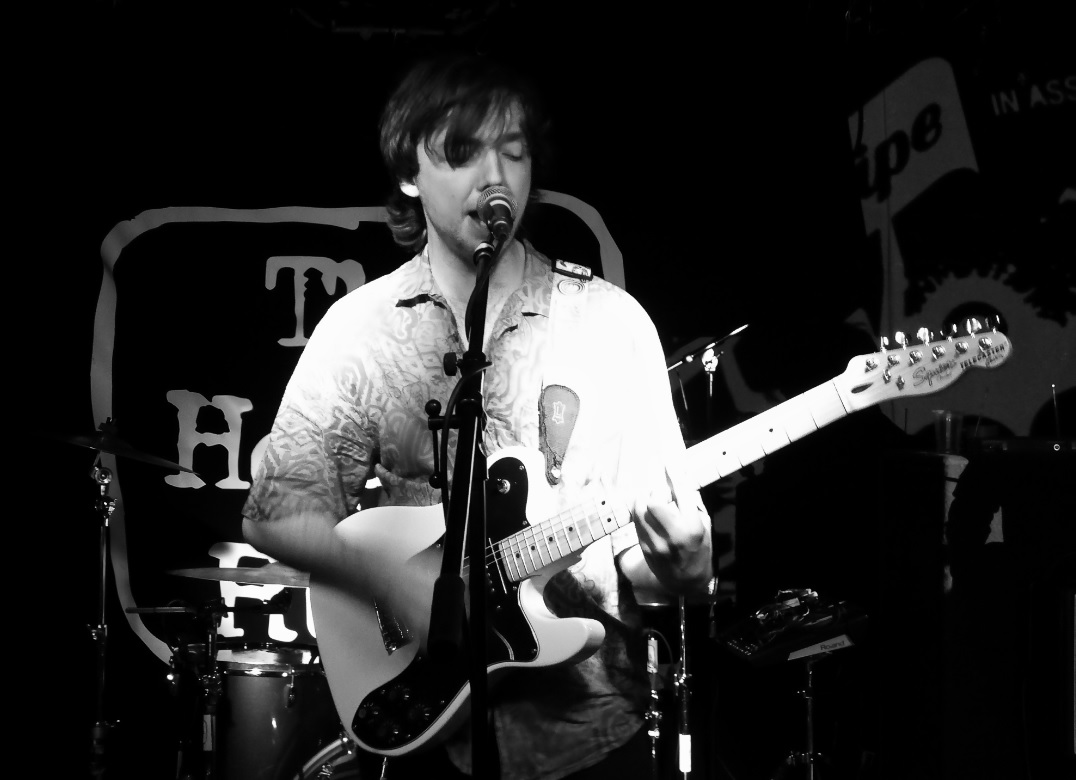 It was now time for The Peeps who we have not seen live before. These guys, Ryan Ede (lead vocals/guitar), David Andrews (drums/backing vocals), Luke Bennett (bass) and Jake Marlowe (keys/backing vocals), are a fun band that really don’t take themselves too seriously. This was a refreshing approach. The lads have a blend of music styles all wrapped-up into The Peeps experience. The presence of Jake’s Roland keyboard, gave the band a Rockney Chas & Dave feel. Having said that Jools Holland will no doubt like them (note the Squeeze influences) and there were nods to The Doors, The Blockheads as well as a slightly funky Stranglers vibe mixed in with The B52’s – yep that’s unique. Their set got better with every tune. Watch and listen to them HERE.

Tonight’s six song setlist was: ‘Slow Down’, ‘Willow’, ‘Printed On Paper’, ‘Lighter Later’, ‘Within My Eyes’, ‘Embarking On A Journey’.

Right then, it’s 9:15pm. Do we leg it up the road to see the Tom Robinson Band or stay and watch King Kuda and Lacuna Bloome? Suddenly we found ourselves in conversation with tonight’s gig promoter, who incidentally was a rather nice young chap, and we were recounting the highlights of the ‘This Feeling’ 2017 gig and the finer points of tonight’s line-up. Turns out that he is one the chaps responsible for bringing the aforementioned BlackWaters back to Brighton in a couple of weeks time, details HERE.

So it was decided, we were encamped at the Hope & Ruin all night and would sadly be missing the Tom Robinson Band set. We hadn’t seen TRB before and so this was possibly a sad loss, however having said that, we are rather partial to Lacuna Bloome, so things would work out for us. We just need TRB to return to Brighton soon. 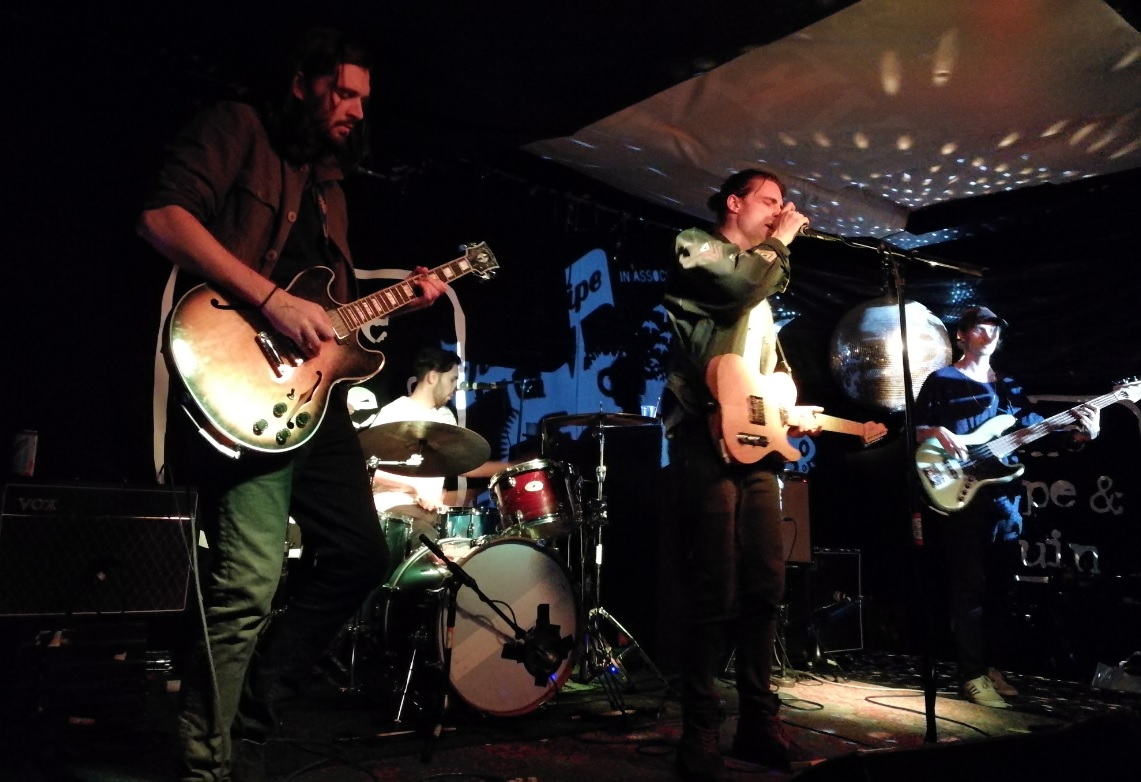 Conversation over and it was time to enjoy the King Kuda half hour set. The four lads are Ollie Gocher (vocals), Chris Burrell (guitar), Perry Anderson (bass) and Charlie Vasiliou (drums). They inform us that they met at uni and are purveyors of alternative dreamwave. On hearing this evening’s polished set, I would describe their sound as chart ready melodic indie funk with a hint of Embrace. I was talking to the cool looking singer Ollie about endeavouring to compare them with other acts and he was dead chuffed about this. Clearly a band wishing to sow their own path within the music industry. The guys have been crafting their sound for around three years, having started with a great track called ‘Lately’ (which they performed tonight), although they have only been on the gigs circuit for a few months. Watch and listen to them HERE. 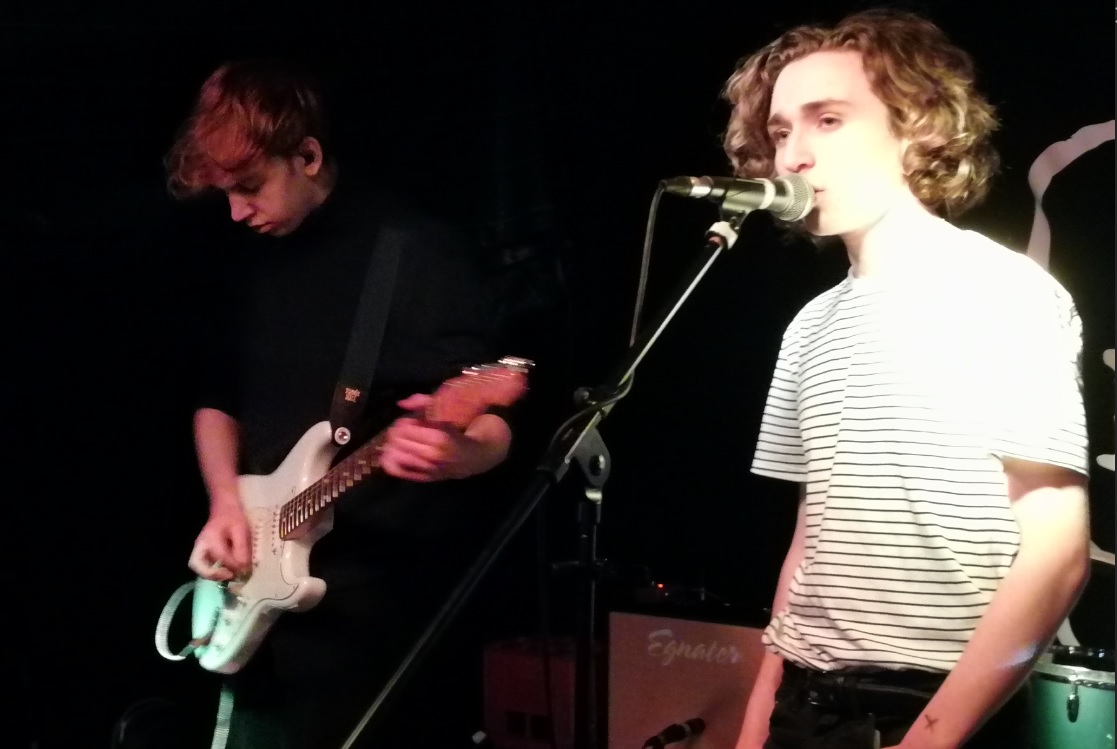 We reported on tonight’s headliners Lacuna Bloome last month, when they were performing at (the shortly to close) Sticky Mike’s Frog Bar in town on 14th September. Read the review HERE. Brighton based indie-pop quartet, Lacuna Bloome, are currently unsigned, but based on the two live sets that we have witnessed, I suspect that if these teenagers wish to get a contract, then certain record labels will (and should) be shortly knocking on their door! 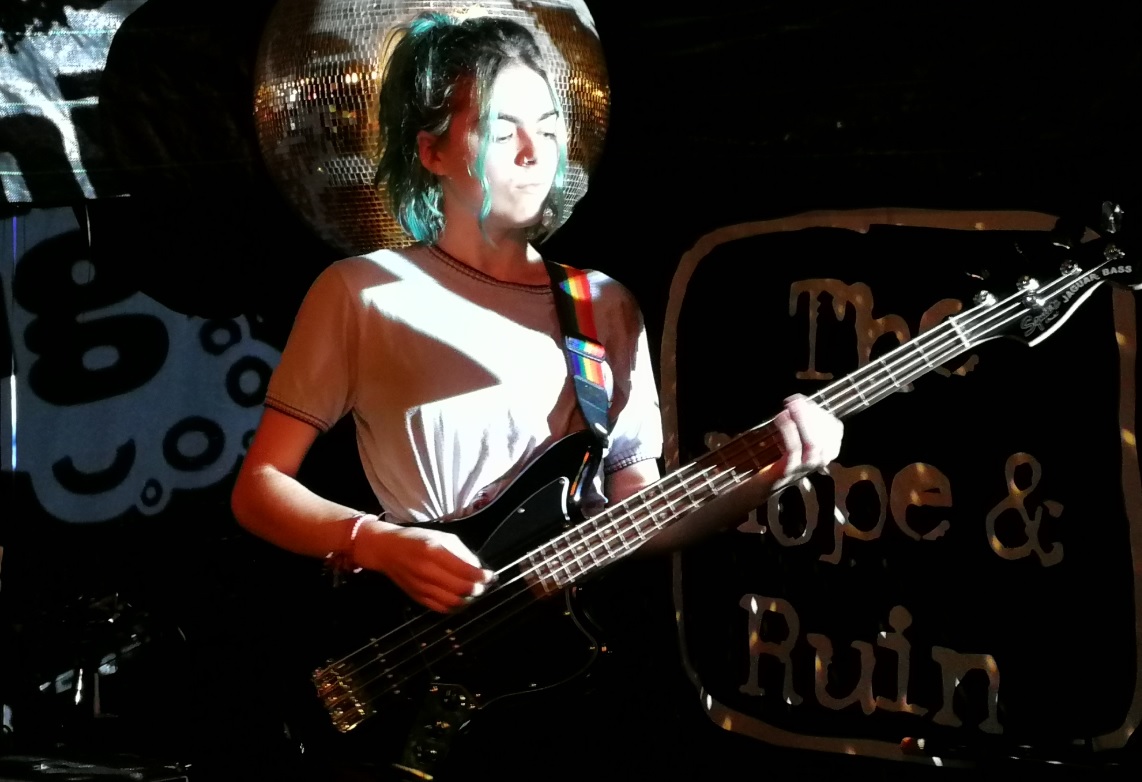 Founded by Niall and Sam, the lads have recruited aquamarine haired bassist Molly and drummer Noah for that perfect music match and look. Lacuna Bloome have in my opinion successfully filled the void vacated by the early recordings of The RPMs. Their sound is a pleasant blend of all things Oasis, Stone Roses and The Primitives. A year ago they released their debut single ‘Only One’, which was followed this spring by ‘Alright’ and a few months ago they unleashed the really catchy ‘I AM’. Their next releases will be ‘Find Your Way’ and also ‘Pink Sky’ (which incidentally is about dreaming) and will soon be out on Spotify.

This evening, Niall once again has a pleasing stage presence and was running the show. In fact him and Sam debuted ‘Sun On Her Back’ as a duo, which reminded me of The Smiths. The four of them absolutely nailed ‘I AM’ and their finale ‘Fin’ will be enjoyed by Liam and Noel Gallagher fans far and wide! 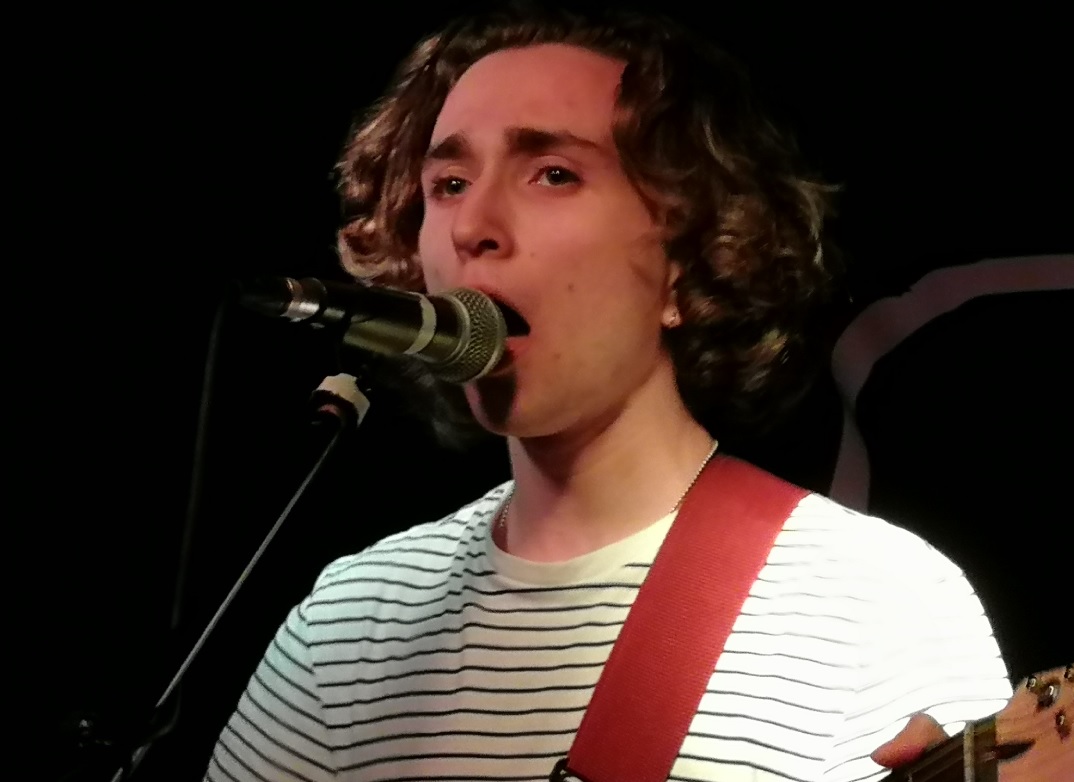 A great little band that certainly has the potential to go far. You can see what I mean by catching them on the forthcoming 9 date ‘This Feeling – Alive’ tour, which kicks off in Cardiff on 20th November and pulls into Brighton a week later at the Green Door Store with King Kuda also on the bill. Brighton tickets HERE. Watch their locally filmed video HERE.

More info on ‘This Feeling’ HERE and HERE. 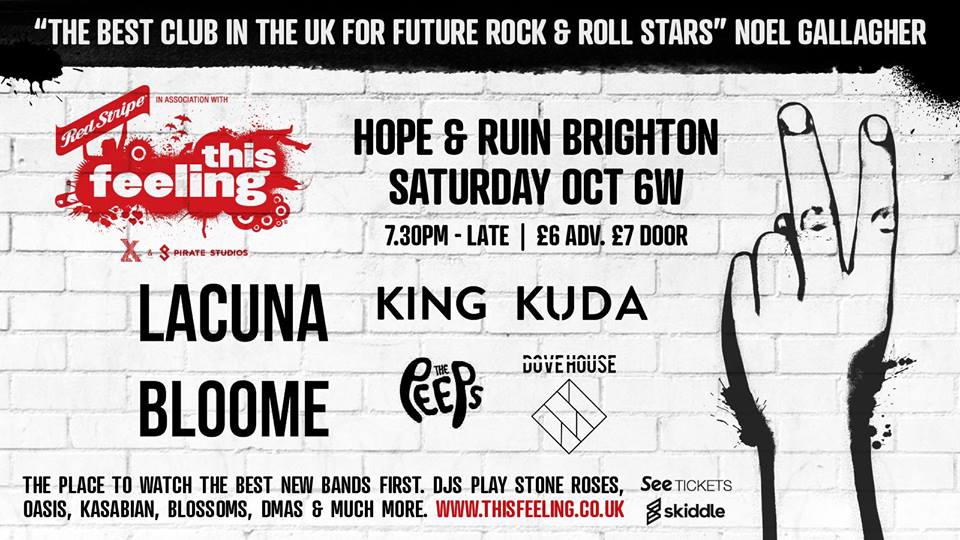 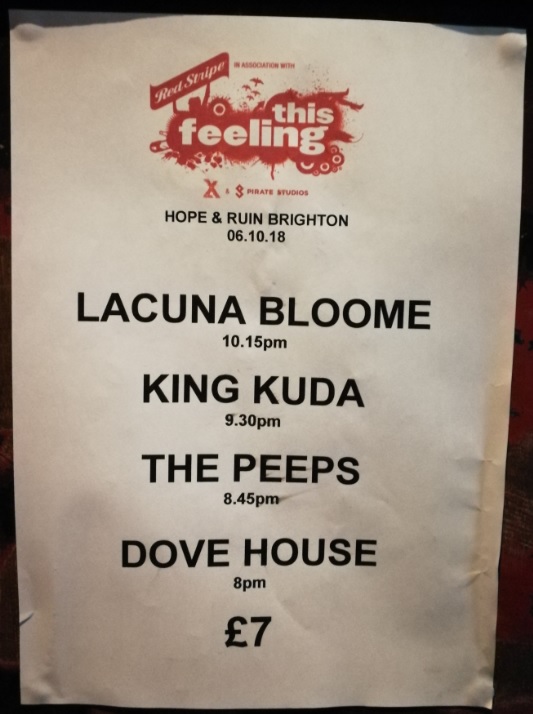 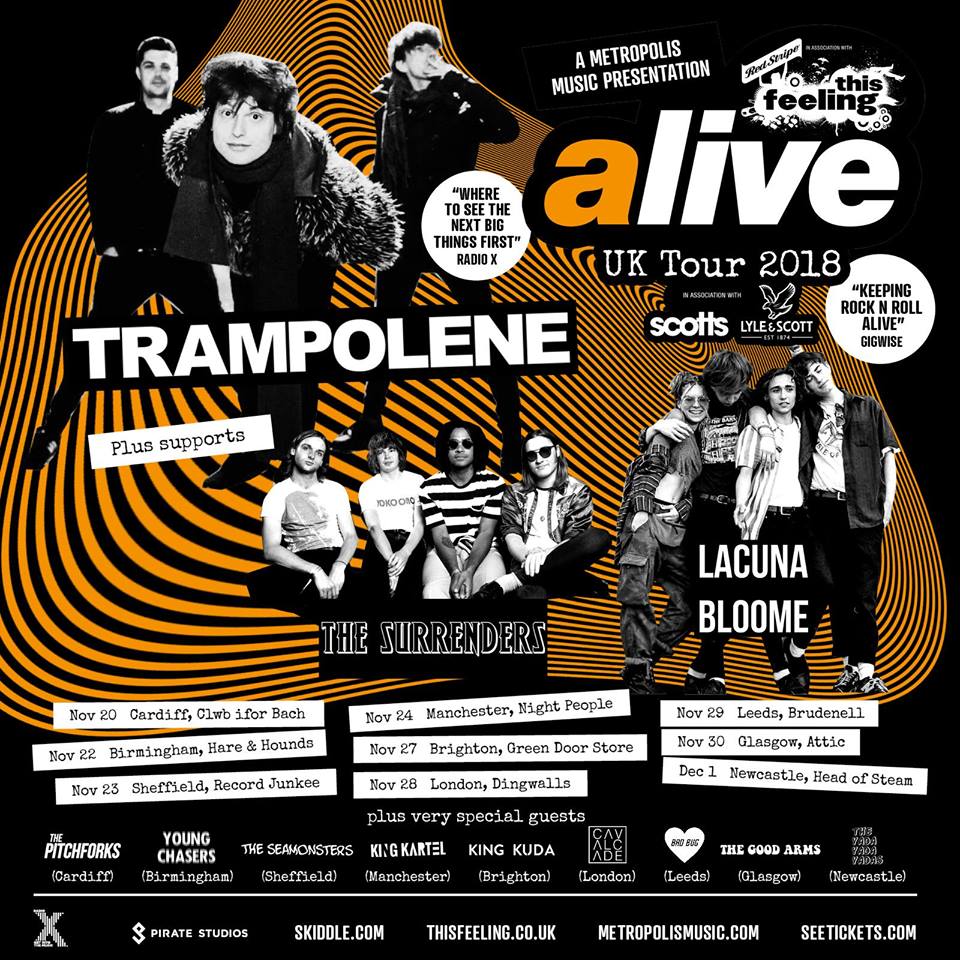