Brighton concert goers were in for a real treat 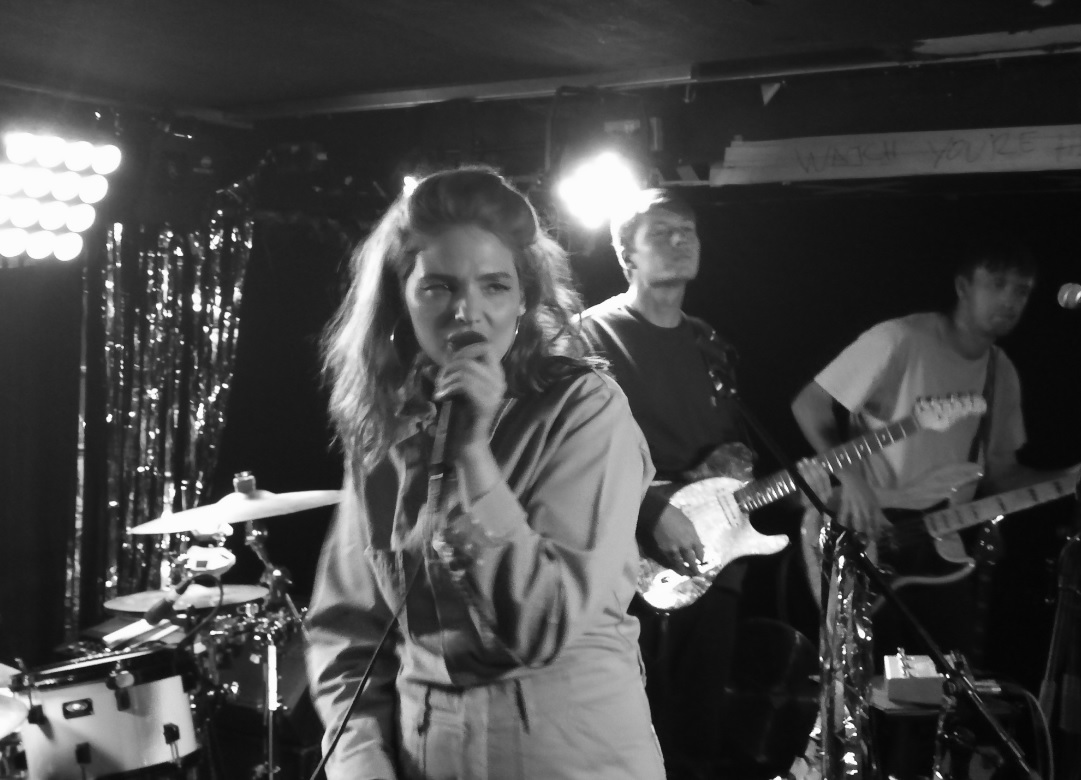 Well, what can I say about an evening that had four superb bands that didn’t play a bad tune all night! It was quite incredible the amount of new talent on offer at Sticky Mike’s Frog Bar in Brighton.

This was my debut concert from those rather nice gig organisers Hidden Herd and a memorable one it was too. 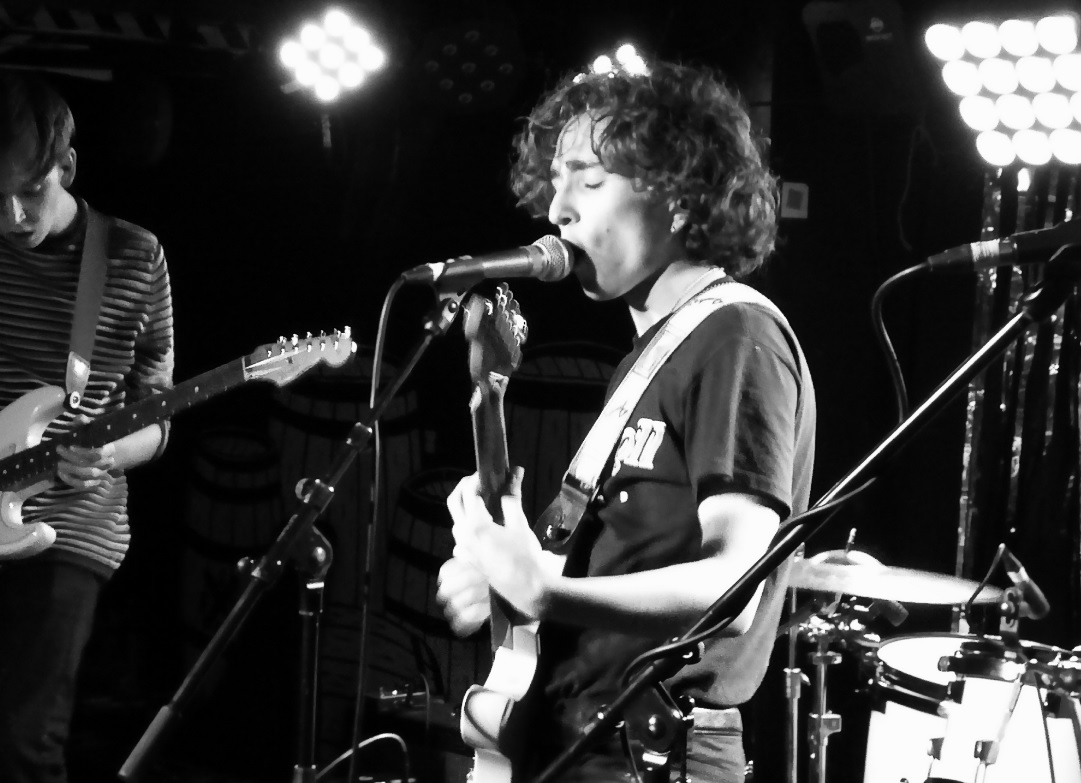 First up were Lacuna Bloome who are an unsigned youthful Brighton based indie-pop quartet. Founder members Niall and Sam knew what was good for them and they had the calling to relocate to sunny Brighthelmstone. On their journey they recruited several musicians with the current being Noah and former Varndean school girl Molly Walker. Niall and Sam simply knew that Brighton was the right place to bolster their lo-fi shoegaze ranks. 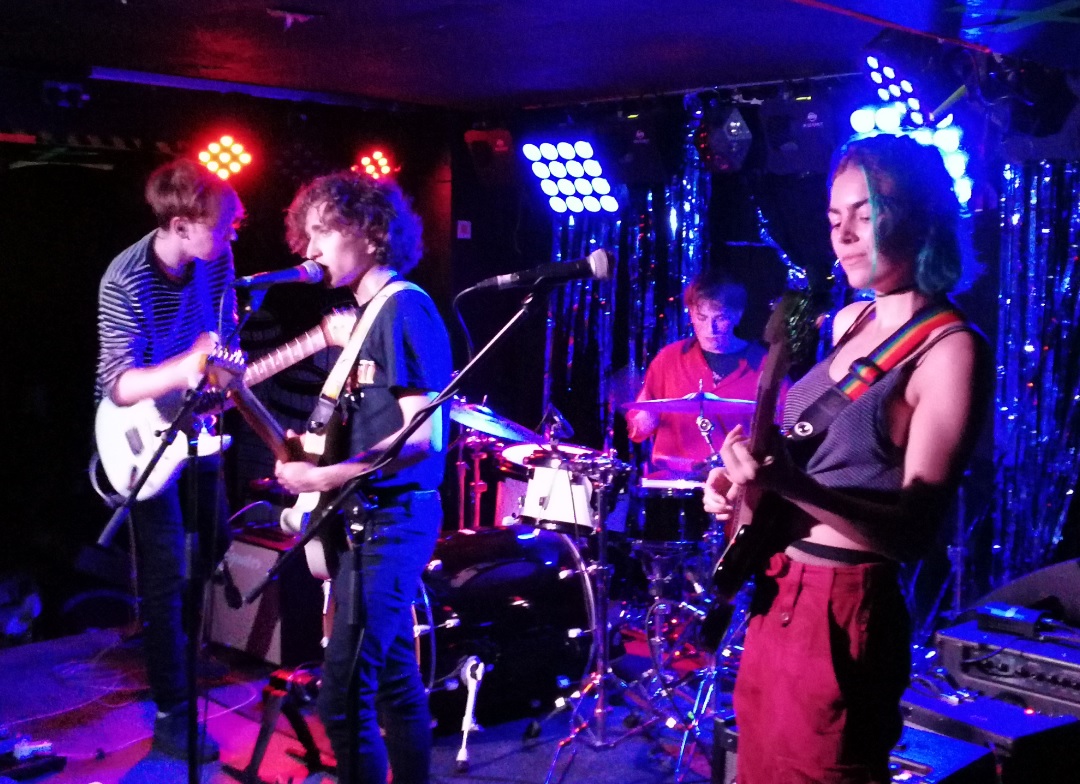 I can report that Lacuna Bloome have in my opinion successfully filled the void vacated by the early sounds of The RPMs. Their sound is a pleasant blend of all things Oasis, Stone Roses and The Primitives. A year ago they released their debut single ‘Only One’, which was followed this spring by ‘Alright’ and now a couple of months ago they unleashed the really catchy ‘I AM’.

Lacuna Bloome were limited timewise to just performing six tunes for us lucky Sticky Mike’s punters. This really didn’t matter to me as I was thankful to finally be able to witness the guys play live as there was a clash of concerts at this years Great Escape festival, which meant that I didn’t get to see them. 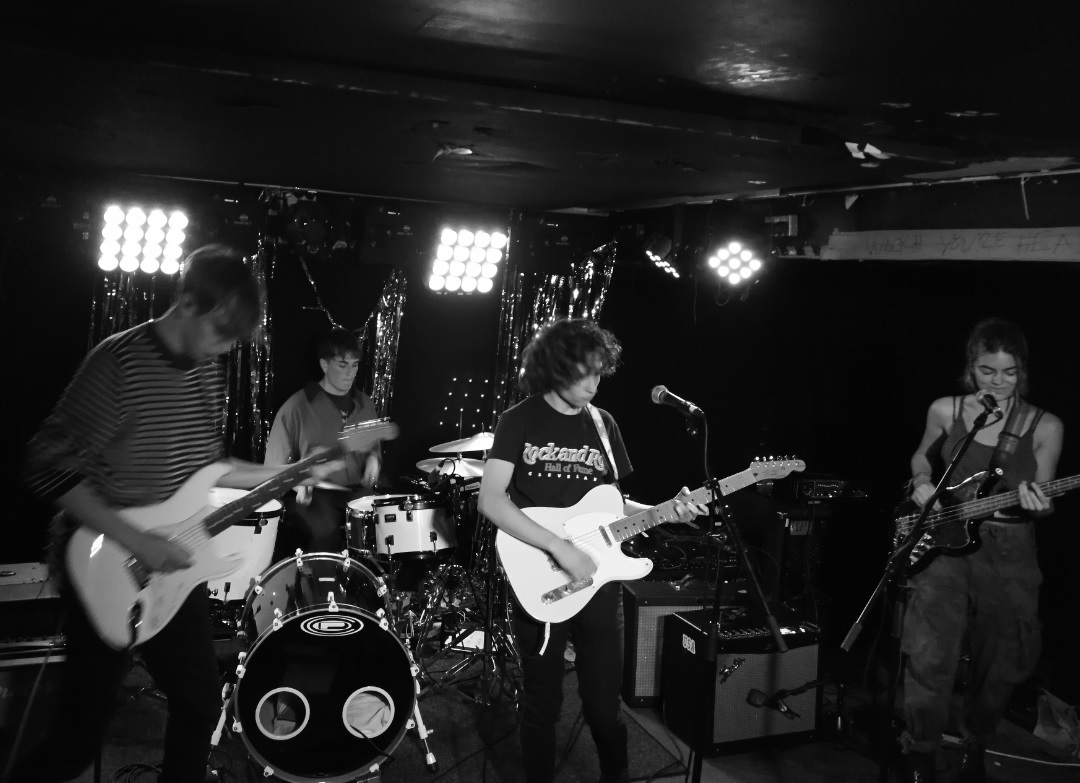 Their performance as tonight’s openers certainly set the bar high. Niall was enthralling the audience with his lyrics and Molly who was sporting the aquamarine look, certainly has an endearing coy demeanour. 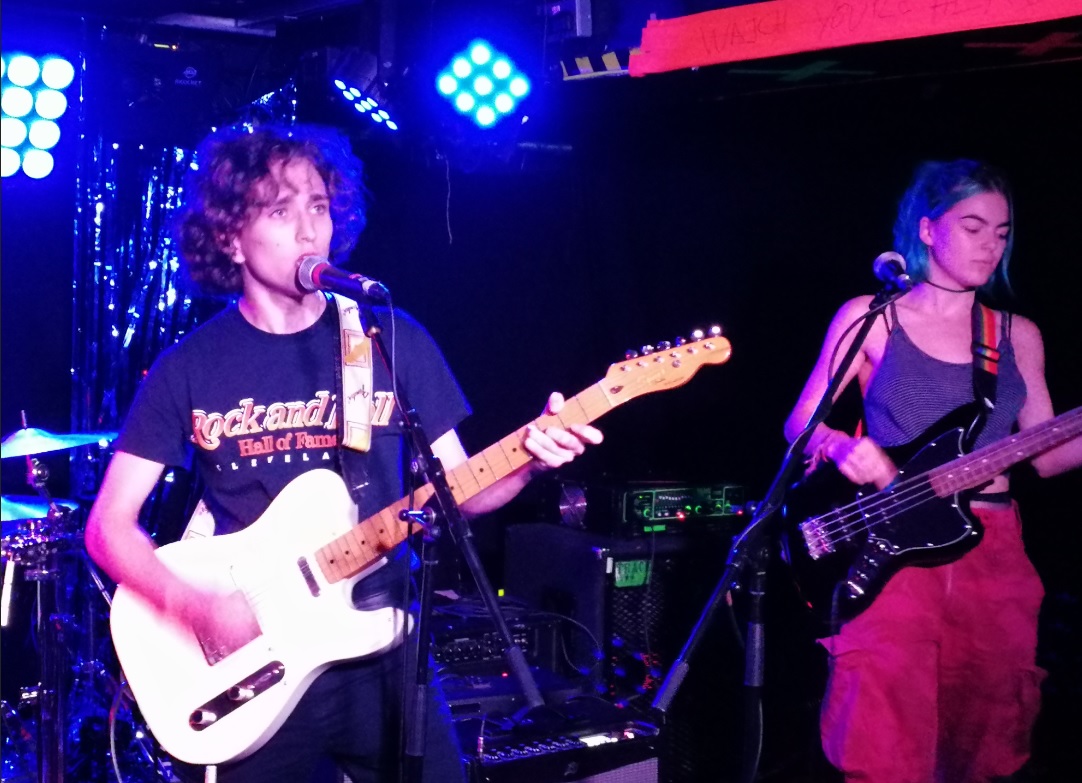 Lacuna Bloome are a band on the up as they will be the headline act on ‘This Feeling’ tour when appearing on 6th October at the Hope & Ruin in Brighton. More details HERE.

You can find our about the guys on Facebook, and listen to them on SoundCloud and
Spotify. 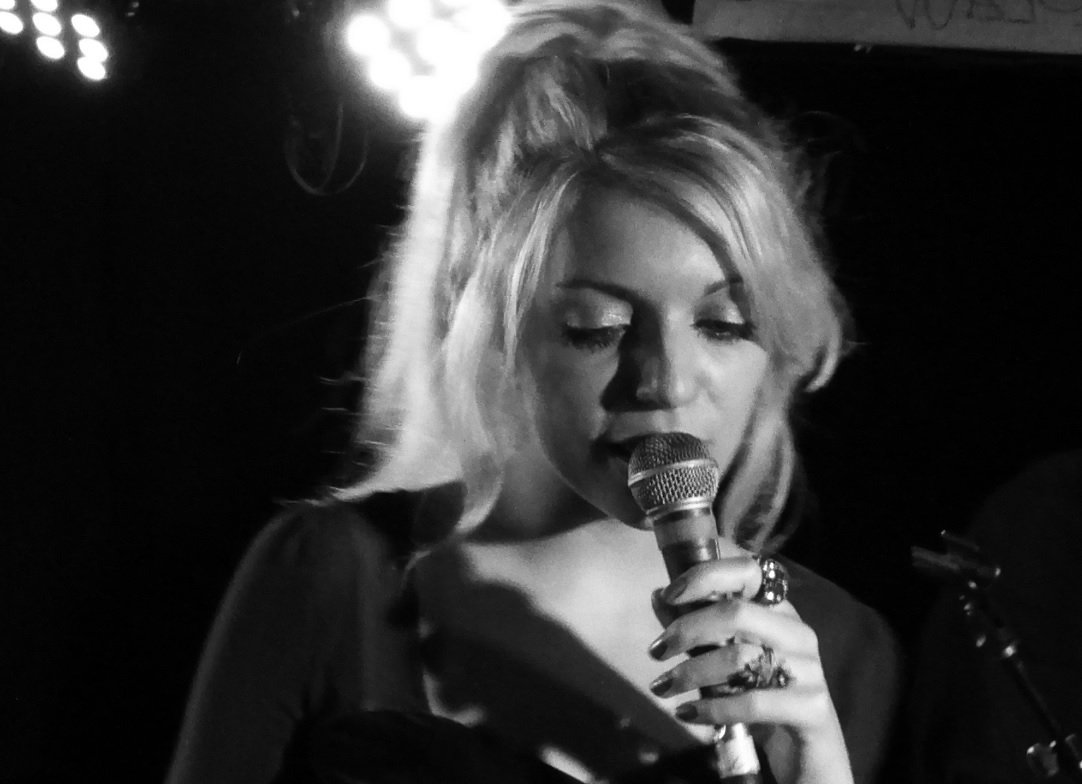 Next up was a band that I am rather familiar with, they are a four piece known as Circe. They were until quite recently based in Brighton, but the allures of the Big Smoke have tempted them into the opposite direction to Lacuna Bloome.

They are fronted by the charming Alexa Povey, whose ethereal voice is something not to be missed and combined with her alluring stage persona, she simply oozes seduction during the bands all too brief five song set. 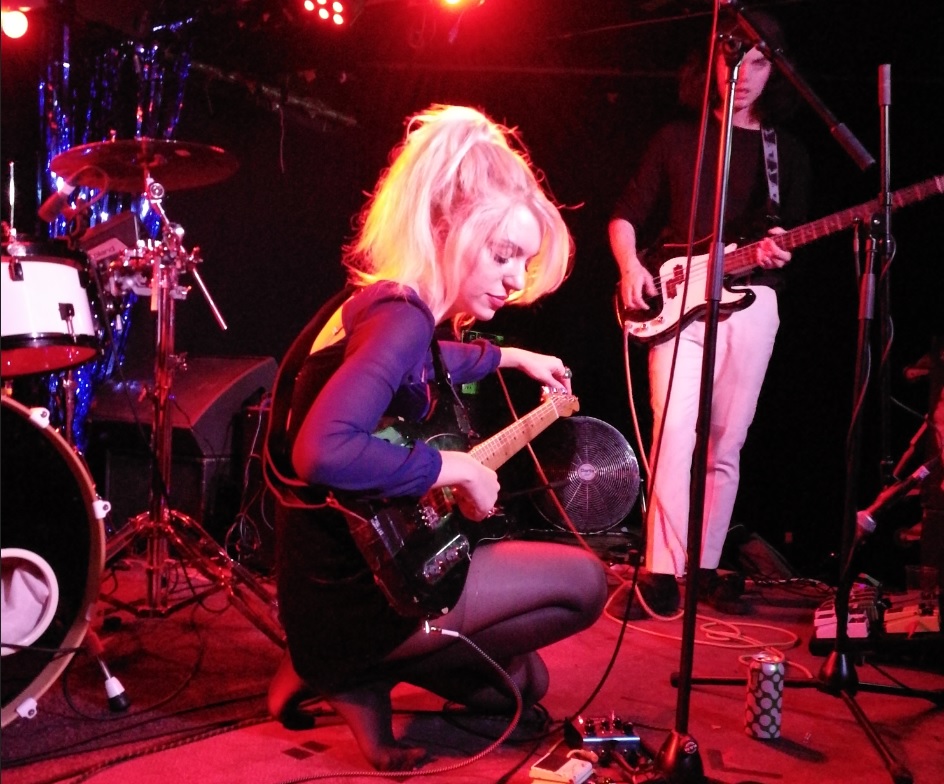 Having seen them live before, I knew what to expect, however, I did feel as though tonight’s performance was a tad more synthy than previous outings and I for one are all in favour of this. Although that’s not saying that these guys are a synth band, as they are not, but the inclusion of the AKAI MPK249 was a dominating factor in their sound. I could be wrong, but I thought that they have previously been using a Novation synth. Not that I have anything against the Novation, especially when I witnessed East India Youth trash one at his finale in London a few years back. 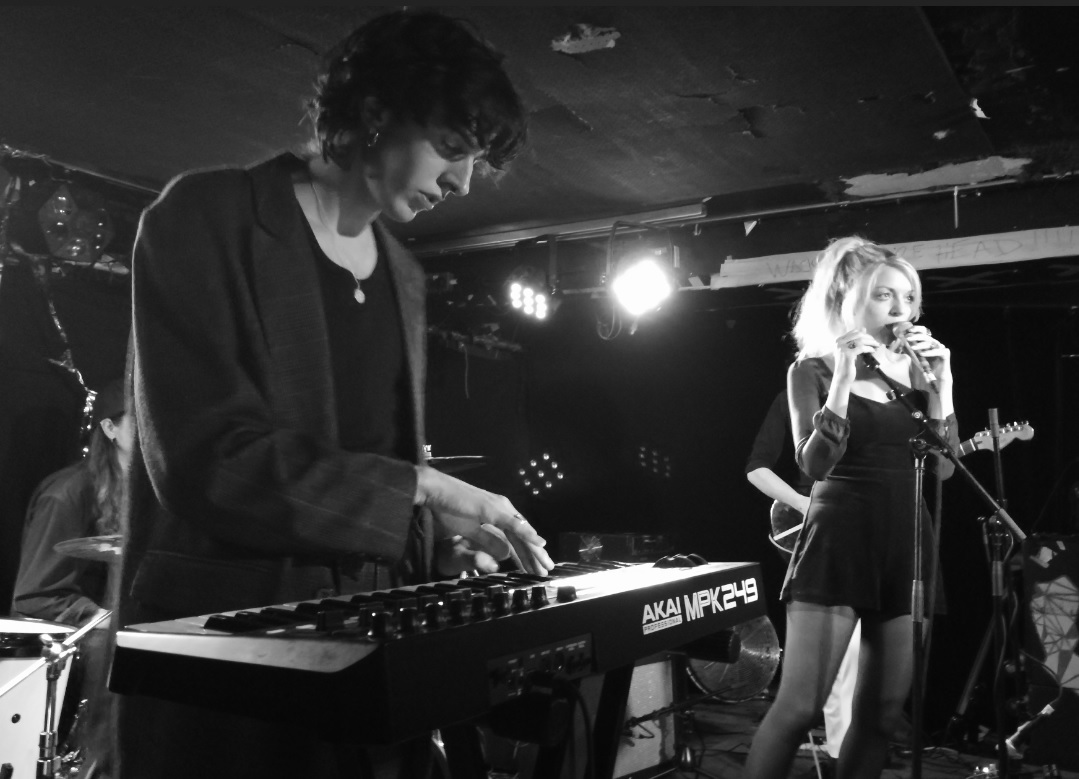 Currently Circe do not have a plethora of material, but what they do have is top dollar. I rather like their ‘Under My Skin’ and especially tonight’s final offering ‘Blood And Wine’. This track was for me the best tune performed by anyone on the night. It simply gave me goosebumps!

So in summing up, you will be hearing more from Circe very shortly as they have some exciting news for us on the horizon. 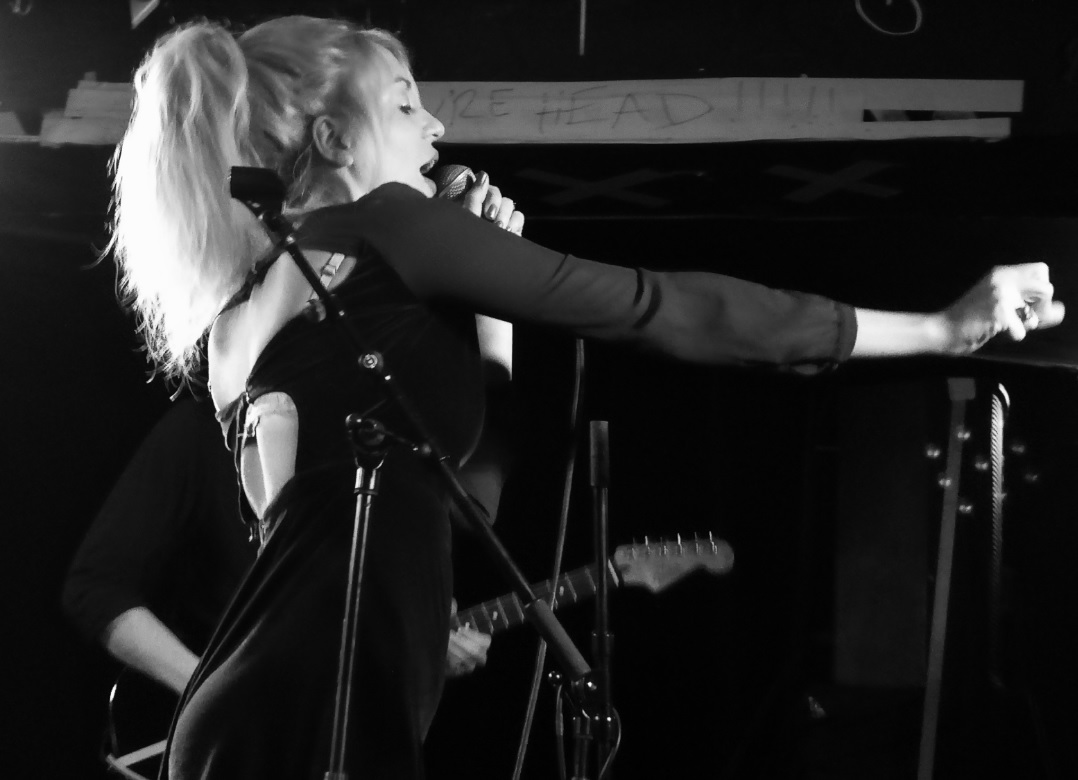 Tonight’s Circe setlist was ‘Preaching’, ‘Under My Skin’, ‘I Don’t Wanna Die Here’, ‘Barely Breathing’, and ‘Blood And Wine’. 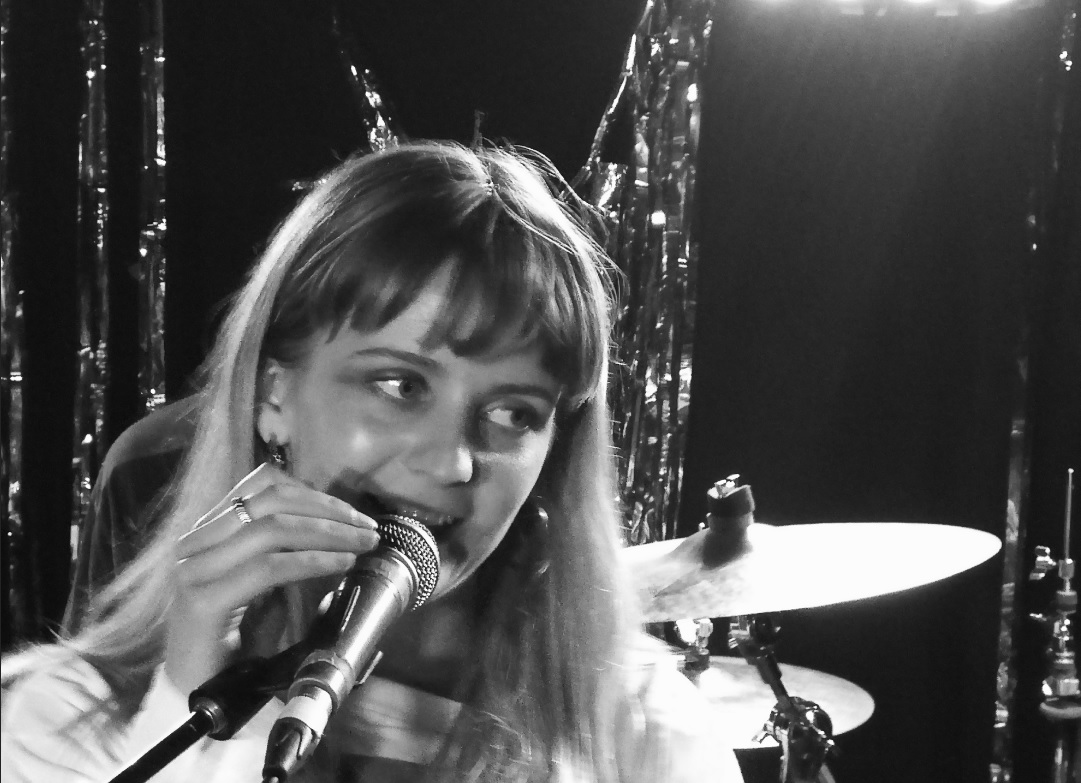 It was now time for Brighton based 4-piece alt-rock band THYLA to grace the stage. I have been rather fortunate to have seen the band perform twice before and so I knew that I was once again going to be entertained more than adequately by Millie Duthie, Danny Southwell, Dan Hole and Mitch Duce. 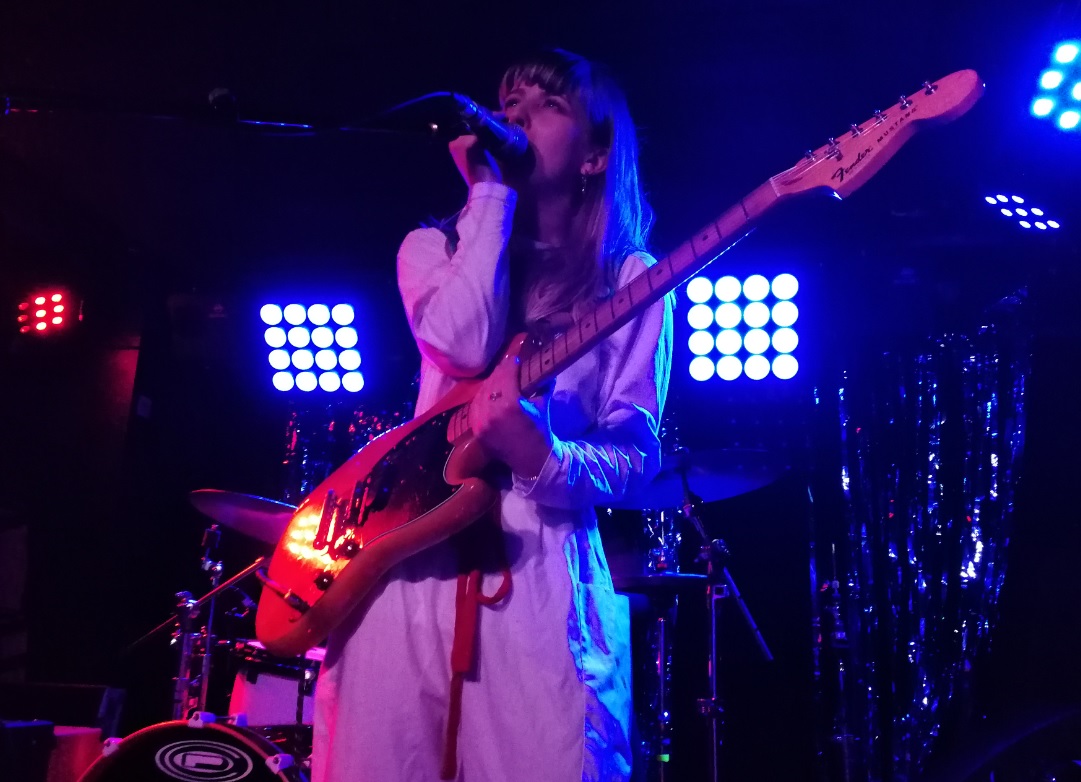 Here we go again, but THYLA are also an act on the up and they are certainly catching a few famous eyes of late, as they were picked as one of NME’s ‘100 Essential Acts For 2018’ and also they were selected to play as support to The Slaves at their recent ‘Acts Of Fear And Love’ album launch party in London. 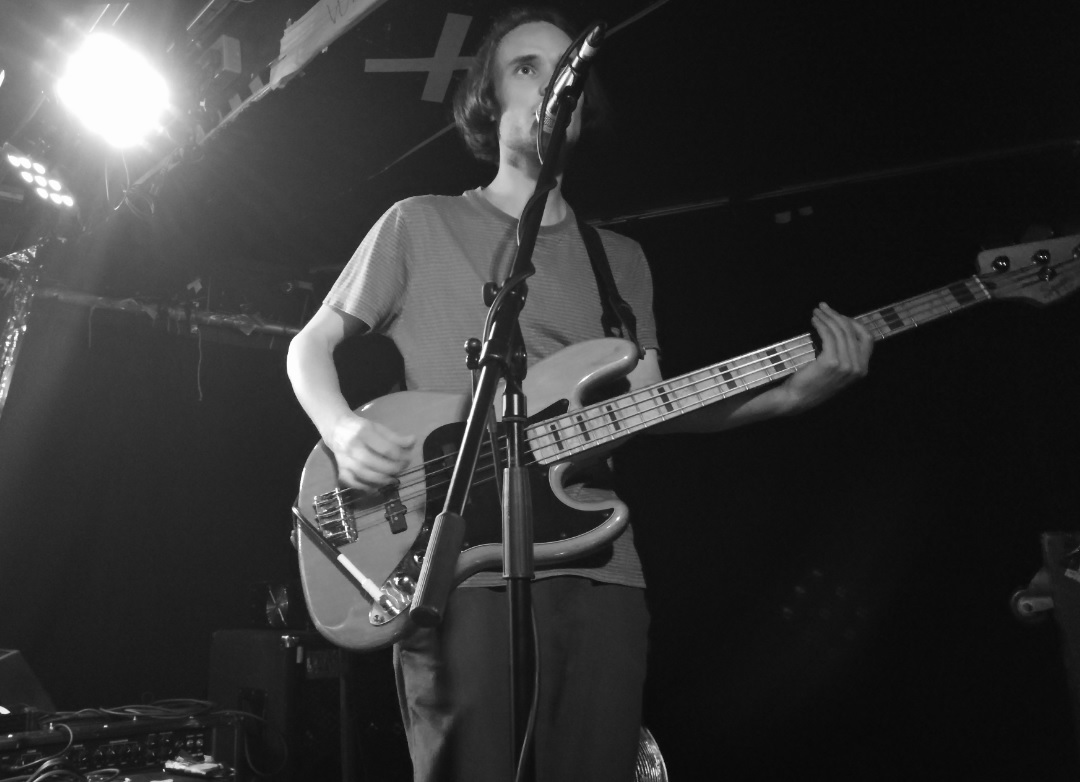 THYLA pronounced ‘Thigh-La’, performed an enjoyable seven song set for us lucky Sticky Mike’s punters and the band were clearly having fun whilst performing their alt-rock tunes. Sadly they did not perform ‘Tell Each Other Lies’ or the Cocteau Twins-esque ‘Pristine Dream’ but this did not detract from their perfect blend of Blondie meets The Horrors sound.

Millie was sporting a striking white jumpsuit with red sash/belt, which reminded me of one of Gary Numan’s jumpsuits meets the traditional folk outfits donned by Basque males for special occasions in northern Spain. Although there was no sign of a red beret this evening. 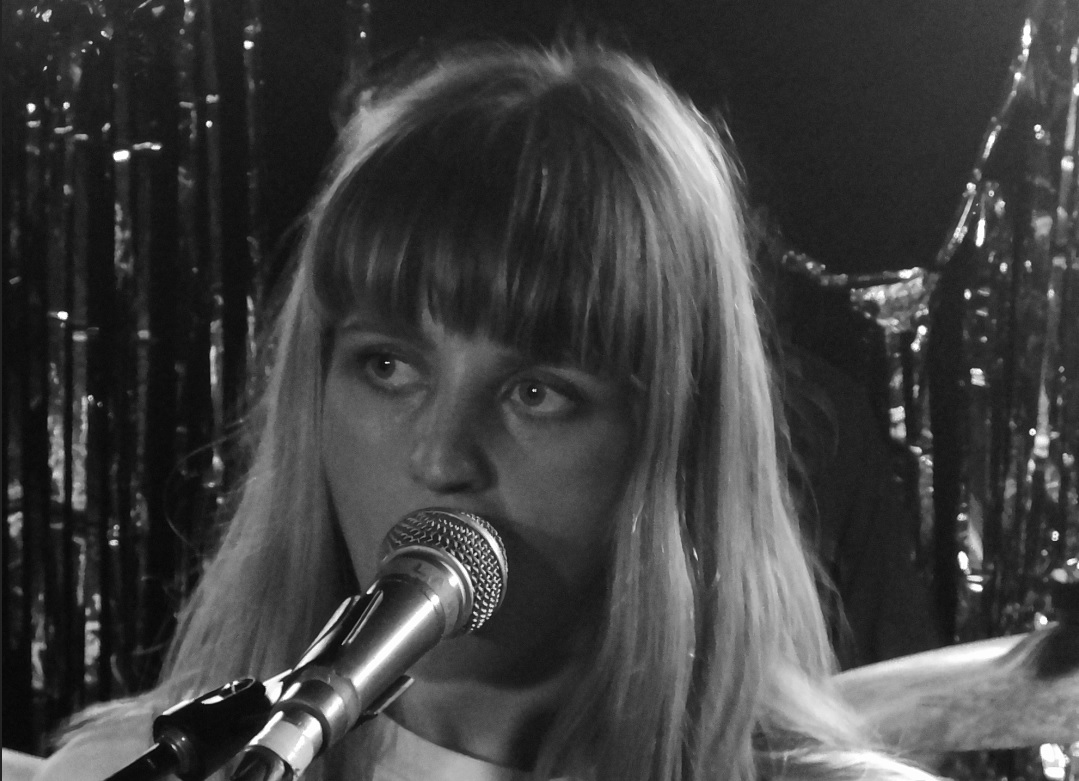 You can hear some more from THYLA HERE and find them on Facebook HERE. 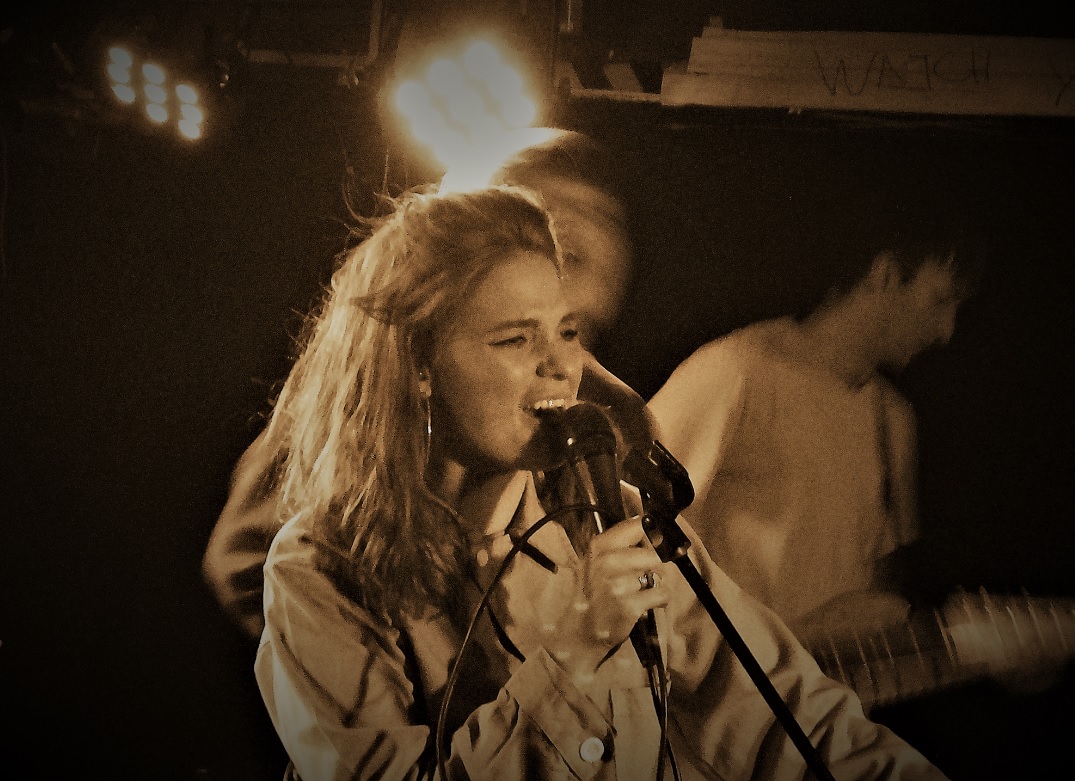 After another swift change of gear and it was time for the Reading based commercial guitar-pop headliners Saltwater Sun to entertain the faithful. And yet again, here we have an act that is clearly also on the way up as they performed on the BBC Music Introducing stage at the Reading Festival and Leeds Festival this August Bank Holiday Weekend. 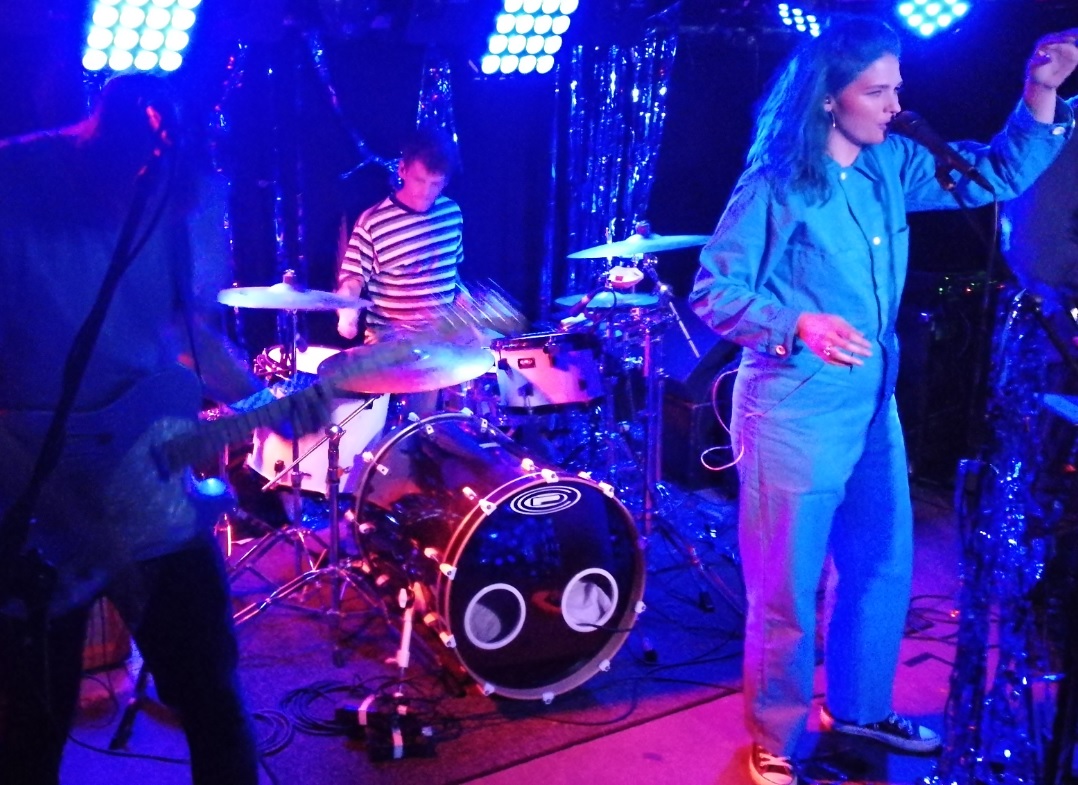 They were headlining in Brighton on their debut tour and yet it felt as though these guys were further on the road to music recognition than tonight’s previous acts. They just seem to have the potential for great things in the future. Yes I know that they have already gained some airplay on Radio 1 and that NME pointed out that this five-piece made “the soundtrack to summer evenings”, but I just have an inkling that this might just be the start of their journey. A journey that the band themselves wish it will encompass an appearance on the John Peel stage at Glastonbury. Based on tonight’s performance, I would suggest that this is not a whimsical dream but a strong possibility. 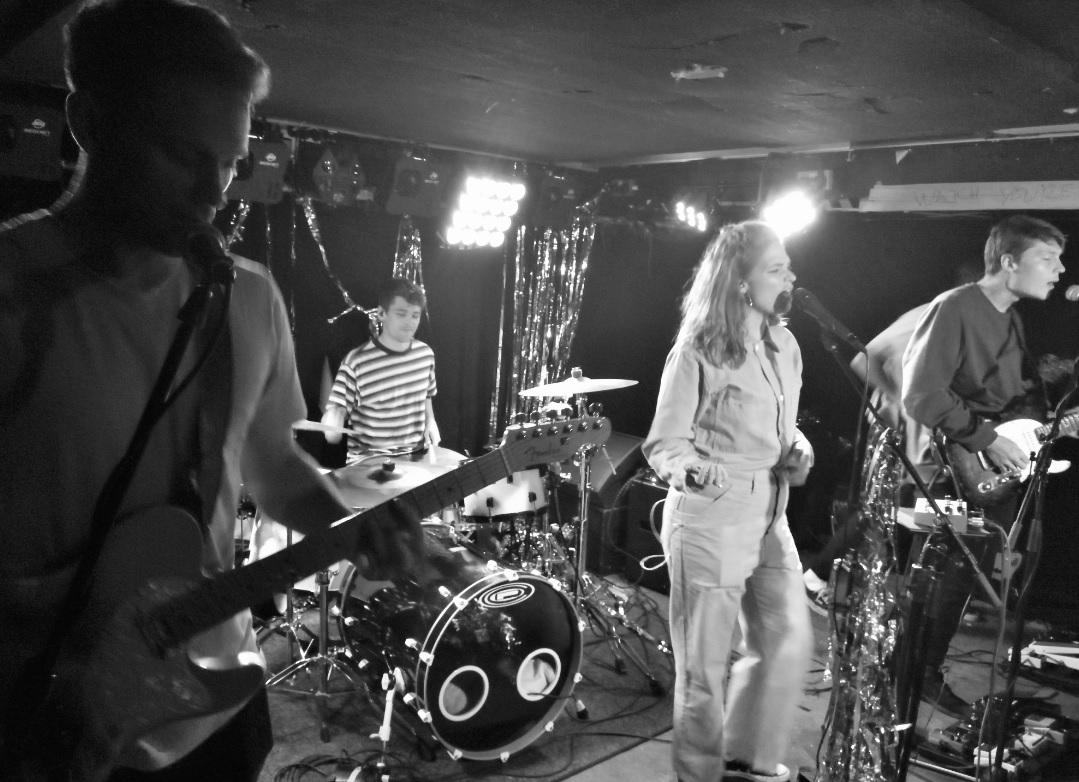 I was pleased to catch these guys live as they were another act that I missed at this years Great Escape festival, when they performed on the Saturday at Horatio’s on the pier. I’m not sure what frontwoman Jen Stearnes attire was back then, but tonight, it’s another boilersuit. This time it’s striking blue to match her hair. Now here’s a strange coincidence, whilst watching their ten song set, I thought that Jen was a blue version of Milly Toomey’s Girli pink and both acts have recently recorded songs called ‘Hot Mess’. Watch Saltwater Sun’s latest single HERE.

Musically I would place the band alongside Wolf Alice and a 21st century version of Blondie. Come to think of it Jen does bare a slight resemblance to Debbie Harry at the height of her fame. I mean her stage presence tonight is as confident as Debbie and along the lines of Dua Lipa too, so all in all I would say in good company. 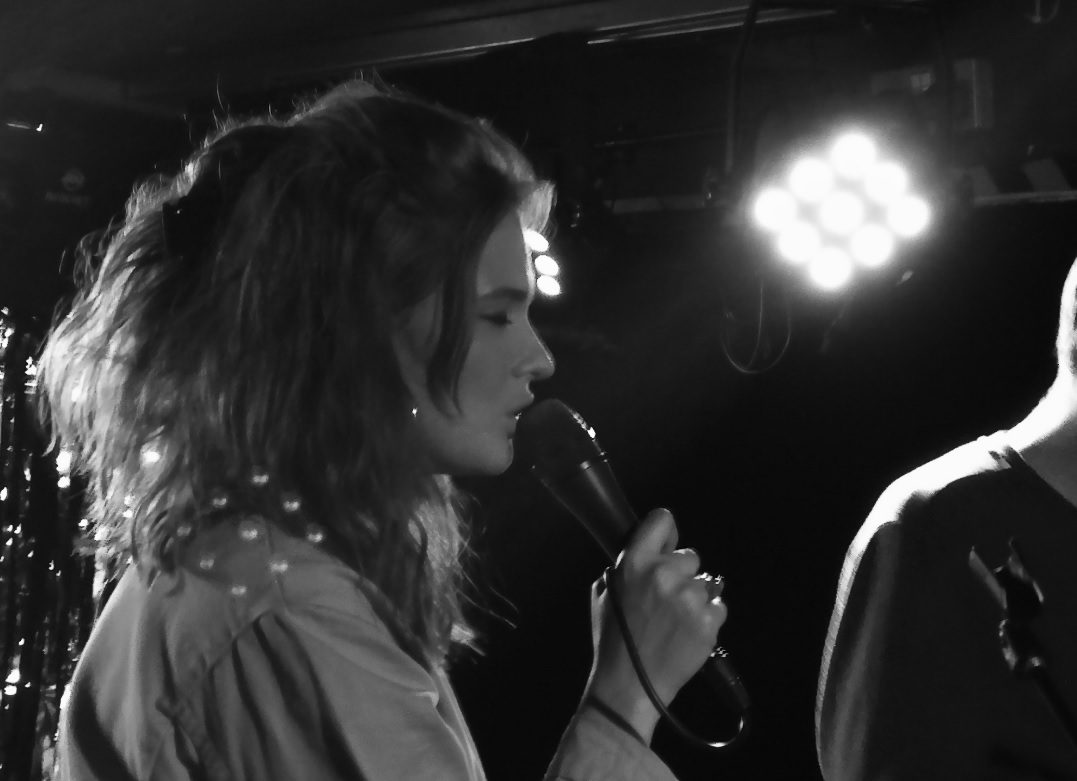 The only real surprise of tonight’s set was the inclusion of Daryl Hall & John Oates No.1 US hit single ‘Maneater’ from 1982.

In conclusion – a fab night out organised by Hidden Herd, who incidentally are also putting on a charity bash with Brighton’s very own British Sea Power. Details HERE. 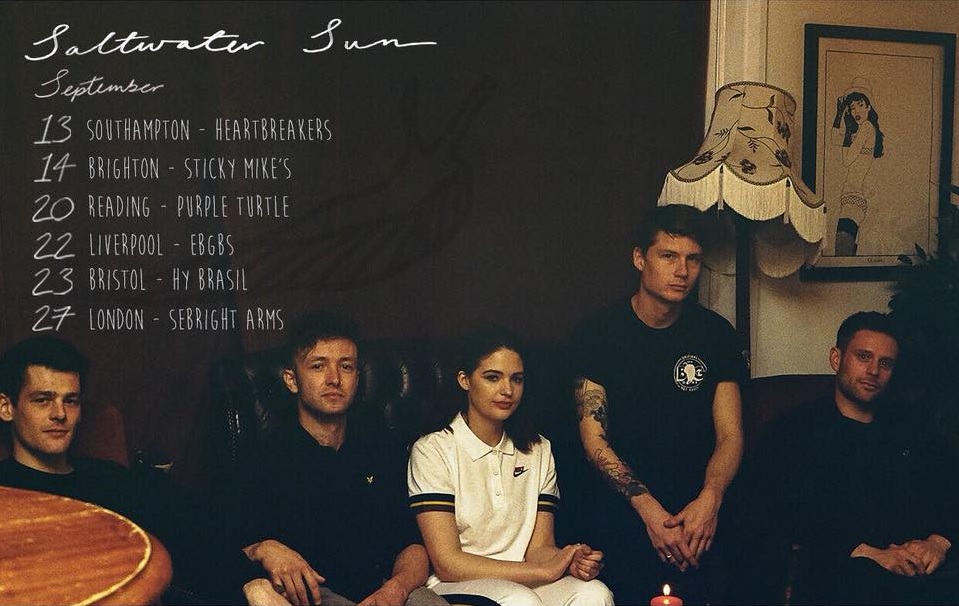 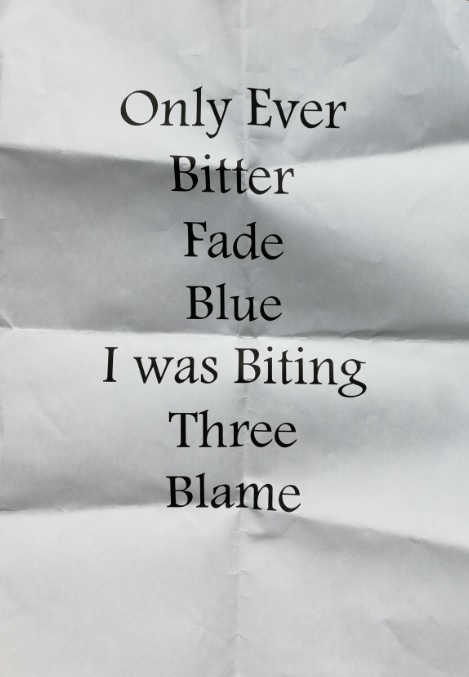 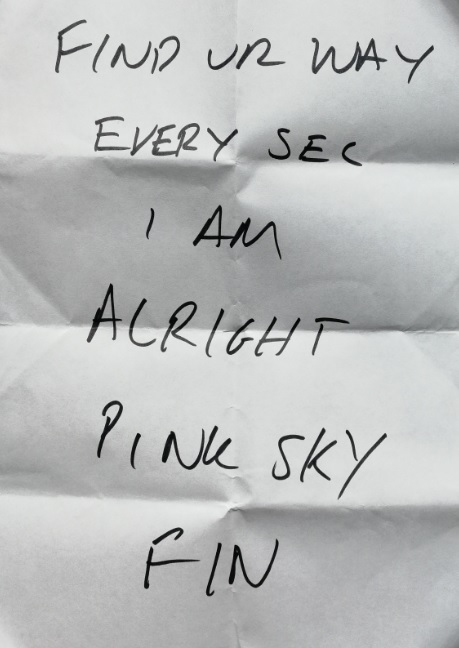