Hundreds of people took part in a rally in defence of public services in Brighton earlier today (Saturday 13 October).

The Brighton Pavilion Green MP Caroline Lucas was among the speakers at the event organised by Sussex Defend the NHS and the Brighton and Hove Trades Council.

She said afterwards on Twitter: “So pleased to speak at @SussexDefendNHS rally this morning in Brighton.

“Theresa May wants us to be grateful that ‘austerity is over’. Truth is austerity was never necessary – it was all about an ideological attack on public services in order to shrink the state.”

Madeleine Dickens, from Sussex Defend the NHS, said: “This government and all the councils failing to stand up to the massive cuts inflicted on them are slashing and privatising our public services out of existence.

“They are shamefully depriving the most vulnerable in our society – people with disabilities, elderly people, families below the poverty line, the rapidly growing number of homeless – of their most basic rights.

“People seeking refuge from war and famine, and those like the Windrush generation, who have been here for decades, are treated like second-class citizens or worse.

“What sort of society are we becoming? Enough is enough.”

The march and rally – entitled “It’s a matter of life and death” – started at The Level and after a one-minute silence at the Clock Tower in North Street, Brighton, continued to Regency Square.

The rally’s organisers said that they had the support of 24 trade unions, political parties, community organisations and campaigns from across Brighton and Hove.

Caroline Lucas told supporters: “We’re here to protest against the way this government has wrecked our public services. A government that is dismantling the welfare state, flogging off public services, privatising services, attacking the rights of migrants, impoverishing our children. And we’re here to say, ‘Enough is enough – the fightback is on!’

“We’re here because we’re angry. Angry that this government continues to break up and marketise our NHS.

“Angry that Brexit will make this even worse – putting off EU workers who no longer feel welcome here. Freedom of movement is a precious gift – the right to work and study and live and love in 27 other countries – we should be defending it, not trashing it.

“Angry that health workers have to rely on handouts and foodbanks. And that’s why our message is loud and clear – invest in public services and stop the cuts.

So pleased to speak at @SussexDefendNHS rally this morning in #Brighton

Theresa May wants us to be grateful that “austerity is over”

Truth is austerity was never necessary – it was all about an ideological attack on public services
In order to shrink the state https://t.co/hEniKOgISo

“And the damage that has been done to our hospitals and schools is immense. They’re at breaking point.

“It’s wrong that head teachers are forced to sack teaching assistants, to end support to pupils with mental health problems, that parents are having to organise jumble sales for basics like books.

“So as well as saying Defend our NHS, we are absolutely here to say Save Our Schools as well.

“So what can we hope for from (Jeremy Hunt’s) replacement at the Department of Health, Matt Hancock? Well, don’t hold your breath.

“This is the health minister who has received £32,000 in donations from the Institute of Economic Affairs – an organisation which describes the NHS as one of the most ‘over-valued, inefficient systems in the world’.

“A health minister who’s been actively endorsing the GP at Hand app operated by the private company Babylon, which requiring patients to deregister from their existing practice before they can sign up.

“With a tally of 10 GP practices having closed in our city in the last few years alone … (he should) start investing properly in our National Health Service.

“Friends, we know things could and should be different. And we know that by coming together we can make them different. We are the sixth-richest country in the world.

“I’m proud to be standing up in Parliament to fight for our public services. I’m proud that the Green Party has championed the NHS Reinstatement Bill from the very beginning.

“And I’m proud that all of us together are saying – loudly and clearly – no to the government’s ‘slash, trash and privatise agenda’ – and yes to keeping our schools and our NHS public. Always.”

Councillor Phélim Mac Cafferty, the Green Party convenor on Brighton and Hove City Council, said: “Years of brutal cuts have pushed key services to breaking point. Under the guise of ‘savings’ and ‘integration’, our NHS is at risk of being dismantled and sold off to the highest bidder.

“Sadly, the impact of this attack on public services is all too clear. This year, health chiefs at the Royal Sussex County Hospital said staff shortages and high demand led to ‘the toughest winter’ on record.

“The city now has just one GP to every 2,500 patients. 33,000 nurses left the NHS last year, combined with a 96 per cent drop in applications from the EU as Brexit looms.

“Whether it’s councils, hospitals or adult social care, so many of the services struggling to meet rising demand are being brought to their knees by a cuts and privatisation agenda.

“Scandalously, it is residents reliant on local services who will pay the price.” 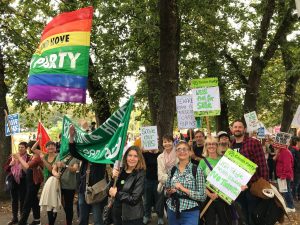 Greens at the Defend the NHS rally

Matt Webb, from the Trades Council, said: “The misfortune of sickness should not become a burden of poverty and indignity.”

He said that trade unions supported the victims of the Grenfell Tower fire and the Schools SOS as well as the NHS, migrants and young workers at Wetherspoons.

He said: “We support the NHS and the people who rely on it to get from one day to the next.”

And he warned politicians locally and nationally: “Where we see injustice, we will organise.”

Sue Beatty, Brighton and Hove branch secretary of the Unison trade union, said that it was an ominous sign three days ago when Prime Minister Theresa May appointed a suicide prevention minister for the first time, adding: “We could not make this up.”