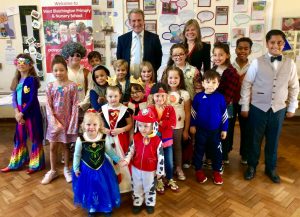 He was greeted by children in costumes representing the decades since the school’s current premises opened in the mid-1950s.

His visit coincided with a celebration event in the junior school hall before the demolition of the original buildings.

They are being replaced as part of a £30 million project which also includes new premises for the King’s School, a Church of England secondary school currently based in Portslade.

After being shown around by head teacher Rachel Simmonds and business manager Carly Regan, Mr Hinds said: “It’s a lovely school with a great atmosphere and an inspirational head.

“And when the new buildings are complete, the two schools are going to be amazing.”

On the same day as his visit – Thursday 18 October – West Blatch held a celebration at the end of the school day.

Ms Simmonds said: “With only six months left until we move in to our wonderful new building we feel it’s important that we celebrate the history of our school.”

The children have been learning about the different decades that the school has seen and shared their favourite parts of the school with each other.

A selection of photos and mementos were on display in the junior hall and past and present pupils and staff went along to share their memories. 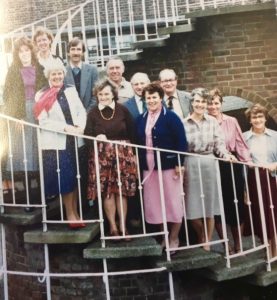 Ms Simmonds said: “We will be moving into our new building in spring 2019 and wanted to ensure that as well as looking forward to our fantastic future, we first spent time to capture, share and cherish the many special memories of both current and previous pupils and staff.

“I have to say a huge thank you to the staff for working tirelessly over the last couple of weeks to put on an amazing display of work and memories.

“Over the past week children have been learning about the decades since the school was built (1954) with each year group learning about a different decade. They have produced some beautiful work which is displayed around the hall.”

She also thanked the Friends of West Blatchington for their help as well as for their fundraising, with £23,000 raised over the past four years.

One former pupil, Tim Hodges, said: “It was a wonderfully nostalgic and quite evocative afternoon, going back in time 35 years and perusing pictures of old teachers and classmates.

“It’s such a shame the old buildings will be demolished and the expansive playing field lost but progress and the necessity for a modern new school is paramount.”

Another, Lella O’Neill, said: “It was lovely to be in the Hall, which felt so small now, but always seemed so big.

“Great memories of being on the stage and collecting team points. Great photos and remembering all the teachers’ names.

“It was lovely and I only wish they would do an evening and all our old school friends could come.”