Neighbours are fighting plans to replace a bungalow with two five-bedroomed houses. 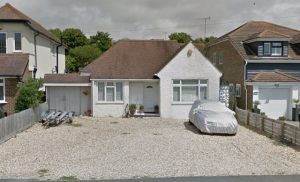 Days after the planning application for 70 Greenways, in Ovingdean, was made public by Brighton and Hove City Council, the first objection was lodged on the council’s website.

The anonymous objection said that the plans would be “spoiling a nice area by cramming in houses when surrounded by bungalows … solely for profiteering not improving the neighbourhood”.

The first two-storey home would replace the bungalow, with the second house in the back garden.

There are already four homes in back gardens along Greenways, including the property next door.

BPM said: “It is noted that a similar development at 68 Greenways was approved at appeal in 1997 and comments suggest that this should not set a precedent for backland development.

“We consider that this should be set a precedent given its similarity to this application and the fact that it is directly adjacent to the application site.”

The proposed two-storey house to the rear is set in to the existing sloping garden to match the house to the south.

Details and drawings are available by searching for BH2018/02671 on the council planning portal at planningapps.brighton-hove.gov.uk.