A wanted man who taunted Sussex Police on Facebook has been arrested in Whitehawk, along with a teenage girl. 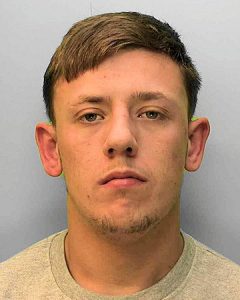 Sussex Police said: “A man who taunted police on social media that they couldn’t catch him has been arrested.

“Harry Avis, 20, who was wanted on recall to prison was arrested in Findon Road, Brighton, shortly before 1pm on Thursday (6 December).

“A 19-year-old woman from Brighton was arrested at the same time on suspicion of obstructing or resisting a constable in execution of duty.

“She remained in custody on Thursday afternoon.” 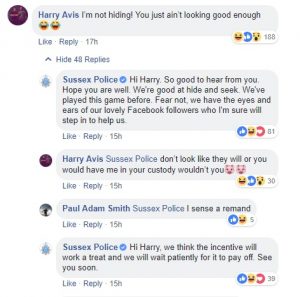 As well as responding to Avis’s original taunt, Sussex Police took to Twitter this afternoon to share the news of his arrest.

If you’re in touch with Harry Avis on social media and wondering why he’s gone rather quiet this afternoon we’re afraid that he’s been unavoidably detained – by us! He’s on his way back to prison. Know what I mean, ‘arry?! https://t.co/tYuwFMe1Dy