Green and Conservative councillors joined forces to lay the blame for delays to the King Alfred redevelopment at the Labour administration’s door.

It also asked for a named councillor to oversee the project and called on the council to maximise the proportion of affordable housing and sports facilities on the site.

The council chose Crest Nicholson to build a new leisure centre and hundreds of homes on the site of the current King Alfred Leisure Centre in January 2016.

But almost three years later Crest and the council have yet to sign a key contract despite extra funding being made available to the housebuilding company.

Councillor Nemeth told a meeting of the full council on Thursday (14 December): “The King Alfred is Hove’s biggest ever site scheme.

“No one who is accountable is immersed in it, driving it, chasing it and scrutinising it.”

He said that Alan Robins, the chair of the council’s Tourism, Development and Culture Committee, was the ideal candidate but Councillor Robins was not a member of the King Alfred Project Board or the Strategic Delivery Board.

The King Alfred Project Board had not met since 2016, which Councillor Nemeth attributed to the difficult questions asked by him and Green councillor Tom Druitt.

Councillor Nemeth said that Crest Nicholson was a “ruthless business focused solely on profit”, adding: “The situation, as it is, is scandalous. There should have been a deal in place when they were picked.

“This is exactly the sort of thing that should have been made clear.

“Signing within weeks was a requirement. It’s the sort of language Crest speak and understand.”

Central Hove Labour councillor Clare Moonan said the she was speaking on behalf of her community because the King Alfred was in her ward. She said that the current plans were one of several over the years.

“If it was under a committee, he’d be saying, why isn’t it under a cross-party project board?

“Whatever we’ve got, he doesn’t want it. He wants something else. Let’s stop focusing on the process. Let’s solve the problem.”

The Labour council leader Daniel Yates said that there were 49 days left to get the deal sealed and he criticised Conservative councillors for “petty political point scoring”. 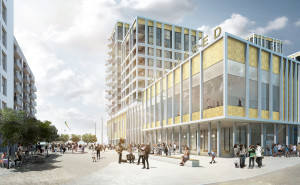 “The council as landowner, the developer or the other schemes that have come through and come and gone.

Councillor Yates said that he would not take credit or blame for the current King Alfred proposals and said that Councillor Nemeth had sat on the board responsible for the project.

“We should not be getting a leaflet out of it. We need to be delivering for this city.

“We should all take our piece of responsibility and take our share of the solution too. We have 49 days left.”

Labour tried to amend Councillor Nemeth’s motion to censure all parties but the amendment was defeated by Conservative and Green councillors.

The amendment also insisted that 20 per cent of the homes planned for the King Alfred site should be classed as affordable housing.

Councillor Gibson also said that there should be a “plan B” for the council to bring the scheme in-house if Crest Nicholson did not sign an agreement in January.

Councillor Gibson said: “The motion doesn’t properly recognise the responsibility and failings of the developer Crest Nicholson and fails to express the anger people feel about how they behaved.

“People tell me how cross they are how a developer is trying to wriggle out of an inadequate 20 per cent of affordable homes.”

He said: “This is an unacceptable way to treat councillors and the city and ride roughshod over my residents and the people of Hove who have suffered for far too long with the uncertainty surrounding their leisure facilities.

“If the market fails to respond to the demands we want on the site, the council should explore all options including in-house to ensure we have a secure development in the future.”

Councillors voted unanimously in favour of the Green amendment.

The final deadline for Crest Nicholson to sign up to the £230 million project to build a new leisure centre – with a swimming pool, basement parking and housing – is Thursday 31 January.