A man suspected of credit card fraud in Hove has been captured on security camera footage. 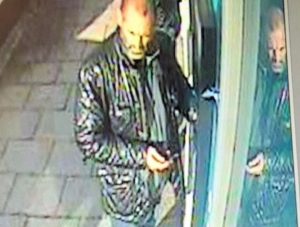 Sussex Police said today: “Police investigating the theft and fraudulent use of a Barclays credit card in Hove wish to identify and speak to the man pictured here.

“The card was used to withdraw £250 from the account of a vulnerable 88-year-old man at the bank’s Church Road branch shortly before 10am on Tuesday 11 October without his consent.

“The loss was not discovered immediately.

“A 32-year-old woman from Hove has been arrested on suspicion of theft, fraud and possession of cannabis and bailed until New Year’s Day (Tuesday 1 January 2019) while inquiries continue.

”Anyone recognising him or knowing of his whereabouts, or the man himself, is asked to contact police by email at 101@sussex.pnn.police.uk or to phone 101, quoting serial 624 of 16/10.

“Alternatively, please contact Crimestoppers at www.crimestoppers-uk.org or call the independent charity anonymously on 0800 555111.”