Sussex University is offering a reward of up to £10,000 for the return of silverware which was stolen a fortnight ago. 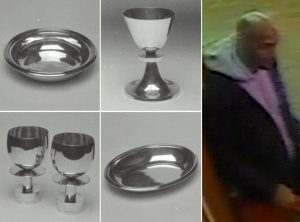 And Sussex Police issued a security camera picture of the suspect as well as photographs of some of the stolen items.

The force said: “The University of Sussex, at Falmer, is offering a reward of up to £10,000 in a bid to recover high-value silverware stolen from its sacristy.

“Police are renewing an appeal for anyone who saw anything suspicious or who may have other information concerning the theft, which happened between 1.50pm and 2.20pm on Friday 7 December.

“In particular they want to identify the man shown here, and any help from people recognising him would be greatly appreciated.

“The thief entered the sacristy in the two-storey circular Meeting House, adjoining Falmer House, and forced locked doors and containers to steal items with a combined value estimated at around £100,000.

“Among missing items are silver chalices, two of which were designed by noted sculptor Hans Coper, and several other religious artefacts.

“The thief is believed to have placed the items in a black rucksack before making off on foot towards the university’s Pevensey block. It is possible he then boarded a bus or got into another vehicle.

“The suspect is described as a man in his thirties, of mixed race, 6ft tall and of medium build, bald and with facial stubble.

“He was wearing a blue Puffa-style jacket over a grey hooded top, grey tracksuit bottoms and trainers with white markings on them.

“Police have alerted dealers to be aware of the theft and to report any suspicions if they are offered church silverware for sale. Some of the stolen items are pictured here, including the Hans Copen chalices.”

Detective Constable Rowan Carter said: “We would like to hear from anyone who recognises the man in the closed-circuit television (CCTV) image.

“This is a high-value burglary during which some unique items were stolen. Please get in touch if you have any information.