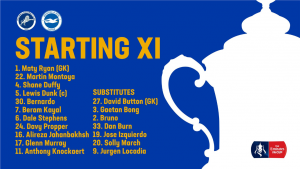 Albion take on Millwall in the FA Cup quarter finals at the New Den this afternoon (Sunday 17 March).

It is only the fourth time that the Seagulls have reached this stage of the competition in their 118-year history.

Albion fans will be hoping for only a second ever semi-final appearance.

Maty Ryan will start between the sticks, with Martin Montoya, Shane Duffy, skipper Lewis Dunk and Bernardo Fernandes da Silva Junior in front of him.

The match is Ryan’s first FA Cup appearance this season.

Beram Kayal, Dale Stephens and Davy Propper are in midfield.

And Glenn Murray is upfront, with Anthony Knockaert and Ali Jahanbakhsh alongside him.