More than 3,000 people have called on the council to start its revamp of the Madeira Terraces by restoring three arches close to the Concorde 2 night club.

They signed a petition that was presented to Brighton and Hove City Council today (Thursday 28 March) at the final full council meeting before the local elections on Thursday 2 May.

He said that the arches there were not typical as they had basements and were nearer existing businesses where current building work was “already having a disastrous effect on trading”.

Mr Wright said that the Concorde 2 was interested in renting out restored arches which could then provide income to fund the revamp of more arches.

He said: “The restoration cost for these three arches is not a true costing when restoring the remaining arches.

“I have spoken to businesses and they do not want the disruption and felt work would be better further along.”

Mr Wright said that one advantage of working with the music venue would include bringing the Madeira Lift into use all year round, helping with wheelchair access to the area.

He said: “We hope that the council will listen 100 per cent to our suggestions in this petition, supported by so many local people.

“We really think our idea will increase the footfall significantly to this area of Madeira Terraces and to the existing, nearby and new businesses that we need to attract.”

A crowdfunding campaign to restore the Madeira Terraces raised almost £500,000 from the public towards the millions needed to restore the 150 arches.

Mr Wright quoted a petitioner saying: “If the council wants to restore three arches of their choice then they can pay for them.” 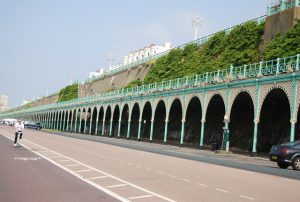 In response Councillor Alan Robins said: “We are asking officers to continue working with petitioners and encourage petitioners to do likewise.

“Our core aim remains the same – to secure a future for Madeira Terrace.”

She told councillors her preference was for restoration to start at the western end.

Councillor Tom Druitt said: “I am very disappointed to see the three chosen arches are not typical at all.

“It is a wasted opportunity. There is no point restoring arches when we have only three or four of that type and 150 others.”

To applause from the public gallery, he said that people needed to see their money being used on typical arches.

Councillors unanimously agreed to send the petition forward to the next Tourism, Development and Culture Committee meeting on Thursday 20 June.