When bogus builders targeted a pensioner in Patcham, neighbours rallied round to put right the damage.

The conmen knocked down her garden wall and tried to coerce her into drawing funds to pay to repair it.

But her bank – HSBC – spotted the fraud and called Sussex Police which led to the arrest of one of those alleged to have been behind the scam.

It was then that neighbours rallied round with, first, Ashley Elliott highlighting the scam on social media, prompting a huge response from the community.

Another neighbour, Steve Wright, spoke with fellow regulars in his local pub, the Ladies Mile, and some of them, who worked in the building trade, contacted Patcham ward councillor Lee Wares.

Within a few days they had set up “Patcham DIY SOS” and set about what some of them now lightheartedly call the Great Wall of Patcham.

Local firm Hacked Off Environmental Services went round and cleared away all the debris and disposed of it responsibly.

Foreman and Parker Building Supplies agreed to provide and deliver all the materials needed to rebuild the wall free of charge.

And a collection was started at the Ladies Mile to raise money that will be spent on improving home security for the resident.

Russell Tisbury and Paul and Gayle Newman, from the Ladies Mile, laid on bacon butties and refreshments to keep everybody going. 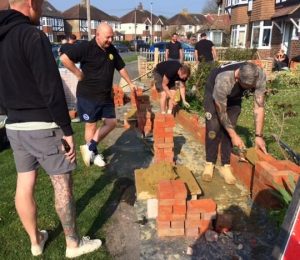 Councillor Wares said: “This started as something that made everybody very angry but quickly turned into a huge community response to do something about.

“Residents and local firms rallied round and offered everything for free. It was a remarkable response that just goes to show that the vast majority of people are full of goodwill and generosity.” 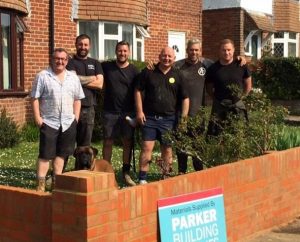 Councillor Wares added: “We have a terrific community spirit in Patcham and Hollingbury and there is always somebody helping out somebody else.

“We of course wish this situation had never happened but I can’t praise enough all those that helped and donated.”

Sussex Police said today: “A 37-year-old man from Addlestone, Surrey, was arrested on Monday 25 March on suspicion of fraud by false representation, theft of a van and driving with no insurance. He has been released under investigation.”