Brighton and Hove’s new litter cops have been told to start issuing fines after two weeks of trying to educate people about disposing of their rubbish legally. 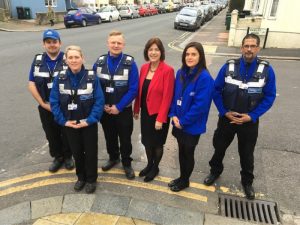 The team have given advice to about a thousand people and even more local firms before preparing to give out fines from yesterday (Monday 8 April).

Brighton and Hove City Council brought the service in-house after complaints about the former contractor 3GS being heavy-handed.

The council said yesterday: “Our new anti-litter team has now finished its two weeks of education on how to avoid being fined for dumping rubbish on the street or fly-tipping.

“From today, Monday 8 April, the officers will be issuing fines, known as fixed penalty notices (FPNs) – £75 for littering and £300 for fly-tipping.

“Over the last fortnight the officers have issued friendly warnings to around 1,500 businesses, big and small, to advise and remind them of their legal responsibilities on getting rid of their waste.

“They have also approached about 1,000 members of the public, including residents, tourists and students.

“But now it’s time to get serious with people who are causing a blight on our city by dropping their cigarette butts or litter or leaving unwanted items on the street, open land or beside a bin – even in the hope someone takes it away.

“Action will also be taken against smokers who think throwing a cigarette butt down a drain isn’t littering as it can add to clogging up our drainage system.

“The officers joined the council after the contract with controversial company 3GS come to an end recently.

“The 3GS jet black uniform – which some people say they found intimidating – has been replaced with a light blue jacket and black trousers.

“The officers will still wear camcorders for the public’s and their own protection and can use any footage if fines are disputed.”