UPDATE: The girls have been found safe, Sussex Police said on Monday 15 April.

Two teenage girls from Brighton and Hove have gone missing and police believe that they may be together. 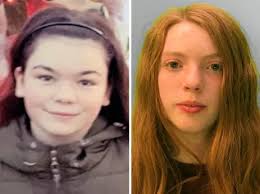 Sussex Police said: “Police are concerned for two missing Brighton and Hove teenagers believed to be together.

“Emily Muldoon-Love and Bebe Pettitt were last seen in the Brighton and Hove area on Wednesday (10 April).

“She was last seen wearing a maroon-coloured coat and black Nike trainers.

“Bebe, 14, is white, 5ft 5in, of slim build, with long ginger hair and it was unknown what she was last wearing.

“The pair could be using public transport, in particular trains, to travel.

“If anyone sees either Emily or Bebe or has any information on where they could be, please report online or call 101 quoting 819 of 10/04.”