Nightmare in progress – Brighton & Hove Albion are outmuscled, outplayed and freefalling out of the Premier League

Tony Bloom will have a restless night’s sleep and a decision to make. As an expert card player, does he now stick or twist?

Albion have run out of ideas. Chris Hughton, it appears, cannot motivate his squad any longer. Hughton has pulled the Albion from the depths of the Championship to the glory of the Premier League and will always be a legend in Brighton and Hove.

But his team haven’t scored a Premier League goal since Saturday 9 March and in the past three home matches have conceded eight and scored none, with just one shot on target.

Albion started brightly against Cardiff, with Solly March looking lively on the left.

But they were expected to easily dispatch the South Wales side, especially after the humiliation suffered against Bournemouth.

On 22 minutes Nathaniel Mendez-Laing curled a fantastic effort past Maty Ryan and memories of 1983 came flooding back.

Glenn Murray is another huge legend for Brighton and Hove Albion. Name a bus after him. Name a block of flats in his honour. But his legs have gone. The rare, very rare times either Dale Stephens or Davy Propper threaded a ball through to him, he was too slow react. He physically can’t get to it before the covering defender unless he can hit it first time and hope for the best or get little but of luck.

There was hope just before half time and for a while at the start of the second half. Five minutes later, however, Victor Camarasa floated in a free kick, Ryan stayed rooted and Sean Morrison doubled Cardiff’s advantage with a firm header.

The Seagulls seemed to be easily knocked off the ball by Cardiff. The Bluebirds were not physically a big team, but strong, well organised and as determined as Neil Warnock to get a result.

Albion had periods off possession and ran themselves into the ground but didn’t trouble Cardiff keeper Neil Etheridge to any great extent.

Andone and March appeared to link up well, Jose Izquierdo replaced Ali Jahanbakash, and Shane Duffy and Lewis Dunk alternatively went up front for set pieces. Duffy appeared to have a heated debate with the bench. Dale Stephens misplaced a number of passes, one of which trickled out of play with three Albion players standing within five yards of him.

Poor old Albion didn’t get anything out of referee Andre Marriner either.

Izquierdo swapped wings with March late on and presented Andone with a chance that skimmed over.

The team were booed off at the end. Cardiff hadn’t won a top flight away match by more than one goal since 1956.

Its not all over if Albion can manage four points, starting at Wolves away this Saturday (20 April) and Newcastle at home the week after (27 April). They might have a squeak.

But they need a goal, one off the backside like Kurt Nogan’s at the Goldstone in 1992 or Indigo Calderon’s off the face at the Amex in 2013, will do. Score and they might stay up but no further goals means almost certain relegation. 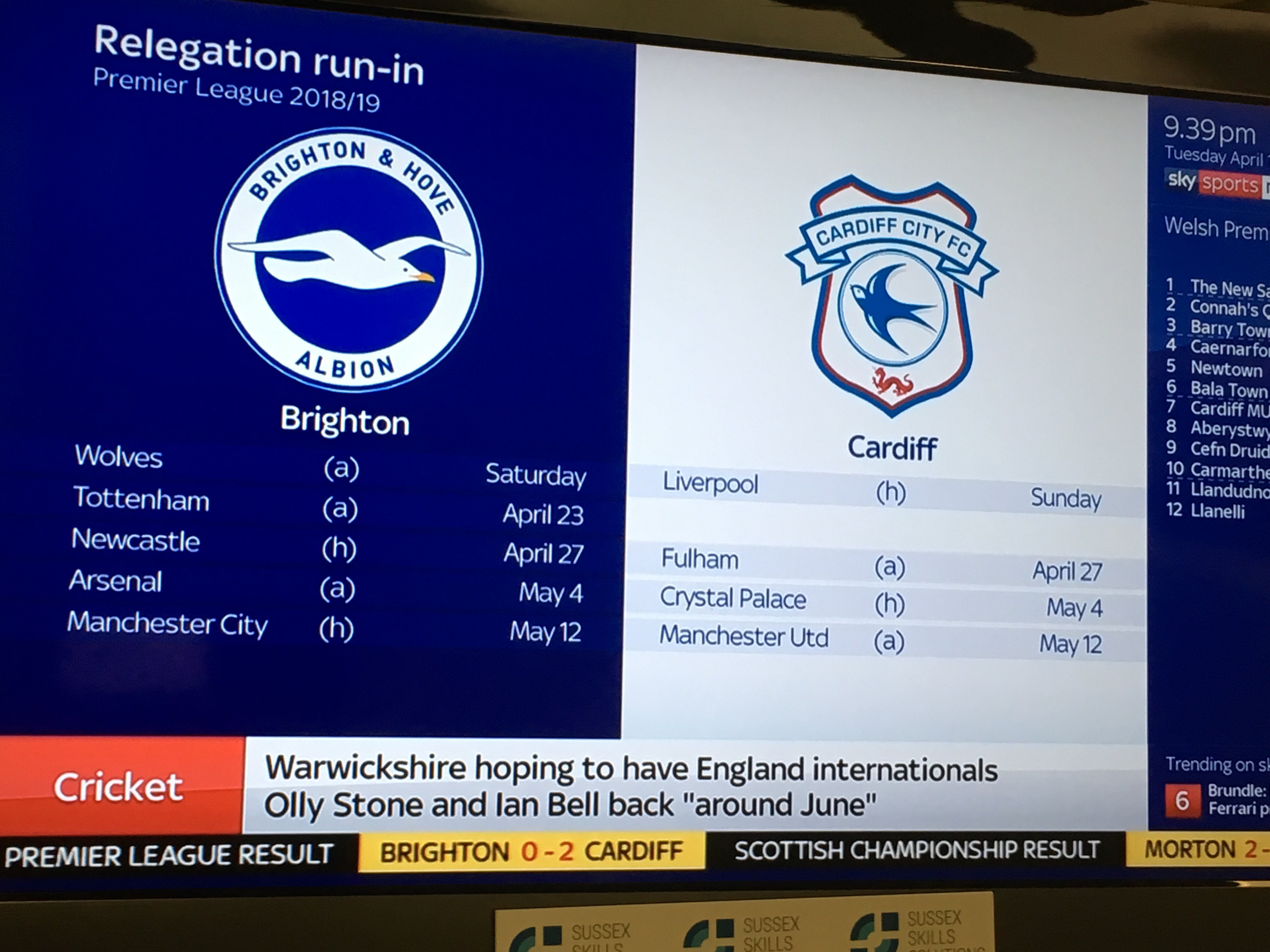