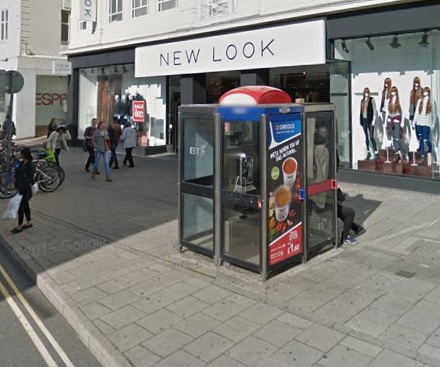 British Telecom plans to remove 26 payphones across Brighton and Hove and install communication hubs variously branded advertising by stealth, a surveillance network and a honeypot for drug deals.

BT started installing its InLink kiosks, which offer free wifi, calls and USB charging points, around London in 2017, with the intention of rolling out a thousand across the UK.

Since then, they have been criticised by privacy campaigners, who say BT is building “a military-grade street-level sensor network” which can “monitor almost every aspect of public urban life with scant regulatory oversight”.

Westminster Council then took legal action in a bid to prevent BT installing them, saying: “These things are not primarily phones. They are big advertising hoardings with a cursory phone attached.”

Other local authorities, including Bristol, City of London, Hackney Hammersmith, Islington, Kingston, Liverpool and Tower Hamlets, have echoed these concerns.

Westminster’s case was against the Planning Inspectorate approving an InLink application, and its success means these kiosks now need full planning permission.

And this month, the Evening Standard branded them a honeypot for drug dealers after it was revealed one gang made an estimated £1.28million worth of deals from a kiosk in Whitechapel. Similar problems have been reported in Camden, Islington and Manchester, and with similar kiosks in Nottingham.

In its application, BT says: “At no cost to taxpayers or users, the proposed InLink and associated payphone removals will improve the public realm by reducing clutter and providing everyone in the community with an unprecedented suite of essential urban tools.”

It goes on to detail pre-application advice given by planning officer Sven Rufus who, BT says, told them “Brighton and Hove Council are likely to support, in principle, any InLink sites which propose the conversion of relocation of an existing BT payphone as this will result in the removal of street furniture and thereby assist the council’s decluttering programme.”

It says that following the advice, it scaled down its plans from 25 new hubs to 14.

The phone boxes planned for removal and replacement with hubs are:

A total of 26 applications have been made, 13 to remove phone boxes and replace with hubs, and 13 to display adverts on the hubs. To find them, search for applicant: British Telecommunications PLC on the council’s advanced planning search page.

A BT spokesperson said: “Communities across the UK are welcoming and benefiting from the InLink from BT service. Most people now have a mobile phone and calls made from our public telephones have fallen by around 90 per cent in the past decade.

“BT is replacing more than 1,000 payphones in major cities across the UK, with these new digital hubs, as part of a joint venture with InLinkUK. Each InLink provides ultrafast, free public wifi, phone calls, mobile device charging and a tablet for access to city services, maps and directions.

“In Brighton, a popular tourist destination, we believe InLinks will also become an important information and connectivity point for people visiting the area who can find out about local services as well as benefit from the free wifi and free calls.

“InLinkUK and BT also work collaboratively with local councils to help support their plans to make city centres attractive places for people to visit, shop and work in. By evolving the payphone into new services people want to use and freeing up space on pavements, we’re supporting efforts to revolutionise city centres as typically one InLink unit replaces two payphones.”