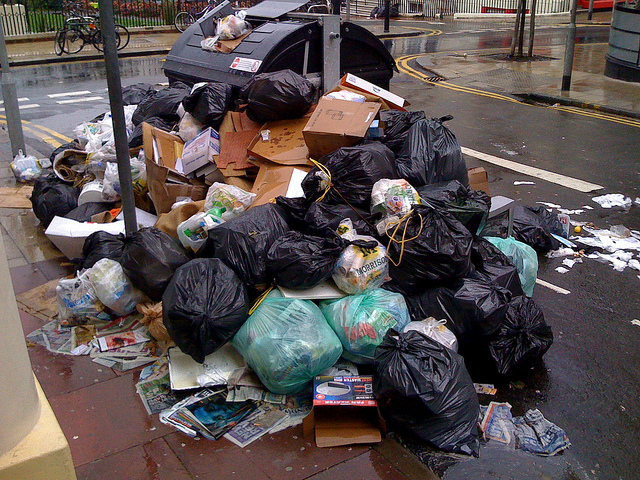 Rubbish piles up during the Brighton bin strike of November 2009. Image by by Dominic Alves on Flickr

Brighton binmen have voted overwhelmingly in favour of any strike action following a row between the GMB union and management over alleged “anti-trade union behaviour”.

The GMB has spoken out in recent weeks over concerns about how the senior management at Brighton and Hove City Council is dealing with staff and, in particular, union reps.

Several staff have been suspended at the Cityclean depot, including a GMB rep. The union said that the council had refused to allow staff to bring GMB rep Mark Turner into meetings and that management compiled a “secret dossier” on one rep – claims that the council denies.

The GMB said that it now intended to ballot for strike action unless chief executive Geoff Raw undertook “meaningful conciliations” through the arbitration service ACAS.

Mr Turner, the Sussex branch secretary, said: “GMB has listened to its members on this matter (with) their overwhelming support for their GMB reps who through supporting members in the workplace have it seems placed themselves on some anti-trade union management’s radar and are as a consequence suffering from being singled out in the workplace and subjected to stalking-like observations of their every move.

“This result shows that members are clear in saying that this has to stop and they, like their union, are looking towards those in charge of the service to respond to those wishes.

“If not, they’re unmistakably showing with this result that they are prepared to take affirmative action against the employer.

“After completing the legal requirements around industrial action and formal ballot process to do so then that’s what our members will do.

“We have throughout the consultative stage and will continue to do so through any formal stages of a ballot process offer the chance to resolve this matter to the council through the conciliation procedure if managed by ACAS but I’m not sure that’s what the chief executive wants as he has failed on several occasions to distance himself from the actions of some of his management team who have brought us to the edge of a dispute in the first place.”

GMB regional organiser Gary Palmer said: “It will be interesting to see, with the new council in place, if they instruct the chief executive, who of course works for the elected councillors and city, to get off the fence and deal with the issue to avoid any problems for the street cleansing, refuge and recycling service over the coming months or they allow him to carry on doing what he does best – nothing.

“The ball therefore is firmly in the chief executive’s court. He can now bring us to the table to discuss this calmly with ACAS involvement or go through a prolonged industrial action dispute to find ourselves back around the table with ACAS to conciliate several months down the road.

“What we can’t do is allow the current situation to go on. The support of oppressive treatment of GMB workplace reps and interfering with the legal rights of members and reps to choose who represents them appears to go to the very top of the paid service at the council – and that spells danger for working relationships going forward, possibly even within wider areas inside the city and other services, as GMB reps throughout the council consider putting in subject access requests to see if they have had similar information and opinions gathered about them.”

The council said: “We’re extremely disappointed at the result of the indicative ballot which we believe is unwarranted.

“There are no legitimate grounds for industrial action as accusations by the GMB of management trying to undermine the union or remove it from the depot are entirely untrue. We are still working with the GMB and its members on a daily basis and will continue to do so.

“With summer fast approaching, when the city is extremely busy with millions of tourists, a strike would benefit no one and only do damage to the city and our businesses and residents.

“There is no intention to remove any union reps or prevent them from raising issues or punish them for doing so.

“We also want to make clear that claims by the GMB that we hold ‘secret dossiers’ on employees is also an entirely false accusation. We have already reassured staff at the depot that we only retain factual information on employees, including address, emergency contacts, sickness absence, etc, which is necessary and what all sensible employers do.

“The only other information we keep on an individual is when someone has made a complaint against the council or has had a complaint made against them. Documentation such as emails and letters are kept as part of disciplinary processes which we must keep by law.

“We hold no secrets and any council employee can ask for their full records at any time.

“Since a new assistant director started just over six months ago we are undertaking a complete review of Cityclean to ensure we’re providing the best and safest service for our residents and customers.

“This has uncovered a number of very serious issues that have required urgent action and which are being dealt with. We are making great progress thanks to all the Cityclean staff.”