A former British tennis No 1 is hosting an open day today (Saturday 18 May) at a club that is trying to draw more people into the game. 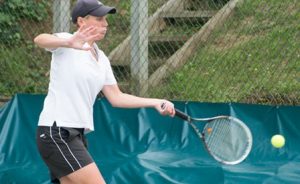 Julie Hobbs – born Julie Pullin – made nine appearances at Wimbledon before turning her talents to coaching.

Now, just over a month before this year’s tournament starts, she is hoping to attract more players to the game through an open day at Hove’s Pavilion and Avenue Tennis Club.

The club, in The Droveway, Hove, is helping to nurture some promising players but Mrs Hobbs, head coach, said that it had a much wider focus than just elite performance.

She said: “Not only does tennis have a host of proven health benefits, it’s also remarkably good fun, has a fantastic social element and is a lot less expensive than you may think.

“Pavilion and Avenue Tennis Club offers high-quality facilities and coaching for just over £5 a week (£298 for a full adult membership) as well as a range of ways to encourage activity, whether you’re a budding youngster or have never held a racket before.”

She said that anyone wanting to give it a try could sign up for a free coaching session, with slots on offer between 1pm and 5.30pm today.

Pavilion and Avenue is one of only two clubs in Sussex and one of only 50 in the country to receive the Lawn Tennis Association’s Local Player Development Centre status.

This recognises the level of coaching and the thriving youth system which is producing champions.

They include 17-year-old Sonay Kartal who recently won a key tournament in Lithuania, beating three players in the world’s top 80 to win the title.

Mrs Hobbs, who reached the second round of the Australian Open in 2000, said that the club ran several drop‐in social sessions each week, a competitive singles ladder, as well as adult, vets and junior teams.

It had a thriving clubhouse too, she said, where the emphasis was definitely on community rather than winning.

Her own professional career included eight singles and 25 doubles titles. She added: “This is a fun and busy time of year at the club with many different events and playing opportunities to take part in.”