A Brighton street has been closed while police – reportedly armed – and the emergency services deal with a siege. 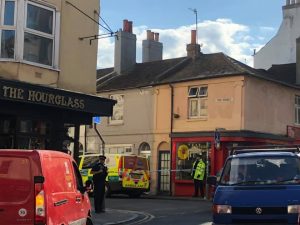 Police vehicles blocked off Tidy Street, from Trafalgar Street and Gloucester Street, in the North Laine area, as they dealt with the incident.

A neighbour said on Facebook: “One person at least has been seriously hurt.

“Riot police have entered building to secure the suspect.

“Possibly a squat, possibly started with a dispute, one member of the public knows the suspect and says, ‘Alex is not an animal but someone who needs help not (violence).’”

Other neighbours said that police would not tell them what was happening in their street but told them to stay indoors and keep their windows shut.

Between 7pm and 8pm Sussex Police said: “At about 4.10pm police were alerted to a domestic incident at a house in Tidy Street, Brighton.

“Both ends of the road were cordoned off at the time as a precaution.”

The force added that officers had been stood down, with one person arrested and in custody.