The sportswear giant has applied for planning permission to create a new glazed shopfront facing the piazza in between Topshop and WH Smiths.

And according to the plans included in the application submitted to Brighton and Hove City Council, the store will also extend back to include the unit currently occupied by Miss Selfridge.

A spokesman for JD Sports said: “JD Sports is relocating to a bigger space so that it can present the fullest range of products possible.”

Both JD Sports current unit and the ones earmarked in this application form part of the area which has been earmarked for Phase 3 of the ongoing revamp of the centre’s frontage.

The first phase of this, which saw the whole of the two-storey front of BHS and Topshop glazed, was completed in 2014.

Phase 2, the eastern side of the Western Road frontage from H&M to Urban Outfitters, then followed.

However, the revamp of Sole Trader’s shopfront of Sole Trader is the only part of the third and final phase to have been completed so far. 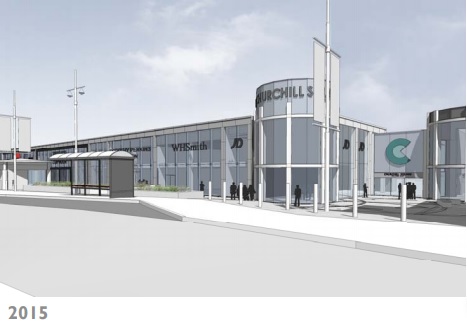 An application for the Sole Trader frontage submitted in 2012 application said: “This part of the Phase 3 works will be the first part of works that will mirror the proposed Phase 2 works at the east mall entrance, and on completion will frame the west mall entrance.

“During the course of the development of the application scheme design it became clear that there was a common objective between both [Churchill Square’s owners] Standard Life and the council that there was a need for a clear direction of how the Western Road frontage would change.

“However, given that the centre is a successful operating asset, the change would need the cooperation of existing tenants which meant that not all the works would be undertaken at one time.”

Both the existing JD Sports store and WH Smith are listed in that application as Future Phases.

It’s not known if and where the fashion stores would relocate to if the JD Sports plans are approved. Churchill Square declined to comment on the plans.

A spokeswoman for Arcadia, which owns Dorothy Perkins, Burton and Miss Selfridge, said there was no plan to close those stores.

Calzedonia, which also owns the Intimissimi lingerie store, did not respond to requests for comment.