THUMPER are the new IDLES 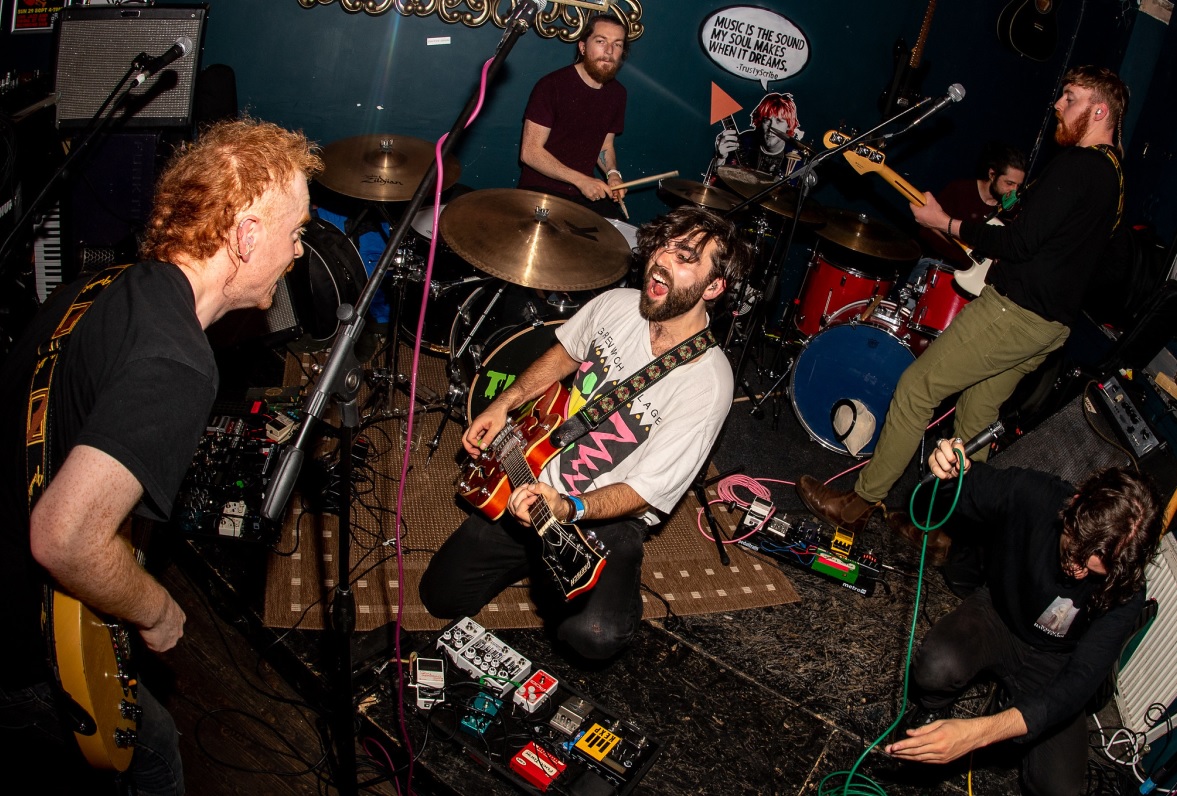 Our concert tonight at The Richmond Bar featured one of the very best music performances of the whole year…..and you know we’ve covered hundreds of them already!

As with more frequency in Brighton these days, there are inevitably concert clashes in town and it becomes a balancing act with juggling the review and photographic team around in order to cover as many acts as possible. This evening was one of those nights. We had a reviewer and photographer based at St. Mark’s Chapel, known as ‘The Spire’ in Kemp Town in order to cover the Spear Of Destiny concert (read that review HERE); as well as another reviewer (myself) and photographer who would whizz between the Green Door Store to catch Jim Jones & The Righteous Mind and Scare Taxi, before heading down the hill to The Richmond to catch Swoon, THUMPER and World News.

Jim Jones & The Righteous Mind and World News were performing at the same time, but thankfully my mate Dave (who was with us at the Green Door Store), left early in order to catch the whole of the World News set for us and thus give his thoughts on them. 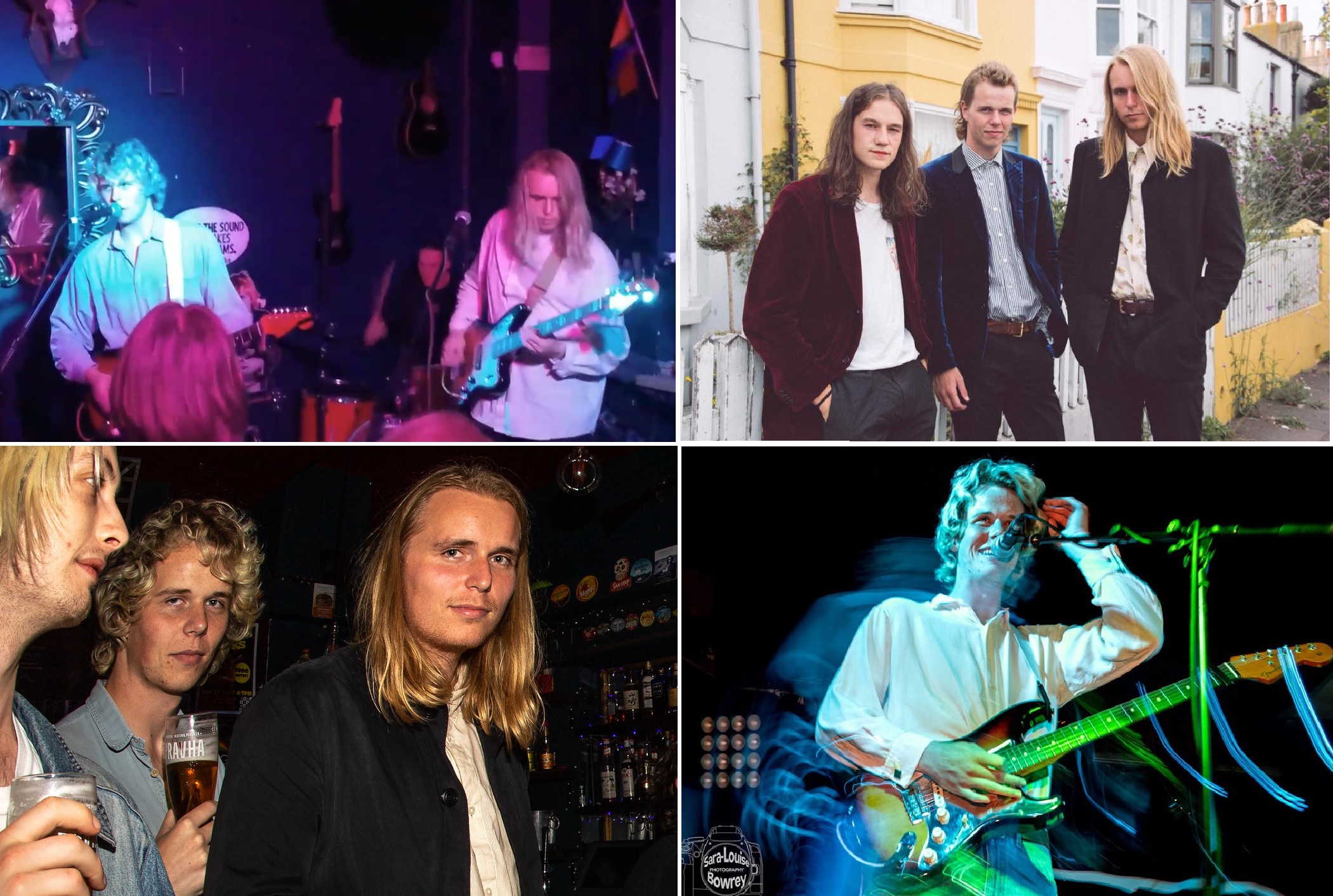 The evening at The Richmond was organised by Ban The Disco promoters and was kicked off by the Godlike towering figures of Alex Evans and his older brother Rory Evans and their mate Malte Henning, who collectively are known as World News, who we first managed to catch live in town a couple of weeks ago on 14th September.

The trio are based in Brighton and have only been going for around a year, but they have already performed at The Great Escape new music festival and I wholly expect them to turn up again for TGE2020. In July the guys released their debut single ‘Wake Up’ and you can find it on Spotify HERE.

My mate Dave reported that the place was packed for the eight song set from World News and that vocalist Alex Evans certainly reminded him of Bo Duke from ‘The Dukes Of Hazzard’ which initially aired from 1978 to 1985.

You can catch World News when they headline on Wednesday 16th October at The Western, 11 Cranbourne Street Brighton, where they will also have ELLiS*D and Winter Gardens on the bill – sounds like a fab night!

World News setlist:
‘Prog’
‘Tinman’
‘Lend Me Your Brain’
‘Job And Money’
‘I Don’t Like Your Perfume’
‘Give It Time’
‘Jammmmmm’
‘Wake Up’

Myself and our photographer now arrive just after the World News set. We have made it in time for the Thumper and Swoon performances. 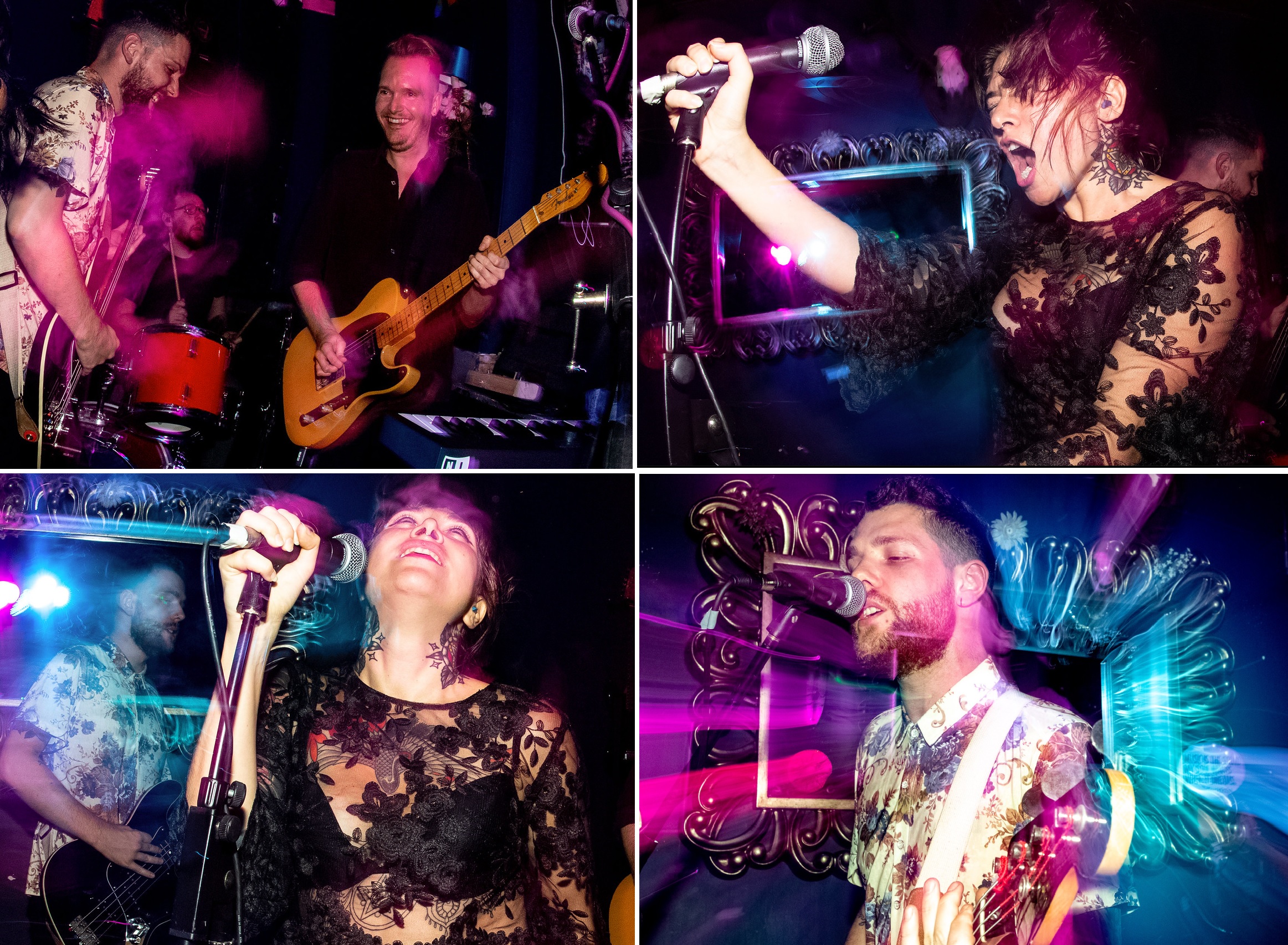 Tonight’s headliners Swoon are certainly no strangers to the Brighton & Hove News Music Team, as we have featured three of their previous Brighton concerts. Although tonight their charismatic Italian singer Alice has certainly changed since we last saw her. The bleached blond look has gone in favour of her ‘birth colour’ (as she informed me) and she is wearing glasses too, although no angel wings this time! But hey that powerful voice is still exactly the same! The amount of emotion and feeling in her performances is awe inspiring.

Brighton based Swoon formed two years ago and are a quartet made up of the aforementioned Alice who hails from Milan, along with Adam (keys/guitar), Chris (bass/guitar) and James (drums) and they state that they are a socio-political electro-punk band. They have already performed with the likes of The Blinders and Pussy Riot and their debut release ‘Teeth’ caught that attention of One Inch Badge with their ‘anything goes’ alt-pop music.

A trio of tunes from tonight’s ten track set, namely ‘Teeth’, ‘Wolf’ and ‘Fun Police’, can be found on their delicious ‘Fun Police’ 10” transparent yellow vinyl record which you can snap up from HERE for only £5 plus p+p.

However, the band know that my fave track of theirs is ‘Bubble’. The idea behind the song was Brighton itself. It refers to our all inclusive acceptance of everyone whether they be straight, gay or whatever race or creed – all are welcome here! So Alice being an outsider herself, who has been adopted by our wonderful city, has written the song as it’s as though Brighton is in it’s own ‘Bubble’ leading the way and the rest of the world will follow! “The B-U-B-B-L-E” – “That’s why I love our bubble!”. Enjoy the video HERE.
Having said all of that, on the night I actually enjoyed their energy filled final number which was the highlight of the set for me, namely the aforementioned ‘Fun Police’. They certainly let loose – enjoy the video HERE and enjoy them on Bandcamp HERE.

Unusually, I have left the report of the middle band to last. The reason I have deliberately done this is purely because this performance was one of the very best that I have witnessed all year!

When I review the concerts, I write a few notes onto my phone during the performances to remind myself when I get home. And on that note, some artists and people may believe that I’m not paying attention, in fact earlier this evening a portly gentlemen at the Green Door Store remarked to me that “there is a band on, you know.” But I clarified matters and then informed him that we were off to report on another one straight afterwards. Now the reason I mention this is because my notes (that are usually thorough) of the middle act, who are called THUMPER simply read “YES! YES! YES!” as I was extremely excited indeed! 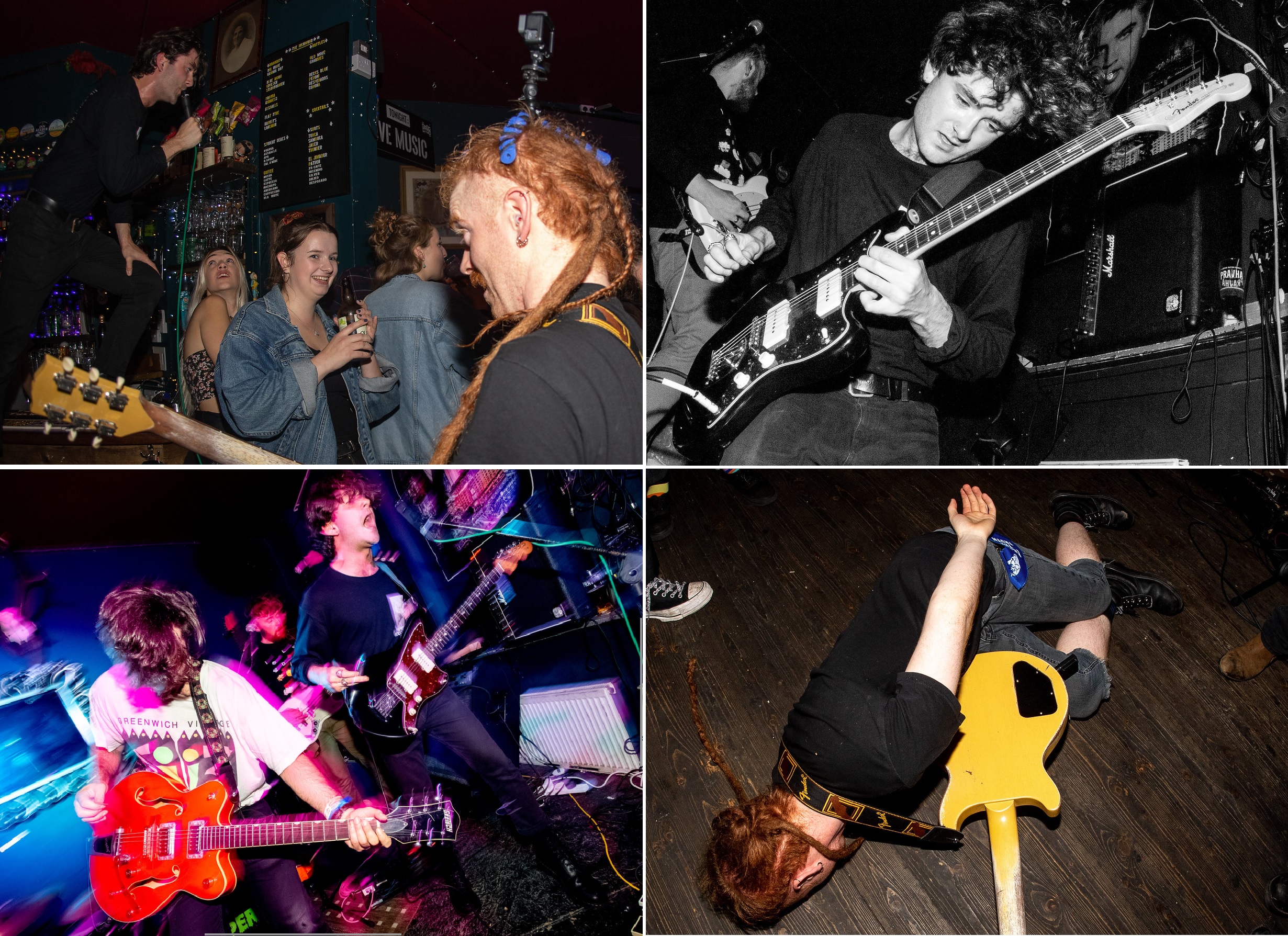 THUMPER only performed a mere handful of songs, but these were far from three-minute wonders! But we’re not talking prog rock, except we are going on record as stating that THUMPER have joined with IDLES, Fontaines DC and BlackWaters as the most exciting ‘new’ band out there at the moment! So if you are a fan of any of those bands, then you seriously need to check out this young sextet from Dublin.

THUMPER certainly have a name befitting their sound – meaning: “to strike against something heavily and noisily”. The reason for this is partly because they have Stevie D’Arcy and Shane Holly on the case. These lads are in fact both drummers who work in unison all the way through the set. It looks and sounds very impressive. Historically thinking in date order, you have the same wonderfulness as The Glitter Band, Adam & The Ants and Sigue Sigue Sputnik, all of which at their height had two drummers ‘thumping’ away!

THUMPER, who are on a seven-date UK tour, deliver bubblegum pop through a wall of sonic death and their reputation for raucous and frenzied live shows certainly kicks into play this evening. Blimey, where do I start? Their exercise in unpredictability saw frontman Oisin Leahy Furlong (vocals/guitar) heading off into the crowd and clambering over the chairs and ending up on the bar, with other guys lying on the floor and furniture, whilst still playing – it was epic! It’s no wonder THUMPER are consistently topping the “Ones To Watch” lists. The guys had a GoPro on the go tonight and I pray the film will see the light of day as it was all over the venue tonight. They even gave it to me and I dutifully did my part, which they thanked me at the end.

The other part of the wall of noise with the band sees no less than three guitars and a bass all in action at the same time. These come courtesy of the aforementioned lead singer and guitarist Oisin Leahy Furlong, as well as Alan Dooley (guitar/vocals), Alex Harvey (guitar/vocals) and Dav Campbell (bass).

The band have recently released a 5-track vinyl entitled ‘Out of Body Auto-Message’, and is available in all major record stores. It is the first studio record by the band and was produced by Dan Fox (Girl Band), and yes I grabbed a copy at the gig!

Steve Lamaq on BBC 6, Kerrang! Radio, and Irish national stations including Today FM and RTE 2FM have played tracks by this fab act and they have had features with Paste Mag US, Hotpress and Nialler9 – the future of rock and roll looks bright for these wide-eyed rockstars.

After their set, I was talking to the various band members and there was a general consensus that they are very keen to return to Brighton! Right then, which of you lovely promoters is going to get in first?

Find THUMPER on the web: 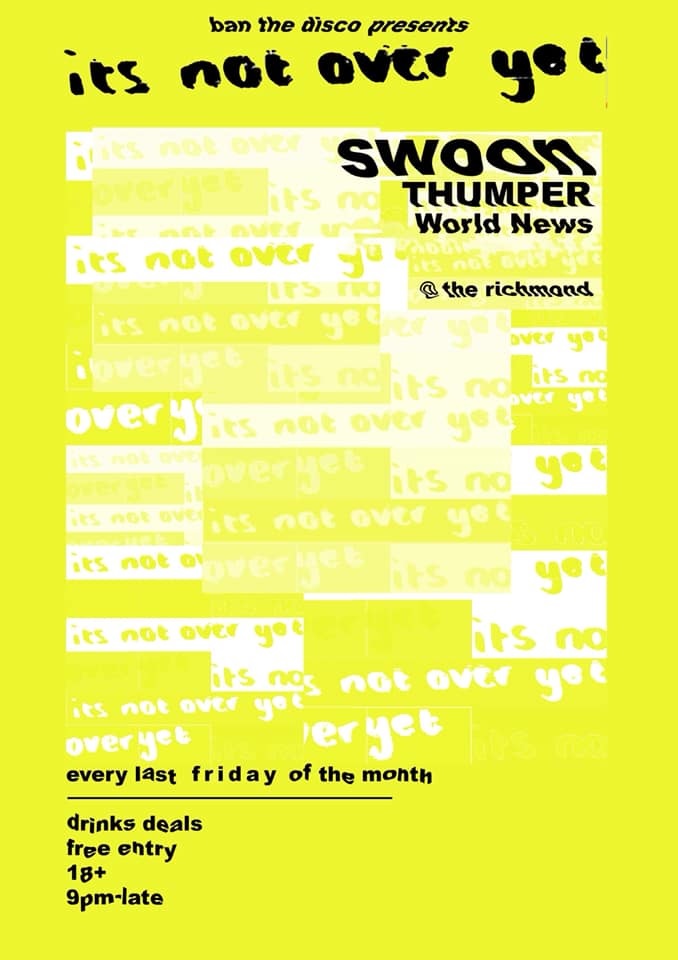