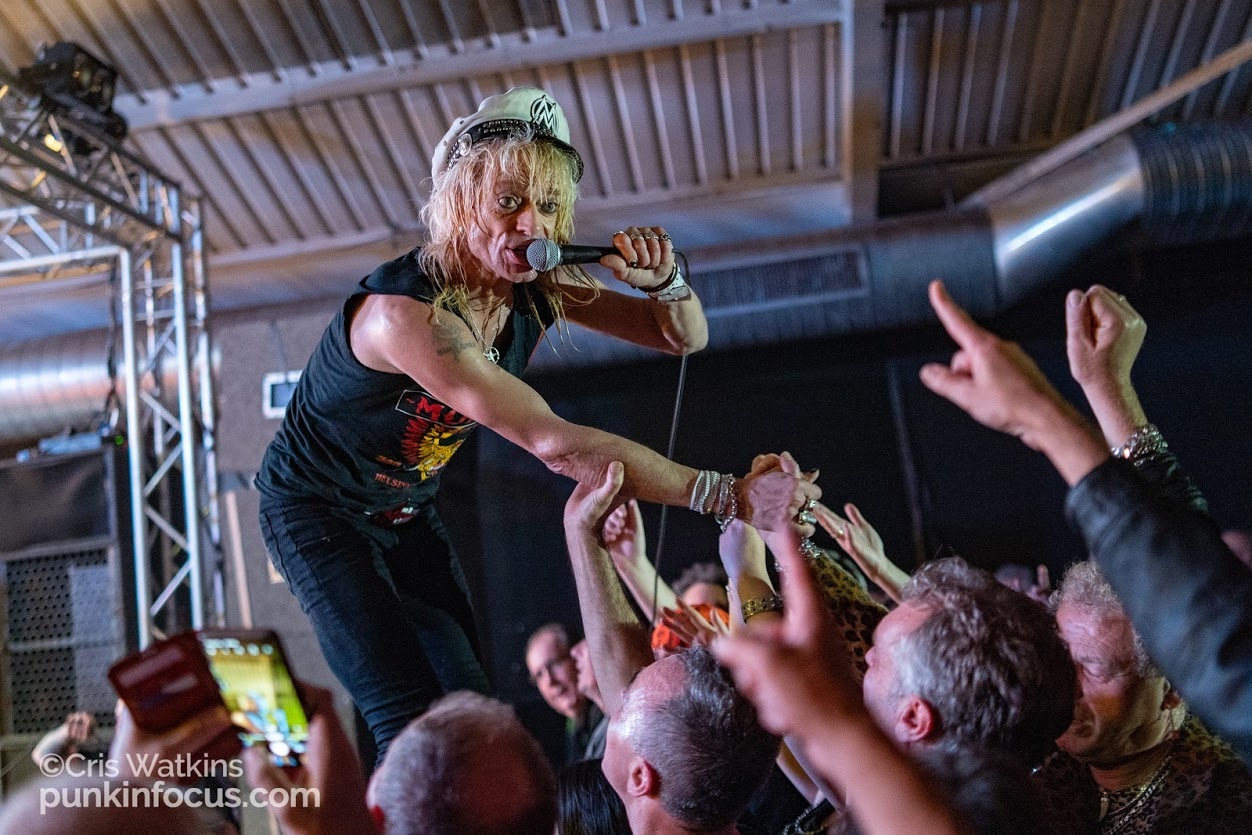 Michael Monroe‘s former band Hanoi Rocks, for me, single-handed kicked off the whole glam/rock scene in the mid-eighties and nineties. While influencing not only the sound but the look of a generation of glam rock bands, everyone from Guns ‘n’ Roses to the Manic Street Preachers. There was a bit of Hanoi in everyone at the time it seemed.

After the demise of the band in 1985, Michael Monroe hasn’t stood still, with outings as ‘Jerusalem Slim’ and the superb ‘Demolition 23′ who put out a single killer album of the same name back in 1994, that is certainly well worth checking out! Then came the Hanoi Rocks rebirth in the noughties which spawned another three albums before their ultimate demise.

Roll on the years and with at least 10 solo albums now to his name, Monroe is still proving he’s not fakin’ it, as this year’s ‘One Man Gang’ album is an absolute belter and tonight the supporting tour hits the Engine Rooms in Southampton as concert 16 of 22 date UK and Europe tour. Sadly there was no Brighton gig, so we had to secure an away fixture this time around! 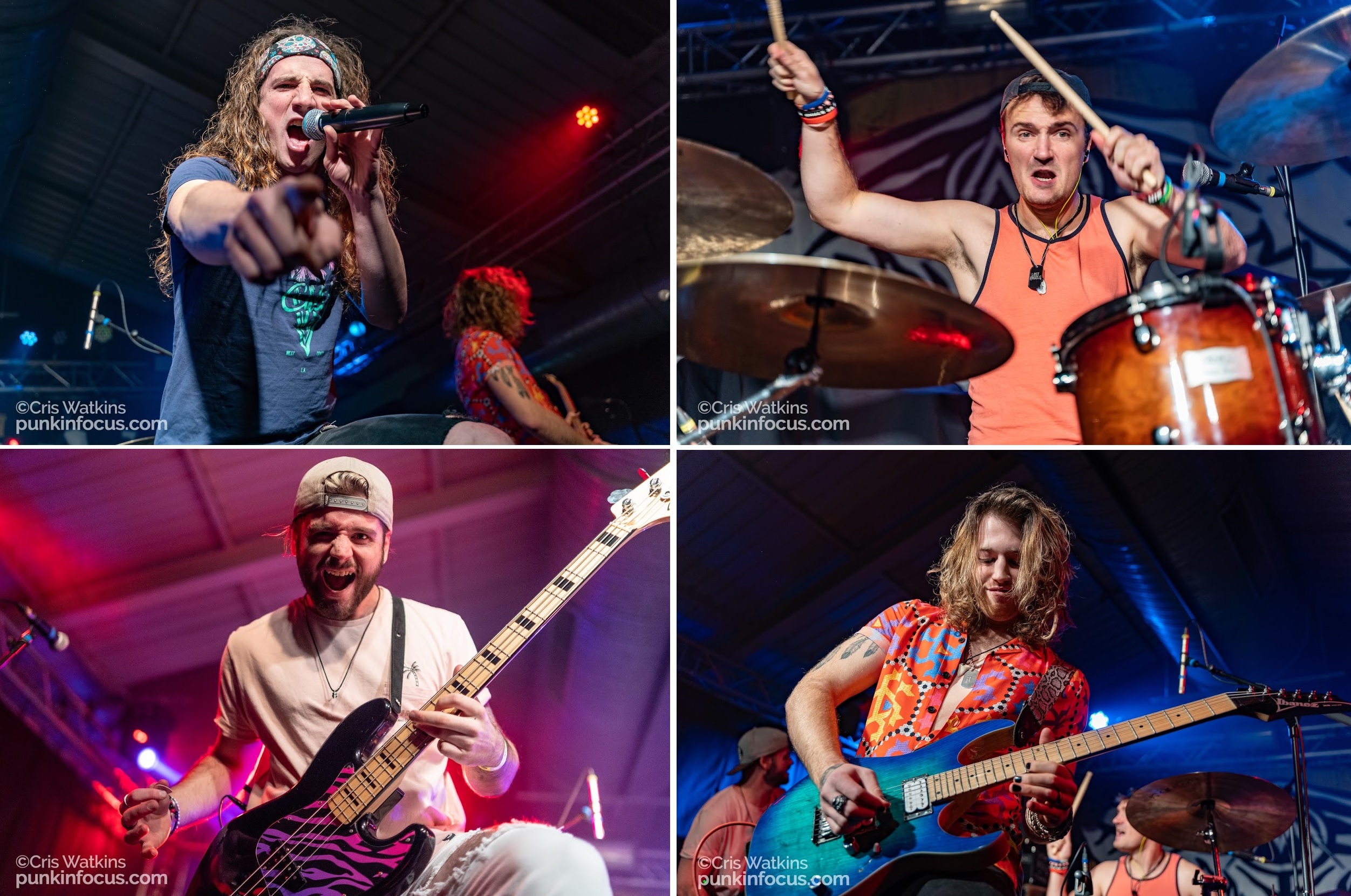 First up though this evening are ‘Saints of Sin‘, quartet who are based in Christchurch and wear their influences clearly on their sleeves. The members are Rui Brito (lead vocals), Marcus Sparxx Jenkins (guitar/backing vocals), Ashley Jenkins (bass/backing vocals) and Josh Rose (drums/backing vocals).

These guys are unashamedly pure 80’s/90’s hair metal reinvigorated for today’s youth. If you’re a fan of such artists as the Scorpions, Van Halen, Warrant, Winger et al, then you’re going to dig this band big time!

They have some killer anthems too like tonight’s opener ‘The Big Bad Wolf’ with its huge riffs and fat licks, as well as the rockin’ ‘Heart Attack’, which is another track that comes across perfectly live. We are also treated to ‘We’re On Fire, ‘Alive’ and the kicking ‘Nasty Love’. Favourite of the sadly short set for me though was the Bon Jovi tinged ’21 Shots’, which closed the set with a bang! Their website states “Big hooks, big riffs, big hair” and it couldn’t be more spot on!

Put them on your ones to watch list – find out more here www.saintsofsin.band 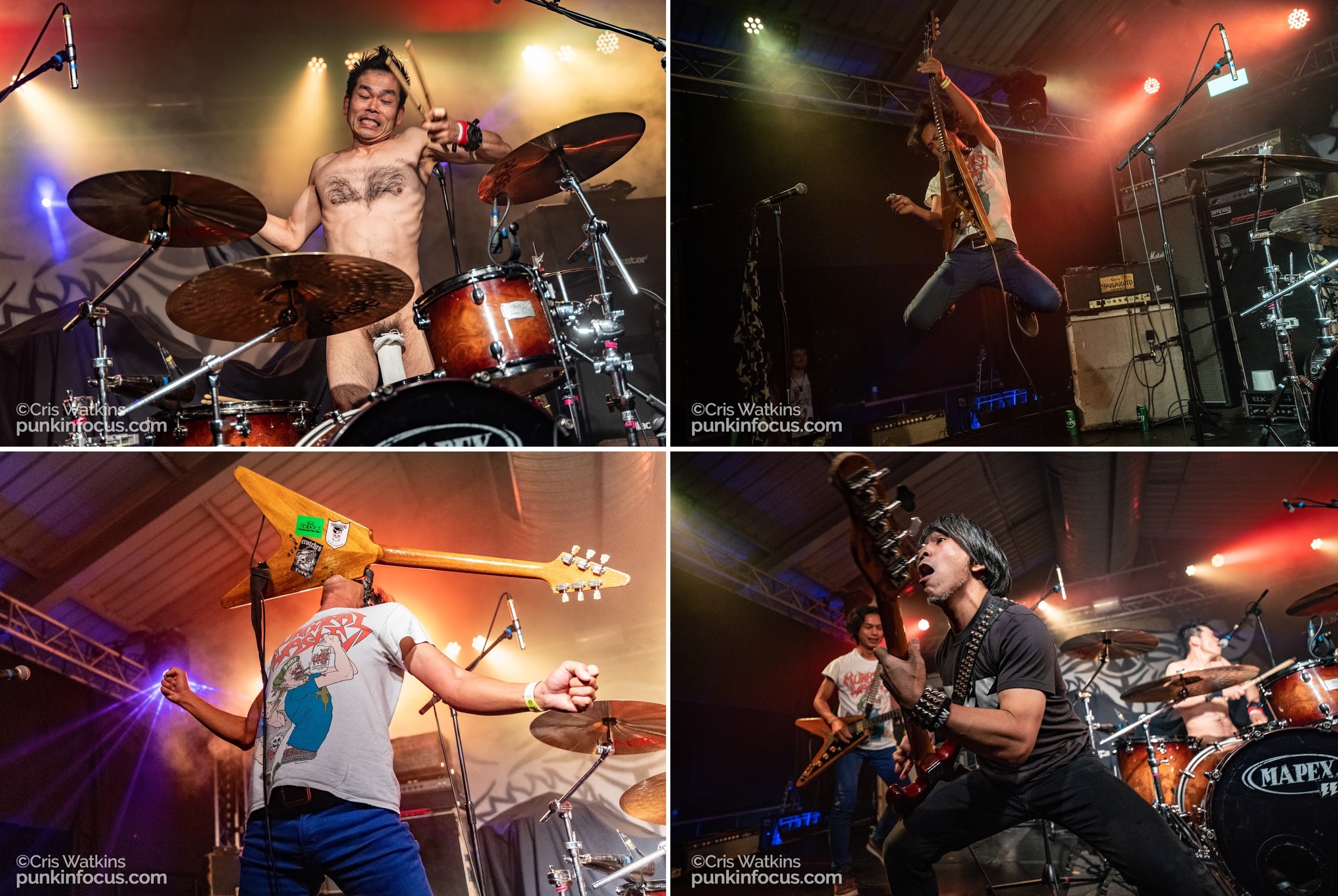 ‘Electric Eel Shock‘ is an Osaka based Japanese 3-piece, who perform stripped-down (more on that later!) garage-rock/metal and in the words of singer/guitarist Aki Morimoto “We love 80’s heavy metal!”

What we get in the next 30 minutes is an OTT show featuring three larger than life characters blessed with a love for what they do and they deliver in spades on all levels. It’s not easy to get a crowd going on a Sunday night, but you just can’t help getting dragged along with EES.

Opening with ‘Red Devil’ which is fast classic rock, and followed by the sing-a-long ‘Bastard’. Most of the songs belt out big classic stoner riffs, all delivered with a punk rock edge. There was some great guitar work from Aki, solid bass from Kazuto Maekawa and intense drumming from Tomoharu “Gian”, who incidentally plays with no less than four drumsticks, oh and errr is naked apart from a rather long sports sock covering his modesty! Okay so he did start the show sporting a classic Hanoi Rocks t-shirt, but that’s long gone by the second number.

We were also treated to ‘So Much 80’s’, ‘Vegas Night’, ‘R’n’R’ and finally a great trip through the very metal ‘Metal Man’, with Tomuharu now standing on his drum stool strumming his sock! EES are as much fun as you can handle live, you’ll leave with ringing ears and a huge smile!

Find out more at electriceelshock.com 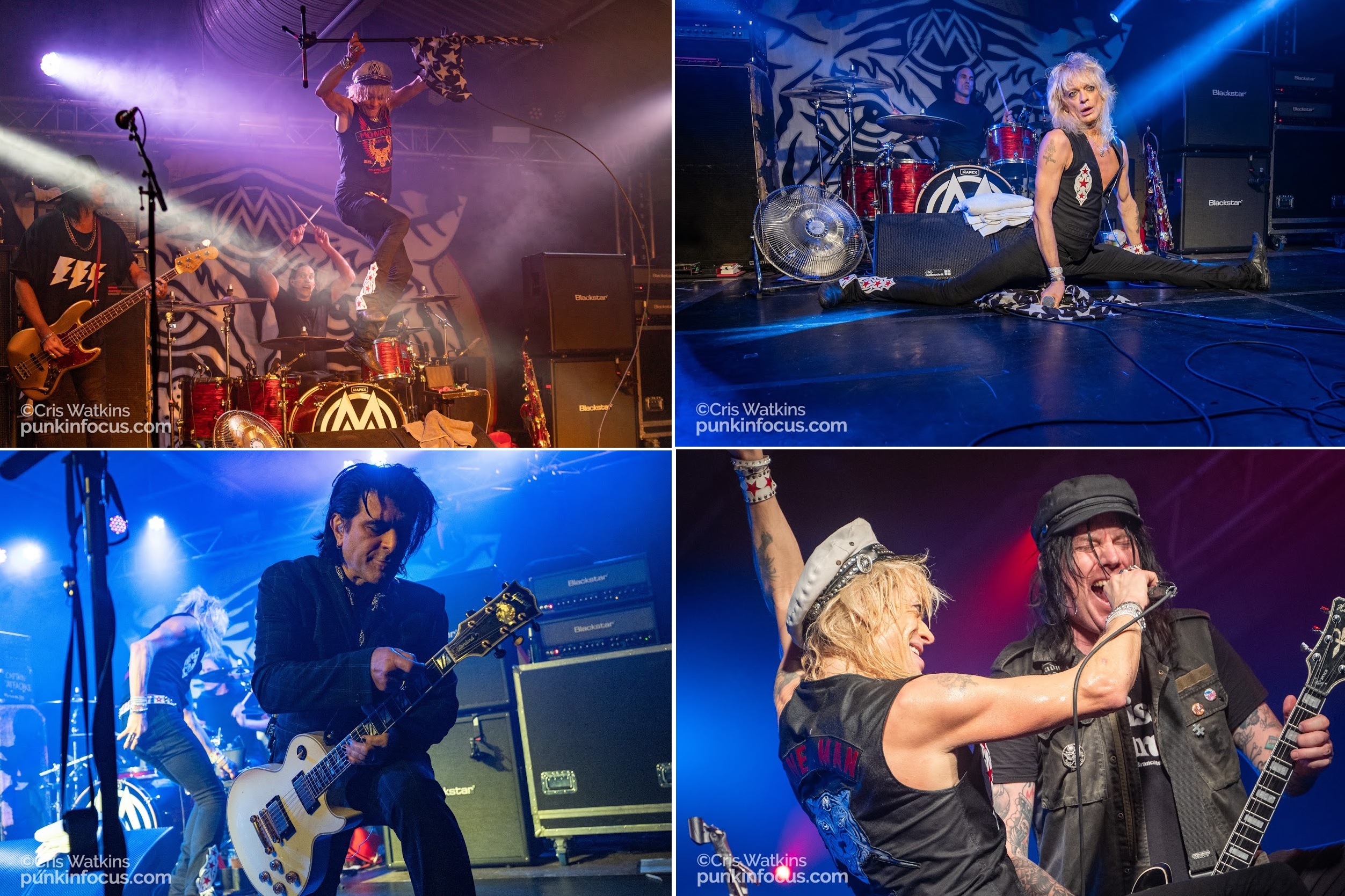 The band timings have been spot on tonight and bang on 9:30pm the intro tape kicks in before the arrival of Rich Jones, guitar (Amen, Black Halos and Ginger Wildheart Band), Steve Conte, guitar (New York Dolls, Steve Conte NYC and The Contes), Karl Rockfist, drums (Dregen) and of course Sami Yaffa, bass (Hanoi Rocks, Demolition 23, Mad Juana) swiftly followed by an extremely animated Michael Monroe. We are straight into ‘One Man Gang’ one of the first singles from the new album and what an opener it is, then bam! we’re into to another newbie the catchy as f**k ‘Last Train To Tokyo’ and it’s the perfect live track with a big fat chorus for the crowd to sing along.

We then get a further 3 tracks from the new platter, all which sit in perfectly with the live set notably ‘In The Tall Grass’ which has a real Hanoi feel to it. The rest of the night’s set sees Michael Monroe switch from vocal duties to Saxophone to blues harp more times than he changes hats and this man has a lot of hats! Every song is delivered with that trademark MM vocal style and backed tonight by one of the finest bands around with Jones and Conte delivering those big riffs and sweet solos backed up by the non-stop beat of Yaffa and Rockfist, and a big shout out to the sound in the Engine Rooms which is incredible tonight!

This band tonight absolutely nail it and we get scorching versions of Hanoi Rocks’ ‘Motorvatin’ and ‘Don’t You Ever Leave Me’, which still to this day can make a grown man shed a tear. A rousing version of ‘Up Around The Bend’ and the main set finishes with a blistering version of ‘Dead Jail Or Rock n Roll’ which sounds as fresh as is did 30 years ago.

The gang return for the encore and for me it’s a belter, with outings of Demolition 23’s ‘Nothin’s Alright’ and ‘Hammersmith Palais’, both huge barnstorming anthems and finally no Michael Monroe performance would be complete without closing the show to the Stooges classic ‘I Feel Alright’, which they’ve taken as one of their own and nurtured its growth to the rockin’ monster it is tonight.

Michael Monroe proves once again he’s still at the top of his game and age has not tamed him one damn bit, bringing an energy that singers half his age don’t even possess. Michael Monroe is 110% rock n roll and there is no substitute.

Monroe certainly had a ball and posted on social media “Hi! Thank you, Southampton, for last night! It was a blast!”.

Find out more at michaelmonroe.com