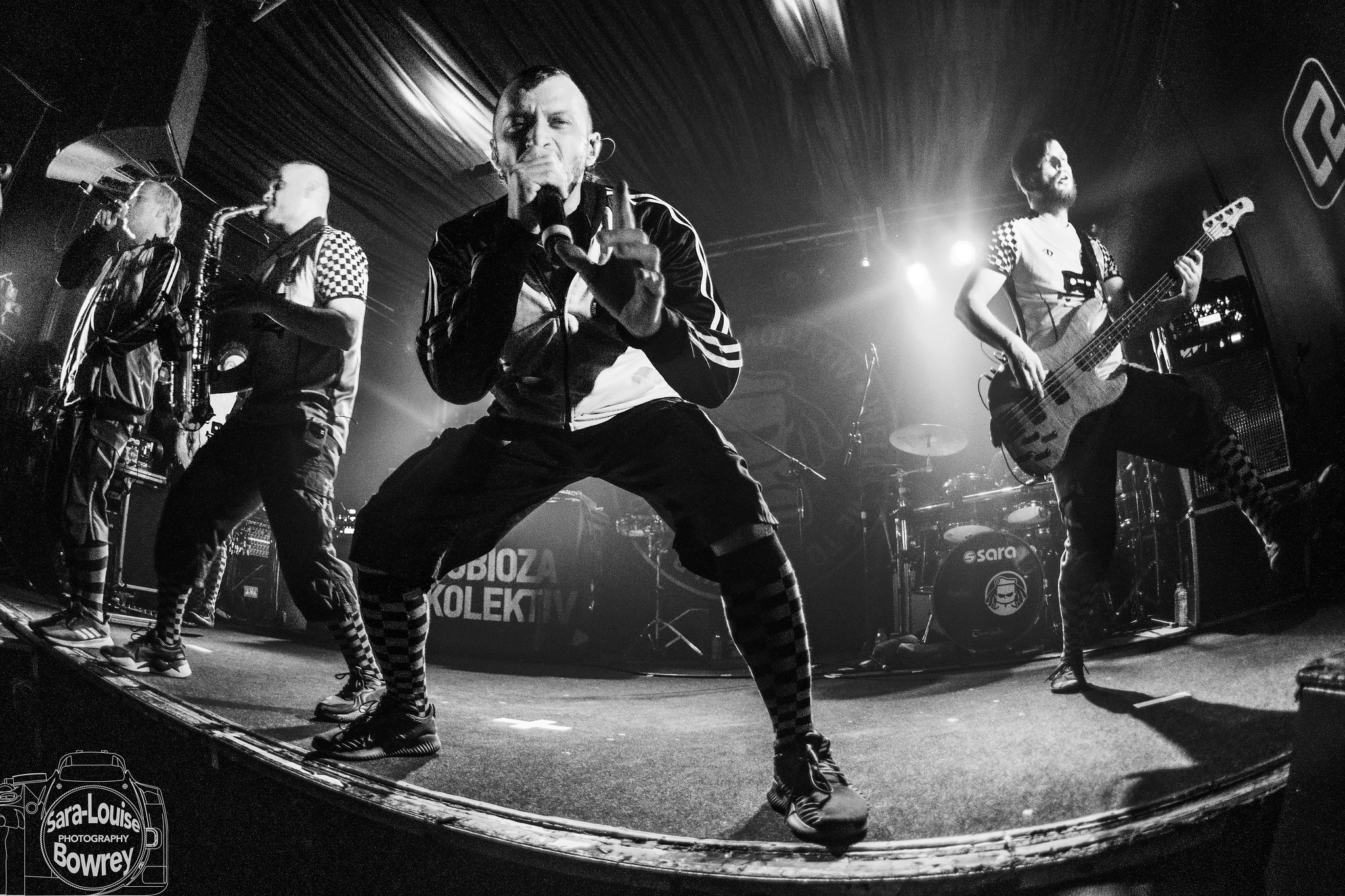 This evening’s Valentine’s Day was most certainly NOT going to be a massacre, as we were heading off to the popular Concorde 2 to witness an inspiring 1 hour 45 minute set from Dubioza Kolektiv.

I can hear you saying “Dubioza Who?” and I said exactly the same just a few hours before attending tonight’s gig. I hadn’t heard of them before either. They sounded very mysterious according to the ‘damsel in distress’ I was accompanying this evening. Being February 14th, I couldn’t let her go to a concert all by herself and so I did the gentlemanly thing and accompanied her for support. So to be honest, I only went along to keep her company………..however Dubioza Kolektiv most certainly delivered in a big way and we both ended up having a truly fab time!

The history of The ‘Kolektiv’ is akin to a fairy tale……Once upon a time (2003) in a dubious corner of the world and a land called Bosnia and Herzegovina, a group of friends decided to form a band. But this was no ordinary band, and they did not form under ordinary circumstances. True, along with local Balkan flavours, musical influences came from all over the world: ska, punk, reggae, electronic, hip-hop. Yet, there was no music industry, few concerts, and no space for cultural or political expression among the new crop of plugged in youth. In fact, the entire region was reeling from a deep moral and economic post-war stagnation. It was from this environment that Dubioza Kolektiv was born, and not quietly, but kicking and screaming, presenting no-go topics front and centre, and demanding to be heard. In doing so, they created a phenomenon. 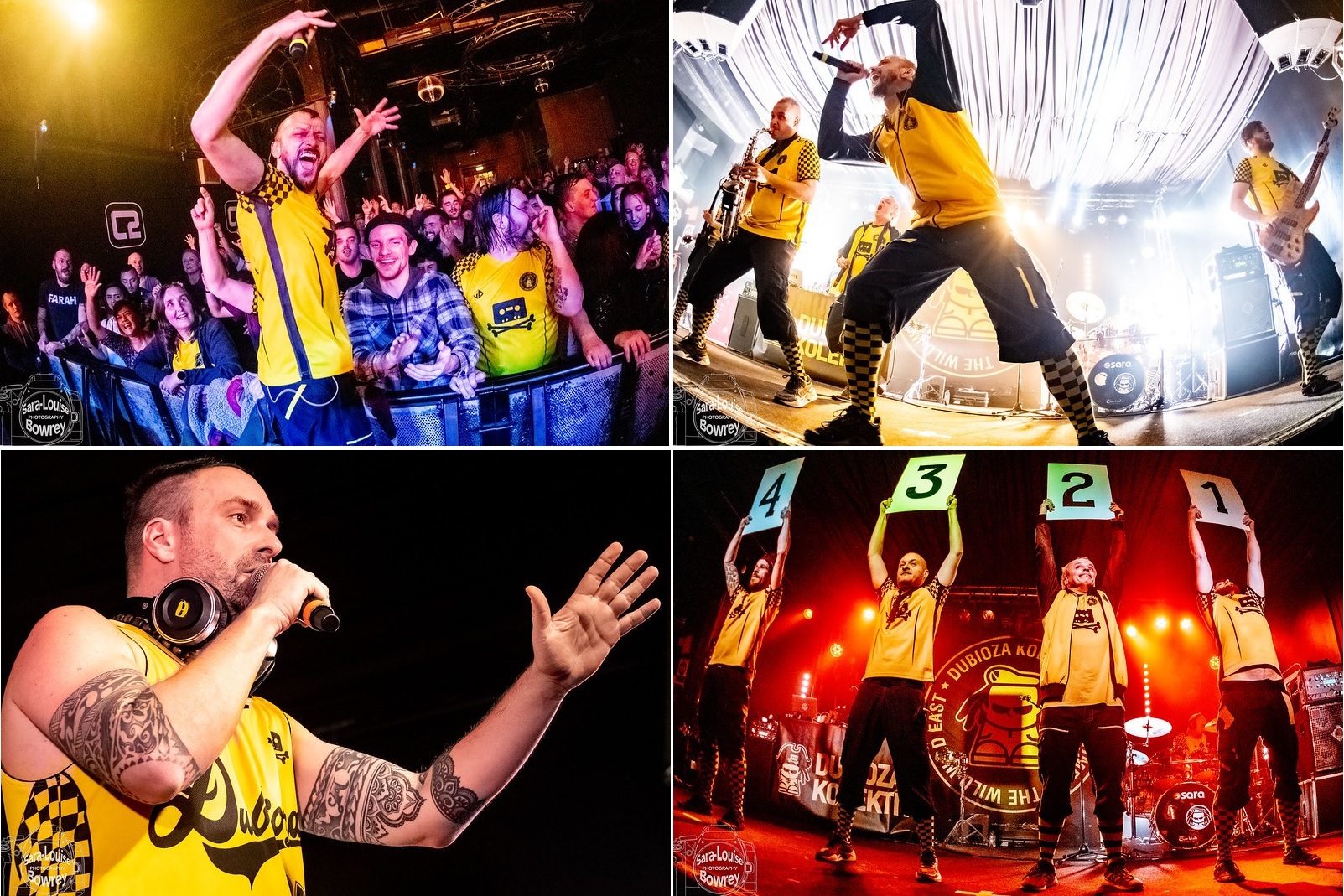 Over the years, Dubioza Kolektiv became the biggest band in the Balkans, with sold out shows in venues with 12,000+ capacity. They set the attendance record at ‘Exit Festival’s’ Fusion stage and played in front of half a million people at ‘Pol’and’Rock Festival’, where they received an award for the festival’s best international performance in 2018, voted by the audience. They are now most certainly a go-to band on the festivals circuit and my female friend had already had the pleasure of witnessing them live at ‘Camp Bestival’, ‘Boomtown’, ‘Bearded Theory’ and ‘Beautiful Days’ festival in Exeter (which is Brighton’s The Levellers own festival, who they have recorded a track with).

Tonight the bright yellow and black clad collective were returning to the Concorde 2, having performed here in 2018. They announced on taking to the stage “Welcome to the Balkan freak show”. The venue was nearly full and I was quite amazed as to how much support they have. Thankfully one of the guys decided to ask ‘the up for it’ audience where they came from. The result roughly speaking was a third from ‘The Balkans’ (which would have included Albania, Bosnia and Herzegovina, Bulgaria, Kosovo, Montenegro, North Macedonia and others); a third from Eastern Europe (presumed to include Romania, Slovakia, Poland, Hungary, Ukraine and the like); and a third from the UK. Therefore it’s not surprising that many in the UK have yet to still discover the delights from our Balkan friends! I can assure you that the band are BIG out East, as bears witness when you look at their Facebook page which currently sits just shy of half a million followers!!

Initially for the first few numbers this evening there were seven guys and then an eighth would come and go, so I suspect that he was something to do with the production of the band. Their intro tape explained a little about the band and then they shortly launched into ‘U.S.A’ which had the lyrics “I am from Bosnia, take me to the United States”. This was a rather catchy ditty and I can assure you many followed!

At the end of January they launched their brand new album ‘#fakenews’, which you can amazingly download for FREE from their website – find it HERE. 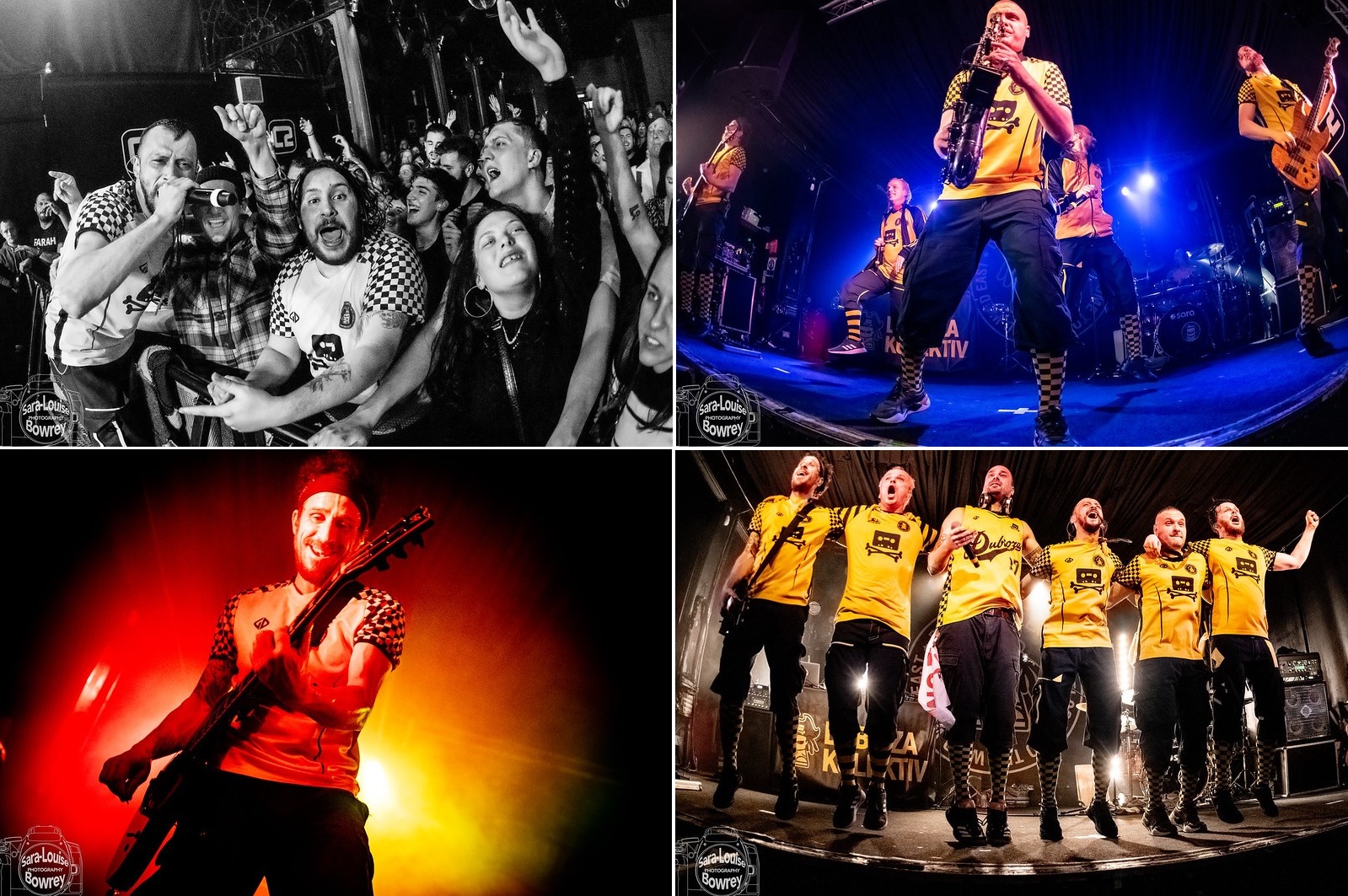 Tonight they obviously played several tracks from their new release, I reckon that there was half a dozen and the other tracks spanned from the past 9 years. For me it was impossible to distinguish between the new ones and the older ones, as they blended in rather nicely. The tunes came at us fast and furious and I’m certain that they did not totally stick to their proposed setlist, as there appeared to be a fair amount of improvisation. Despite this the band stayed together as a tight unit the whole evening and are clearly very good at what they do.

The uplifting music was in the main a wonderful modern take on ska, ragga, rap, acid and happy hardcore (like successful German trio Scooter) with added Bulkan flavourings. The nearest comparison off the top of my head, would be Gentleman’s Dub Club (who coincidentally I am seeing live tomorrow night at CHALK in Brighton). I would suggest that you only really get the true vibe of the band by witnessing them live in the flesh. Sure you can watch them on YouTube and enjoy their albums, but live is very much where it’s at with these lads! They put on a memorable show and folks come back. Come back time and time again it would seem.

The energy just simply flowed off of the raised stage and the punters, who I must say visually were a veritable melting pot, including heavily tattooed blue hair punks with studs, to Jethro Tull prog hippy types, to early twenties disco type girls. You most certainly couldn’t walk down the street and exclaim “Oh look, there’s a Dubioza Kolektiv fan”, unless of course they were donning one of their striking bright yellow and black t-shirts.

They performed their latest single ‘Take My Job Away’ which has an enjoyable video with it – watch it HERE. They were well choreographed through the night and kept your eyes firmly focused on the goings on. There were a couple of brief intermissions between the onslaught of tunes, when one of the guys would get it real and discuss topical things. It was clear that they wanted us back in Europe and they almost felt sorry for us. But away from the politics, they performed a cover of Bobby McFerrin’s classic ‘Don’t Worry Be Happy’ to cheer us up and indeed it was reprised during one of the encores. They taught us the Bosnian Tango and on their final number ‘Balkan Funk’, they heavily delved into Fatboy Slim’s legendary ‘Rockafeller Skank’.

They refused to stop and kept on going and gave us value for money and eventually overran (with last minute approval from the venue’s team) by 15 minutes! We love bands like that. Well that’s it, I’m converted! Hopefully they will return and I most certainly will be there! 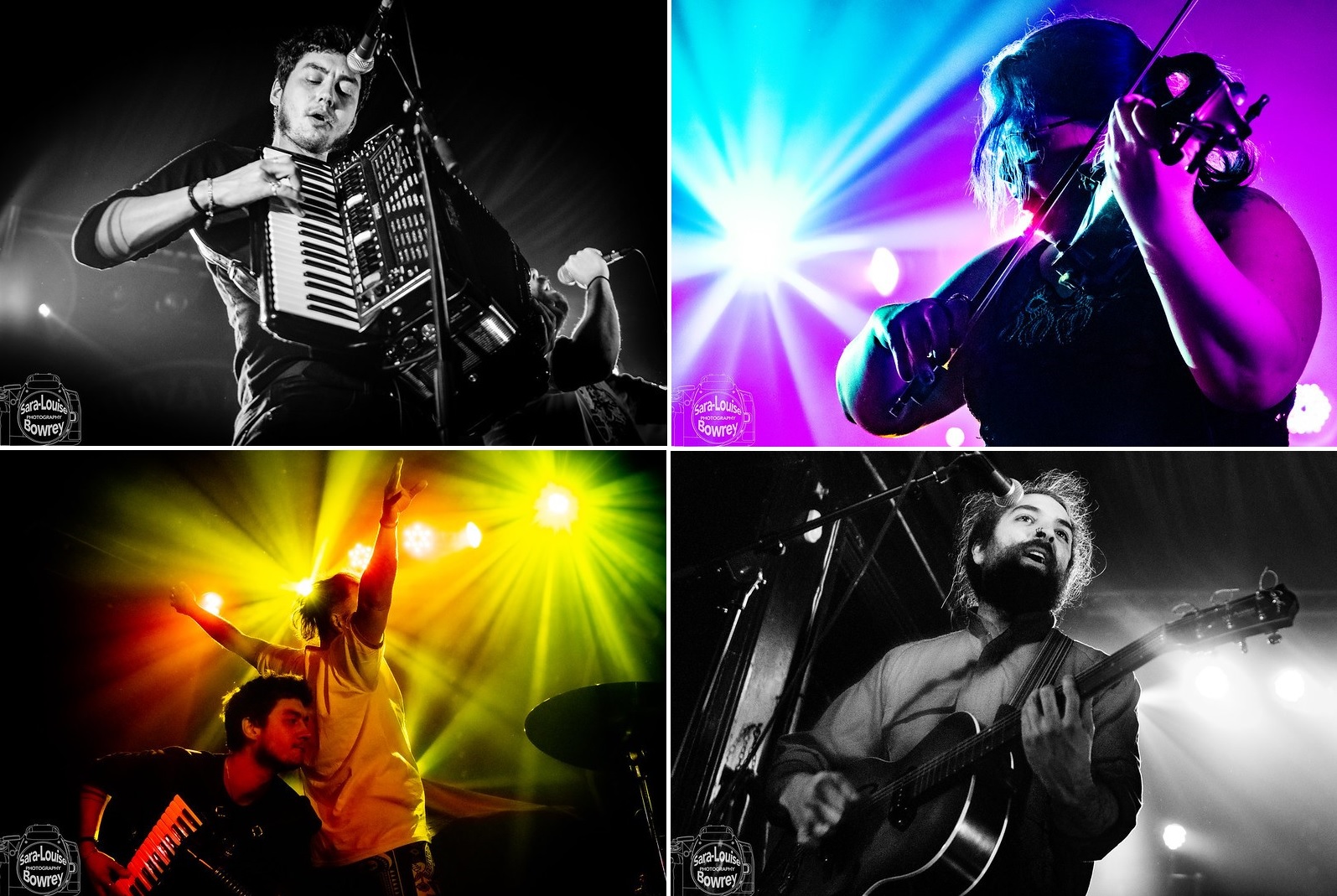 Support this evening came from Brighton based sextet Buffo’s Wake who according to themselves fall under the music genre of “Gypsy Punk, Horror Folk, Balkan Ska, Dark Cabaret” and who am I to argue with that!

To be honest I hadn’t heard of these guys either before either, despite them being based here in Brighton and having supported Dubioza Kolektiv last time around at the Concorde 2 on 1st November 2018.

On Halloween 2014, Buffo’s Wake released their debut album ‘Carniphobia’, which was eventually followed five years to the day later in 2019 by their current offering ‘Dybbuk’ – a collection of chaotic Klezmer-punk and Carnivalesque Balkan bangers, that has pushed their song-writing in new directions. This album was well and truly plugged by the band this evening as they bopped away on their guitar, accordion, violin, double bass and drums. They offered up the aforementioned styles, but I would add swinging ska and Oom-pah with attitude to that! They warmed the packed, but not quite sold out crowd up very nicely thank you!

No doubt Buffo’s Wake would be the perfect band to have at bar mitzvahs, Greek weddings, Russian wakes and out there parties! 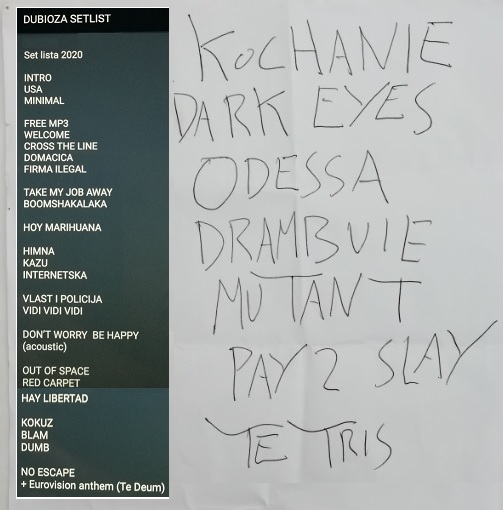