A government minister praised people and businesses in Brighton and Hove for turning green energy from something for ideological enthusiasts to a mainstream choice.

Climate Change Minister Gregory Barker spoke during a visit to Shoreham Harbour where he climbed on to the roof of Shed 10 to see the recently installed array of solar panels.

The 880 photovoltaic (PV) panels were put up by the Brighton Energy Co-operative which has started installing more panels on the roof of nearby Shed 3a for the port.

It is the second time that Mr Barker has taken a close up look at the energy co-op’s work, having previously inspected the roof of St George’s Church in Kemp Town. 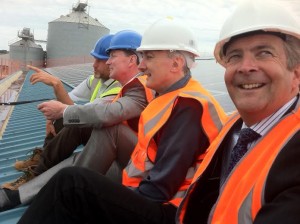 Mr Barker said that people and businesses in Brighton and Hove were “grabbing with both hands the opportunities presented by renewable energy”.

He said that the increasing take up of solar power meant that costs were coming down and it was becoming increasingly competitive.

And he welcomed the innovation taking place, giving people a greater choice of colours and designs and making solar power even more of a mainstream choice.

He said: “Since I became a minister in 2010, more than half a million homes have started to generate their own electricity using solar PV and new community energy projects are opening up the opportunity to join the solar revolution to engage in the community.”

Mr Barker, the MP for Bexhill and Battle, was joined on the roof of Shed 10 by his Conservative colleague Mike Weatherley, the MP for Hove.

The £240,000 scheme has been funded entirely by the public who have bought shares in Brighton Energy Co-op over the past three months, ranging in value from £300 to £20,000. The investors include Mr Weatherley.

The 200kW solar array will provide enough green electricity to power offices, a repair workshop and other port operations.

Brighton Energy Co-op has now raised more than £700,000 in total for its two solar energy schemes, making it the largest community-funded renewable energy initiative in the south east of England.

Mr Cottrell said: “Brighton Energy Co-op continues to grow and grow, providing clean green energy for the city and showing that there is a viable alternative to fracking.

“This latest scheme shows that people want to and can influence the future of energy supply in this city and will hopefully inspire other communities to do the same.”

Shoreham Port development director Peter Davies said: “This is another successful and exciting stage in the relationship between Shoreham Port and Brighton Energy Co-op as we both work with the community to bring renewable energy to the city.

“We now have more than 2,000 solar panels at the port which will help us to cut our energy bill and reduce our carbon footprint.”