Brighton sailor arrested on mission to save dophins

A Brighton sailor was arrested by the Danish Navy yesterday for attempting to stop the mass slaughter of hundreds of dolphins on the Faroe Islands. 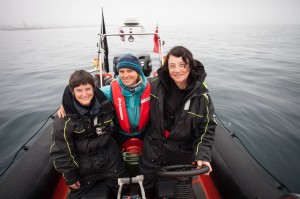 The crew of the Sea Shepherd

Captain Jessie Treverton is one of three volunteers manning the boat Spitfire which yesterday prevented dolphins from reaching the shore just outside the Faroese capital of Torshavn.

The navy chased, boarded and sezied Spitfire and arrested Jessie alongside Celine Le Diouron and Marion Selighini, both from France, and Danish police charged them with harassing the dolphins.

The trio are volunteering for the marine conservation charity Sea Shepherd as part of its Operation Grindstop 2014.

The charity says that though it is against Faroese law to interfere with the mass cetacean slaughter known as the “grindadrap” or “grind,” no grind had been called when Sea Shepherd prevented the dolphins from reaching shore.

Sea Shepherd Founder Captain Paul Watson responded, “Apparently in the Faroe Islands it is perfectly legal to kill a protected species, but it is illegal to push them back out to sea in order to keep them from harm’s way because that is considered ‘harassment.’

“So these three Sea Shepherd women can proudly say that they successfully ‘harassed’ the dolphins for the purpose of saving their lives.”

“The good news is, however, that a pod of hundreds of white-sided dolphins were successfully ‘harassed’ away from the vicious knives of the whalers.

Sea Shepherd currently has a lawyer involved. Police have now released Spitfire as well as the Sea Shepherd crewmembers, who have were held in interrogation last evening.

However, the volunteers face deportation from the Faroe Islands by Denmark, and if deported, would not be allowed to return to the Faroes for at least one year.