Brighton seafront needs about £100 million of work to make it safe and secure over the longer term, according to a report out this week. The final figure could be higher or lower subject to a variety of factors. The reality is that even the experts can only put forward a best guesstimate.

The hole in the road above the Fortune of War pub focused attention on the state of the seafront arches. But Brighton and Hove City Council had already set up a cross-party scrutiny panel to look at the problem and map out a way forward. The council had also already refurbished, strengthened and rebuilt some of the ageing arches close to the i360 site.

The arches make great business units for pubs, clubs, cafés and shops. Some that were recently rebuilt were previously disused or used only for storage. Now they generate rent for the council and business rates. Plus they hold up the busy A259 seafront road and the pavement alongside it.

Workmen in the Fortune of War pub removed some wood panelling in April, exposing the failings that led to part of the road above being closed for months. Other problems – down to ageing infrastructure – have prolonged the roadworks. The council said recently that things should return to normal early next month. 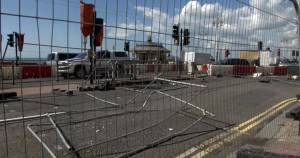 But some things shouldn’t go back to normal. One of those is the way that we care for what is one of our most valuable assets. The report out this week suggests that the seafront periodically becomes a project. After a while, attention shifts to the next problem that needs fixing.

Instead, the scrutiny panel report suggests that the seafront should be regarded as a priority supported by a permanent programme of maintenance and repair. And that programme should be led strategically by a single person. At the moment different sections of the council have responsibility for aspects of the seafront, divvied up according to budget. In future, the approach should be more joined up.

Evidence to the scrutiny panel – chaired by Councillor Gill Mitchell, deputy leader of the council’s opposition Labour group – underlined the importance of the seafront to Brighton. It’s a source of jobs, a magnet for tourists and a place of free recreation for millions of people each year.

So it makes the decisions about whether to repair, rebuild or replace structures like the arches vital not just for the economy but also for Brighton’s image at home and abroad. Other resorts have neglected their assets and paid a high price. But finding the funds to keep Brighton from fading is far from easy.

Seafront schemes from Brighton Marina to the King Alfred – including Black Rock, the i360 and Brighton Centre – could contribute something towards the cost. The council expects to make £1 million a year from the i360. Rents from revamped arches will also help. But much more is needed – and just as the council faces its own £100 million funding gap.

The revival of London Road could offer lessons. Good practice in Hastings, where the Hastings Pier Charity has been energising, could also provide ideas. Elements of the work could, for example, be part-funded by a direct appeal to the public – residents and visitors alike. This might be more sensible for, say, Madeira Terraces. It’s not a structure that holds up a road. It doesn’t have much prospect of qualifying for statutory funding although it does have heritage value.

The council has a track record of winning money from the European Union and from the government through the Coast to Capital Local Enterprise Partnership. But nothing can be taken for granted. Underneath the arches and all along the seafront we face something of a challenge. But it presents us with an opportunity too.

Our seafront is priceless – not just because it’s so hard to put a precise cost on the work that needs doing. We have the chance to strengthen one of the foundations of Brighton’s success and bequeath something precious and extraordinary to the generations to come.