Hundreds of people took part in a protest “Big Kiss-In” at a Brighton branch of Sainsbury’s this evening (Wednesday 15 October).

The protest was organised after a security guard told Sussex University student Annabelle Paige, 22, not to kiss her girlfriend saying that a customer had complained.

Miss Paige had given her girlfriend a peck on the cheek in the New England Street store on Saturday (11 October).

Sussex University Students’ Union communications officer Michael Segalov said: “Tonight was an incredible success and I’d like to thank everyone who came along and supported us, both in person and online. 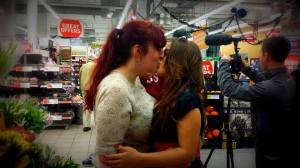 “It was important to all of us that we turned an unpleasant and negative situation into something positive and tonight we did that.

“A clear message has been sent to Sainsbury’s and our community. We will not accept homophobia and will take action when needed.

“I hope that Sainsbury’s responds to the requests we have all made and does the right thing, making it clear that as a company they will show commitment to the cause.”

The students’ union said: “Over the weekend a security guard at the store told a young woman that kissing her same gender partner was inappropriate.

“This followed a complaint from a shopper that it was ‘offensive’ and she ‘feared for her child’s safety’.

“The student was told they would be asked to leave the store if they continued.”

Sainsbury’s has apologised and said that the security guard was not employed directly by the store. The supermarket company also offered to donate £100 to charity.

So the #bigkissin was fantastic. Never seen so many people in a supermarket, and all spreading the love! pic.twitter.com/qr9ZsTYILZ