Child sexual exploitation – learning the lessons in Brighton and Hove

Alexis Jay’s recent report on sexual exploitation in Rotherham gave a “conservative estimate” of 1,400 children – mostly girls, some as young as 11 – who were threatened, tortured, raped and trafficked over a 16-year period while police and a council, described as “misogynistic” in culture, failed to protect them or charge perpetrators.

This was the latest in a series of scandals revealing that police and social services employees in areas across the country and over several decades did not just turn a blind eye to abuse but also blamed young victims and, in some cases, actively colluded with perpetrators.

Powerful and high-profile offenders like Jimmy Savile and Cyril Smith MP escaped justice, their victims silenced by agencies that should have assisted them.

So far, the focus of investigation has been Wales, parts of London, the Midlands and the north of England, where the abuse of many children appears to have been organised and particularly blatant. 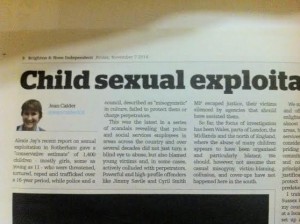 We should, however, not assume that casual misogyny, victim-blaming, collusion and cover-ups have not happened here in the south.

We may consider “our” politicians and officials to have been more enlightened than elsewhere.

In almost all of the known affected areas, however, councils and police services were run by people who considered themselves progressive, priding themselves on their commitment to liberty, diversity, and community cohesion.

I trained as a social worker in Sussex in the mid-1980s. As part of my course, I worked on placement at a local mental health facility and set up a small group for women. I wanted to invite a profoundly depressed and withdrawn middle-aged patient who was said to have had an incestuous “relationship” with her father.

The consultant psychiatrist in charge refused permission for me to approach her, describing her as a “disgusting little woman”.

That woman had endured sexual abuse by her father from early childhood through into adulthood.

Ironically, once the group began, it emerged that, unknown to their doctors, at least two of the participants had been abused in childhood. One had experienced four decades of mental illness and treatment but had never had the opportunity to disclose safely the fact that she had been raped for years by her wealthy and by then long-dead father.

After I qualified, I worked in a social services-run project for vulnerable 16 to 20-year-old girls and young women in Hove (later closed in an early round of budget cuts). Most had been sexually abused.

Many had not been believed when they first disclosed and had been sent back to live with their tormentors. Several had been abused while in care in foster placements.

I attended court with a young client who gave evidence against her stepfather, a sadistic bully who for 10 years had sexually abused and tortured her, along with her siblings, her mother, and pets. I was proud of her courage and composure as she gave evidence and deeply grateful to the police officers who had prepared the case against her abuser.

After the visibly sickened jury decided the man’s guilt, a police inspector who happened to be in court, remarked with a contemptuous curl of his lip: “Well, you can see from the look of her she’s no innocent.”

He had never met her or her family. Neither had the psychiatrist who, ignoring the sadism of the abuser, told a case conference: “The real pathology here is the mother’s.”

Around the same time, I met a young girl who alleged long-term sadistic abuse by a local professional. In common with many abuse victims, she had mental health problems.

The police in that case failed to investigate, though she had supplied detailed information to corroborate her allegations.

A simple search of the alleged perpetrator’s home could have supported her claims but it did not take place. Instead, the police delayed for weeks, then wrote to the man saying they would be visiting to discuss her complaint.

I remember pleading with the police not to forewarn him but they did. I was never sure whether a search took place. What is certain is that, if the evidence she described existed, he had weeks to remove it.

I spoke to her psychiatrist (neither of those referred to above) expressing frustration about professional failure to support young people who disclosed abuse. He said he thought the age of consent should be reduced to 11.

Are the TV news channels incapable of finding any female survivors of historic child abuse? Important, given majority of victims are girls.

In the 1990s, I learned of a boy in his early teens who was in care but regularly visiting and possibly living with a known paedophile, apparently with the knowledge of social services. I had never met the boy but passed the information to the police – only to be told that they had no plans to intervene because “at least we know where he is”.

The truth is that from the 1980s until the present, in defiance of the law, many professionals have treated 13 or 14 and even puberty as the de facto age of consent.

Though the new women’s movement of the 1970s and 1980s raised awareness of domestic and sexual violence, including child sexual abuse – and many principled professionals developed effective ways of supporting young victims – there remained huge resistance to this work, politically and in the media.

It was challenging, it was costly, and the number of victims and perpetrators involved potentially overwhelming.

It was far easier (and, in the short term, cheaper) to treat teenagers as if they were either liars or capable of consent – and to support them in apparent lifestyle choices, even when enmeshed in abusive “relationships” with older violent men.

It was gentler on the liberal palate to provide contraceptive advice, end unwanted pregnancies, “support” immature mothers to keep babies they were ill-equipped to care for or to provide advice about “safe sex” to abused boys than to take on powerful perpetrators and the professional establishment, challenging years of abuse. 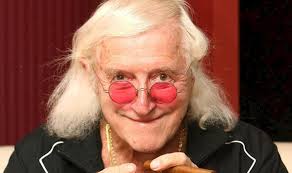 Around the late 1980s, I first learned that teenage girls were arriving at Gatwick Airport, being taken into care in West Sussex, and then going “missing”, probably trafficked into prostitution.

Despite the best efforts of a few individual police officers, there was little if any real investigation and no political concern.

There were also persistent rumours of child prostitution in Brighton, especially around the seafront, but I am not aware these were properly investigated.

Among local police and social workers, there was talk of serial abuse by politicians, such as Cyril Smith (then very much alive) – albeit elsewhere in the country – and of cover-ups at the highest level.

But people who asked questions (and I was one) were threatened with legal action.

Decades on and many scandals later, the government has committed itself to a public investigation of child sexual exploitation.

It would be a tragedy if that long-overdue inquiry were to focus only on those cities with already-identified problems. 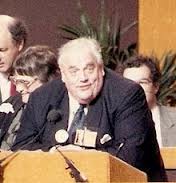 The government’s inquiry provides an opportunity for any UK victim of current or historic abuse to report (or re-report) their experience – and, it is hoped, achieve justice, or at least some degree of closure.

It also offers current or former public servants, such as police and social workers, as well as elected representatives, a chance to report abuse and inadequate practice in the institutions with which they have worked – information which may, in some cases, have troubled and haunted them.

Here in Sussex, we should challenge Katy Bourne, the Police and Crime Commissioner, Giles York, the Chief Constable, as well as local authority chief executives, MPs and councillors to do two things.

Firstly, to actively encourage people with information about current or historic abuse to come forward – whether they be survivors, professionals or others with concerns about past decisions.

Secondly, to reassure the public that Sussex Police and its partners will not allow budgetary constraints or political considerations, such as party loyalties, community cohesion or commitment to diversity, to hinder the protection of children and young people and the investigation of criminal behaviour.

This inquiry provides a unique opportunity to deliver justice to victims and improve protections for young people.

Survivors of abuse have over the years too often been betrayed. This time we must not let them down.

This article first appeared in the Brighton and Hove Independent.