The Albion could have gone in front early in the first half , however Bent’s close range header was saved by the outstretched foot of Fulham keeper Marcus Bettlinelli

Albion had the better of the early exchanges with Bruno seeking out Bent early on and Kazenga Lua Lua also getting in some promising positions amd providing some decent crosses .

One bizarre moment near the end of the first half saw Gary Gardener , Elloitt Bennett and Bruno poised over a free kick , with Sami Hyypia bellowing instructions and gesticulating on the touch line. The players looked confused and Gardener simply blasted promisingly positioned free kick in to the Fulham wall.

The match came to life in the 52 minute, Bent latching on to a angled pass from Adrain Colunga, the multi million pound forward slide the ball home from a tight angle with a sizeable deflection from Shaun Hutchinson. After scoring Bent cupped his ears towards the Fulham fans which caught the attention of both referee Simon Hooper and his assistants . However, Bent escaped a booking .

Following their goal however, Albion looked devoid of energy, idea and inspiration and Fulham’s almost inevitable equaliser came courtesy of Hugo Rodallega . The Fulham forward was afforded far too much space in the Albion box and fired high into the net to restore parity just after the hour .

Despite captain for the day Lewis Dunk putting in a superb shift Albion looked nervy at the back. Aaron Hughes also looked comfortable with the ball at his feet to set up an attacking play but less assured when defending on the deck.

Albion tried to go again and get Bent involved.

Colunga did his best to weave his way into good supporting positions . You cannot help notice how much the diminutive Spaniard resembles ex Albion midfielder Dean Cox.

Albion were wasting free kicks, Gary Gardener and Bruno two of the culprits .

How Albion could do with a player like Scott Parker. At Championship level the Fulham captain is superb, almost anonymous , but able to anticipate and tidy up any loose ball with supreme effectiveness .

Fulham’s winner was fortuitous , Ruiz played a hopeful punt into the area and the ball hit Lassen Vigen Christensen on the top of the foot as he ambled goalwards. Sadly for Albion the deflection went straight past David Stockdale and into the net .

Before the end Colunga and Solly March, back from injury, wasted free kicks in promising positions and March and Bruno had a brief set – to by the north east corner flag .

But the most significant moment for Albion in the final stages, was Colunga’s sending off . Booked in the 89th minute for taking a free kick too early . Then shown a second yellow in the 91st, for scything down Parker seconds after wasting another opportunity to get the ball on the box .

Colunga will now miss next Saturday’s crucial trip to Derby . A game which Albion will start in the relegation zone .

Former Albion players Jack Dineen and Robert Isaac told Brighton & Hove News how impressed they were by the size of the crowd and the atmosphere the Amex generated , but both were concerned by Albion’s capitulation .

Five things we learnt about Albion’s match with Fulham

1) Darren Bent is a lot taller than he looks on TV . The forward looked imposing and athletic

2) Although named as captain, Lewis Dunk did not get a C by his name on the big screen until halfway through the first half. Scott Parker had his endorsement from kick off.

3) In other big screen woe the operators flashed up 11McLean to replace 29 Forshaw , both players for the last visitors to the Amex with Wigan.

4) Fulham’s shirt sponsor ‘Marathon Bet’ have head their head office at Davigdor Road in Hove, near the old Legal and General offices.

5) Ex players maintain a fondness for the club, both ex Albion and Ireland Under 21 midfielder Jack Dineen and ex Albion and Chelsea defender Robert Isaac , were genuinely disappointed the Seagulls had lost, when interviewed by Brighton and Hove News after the match. 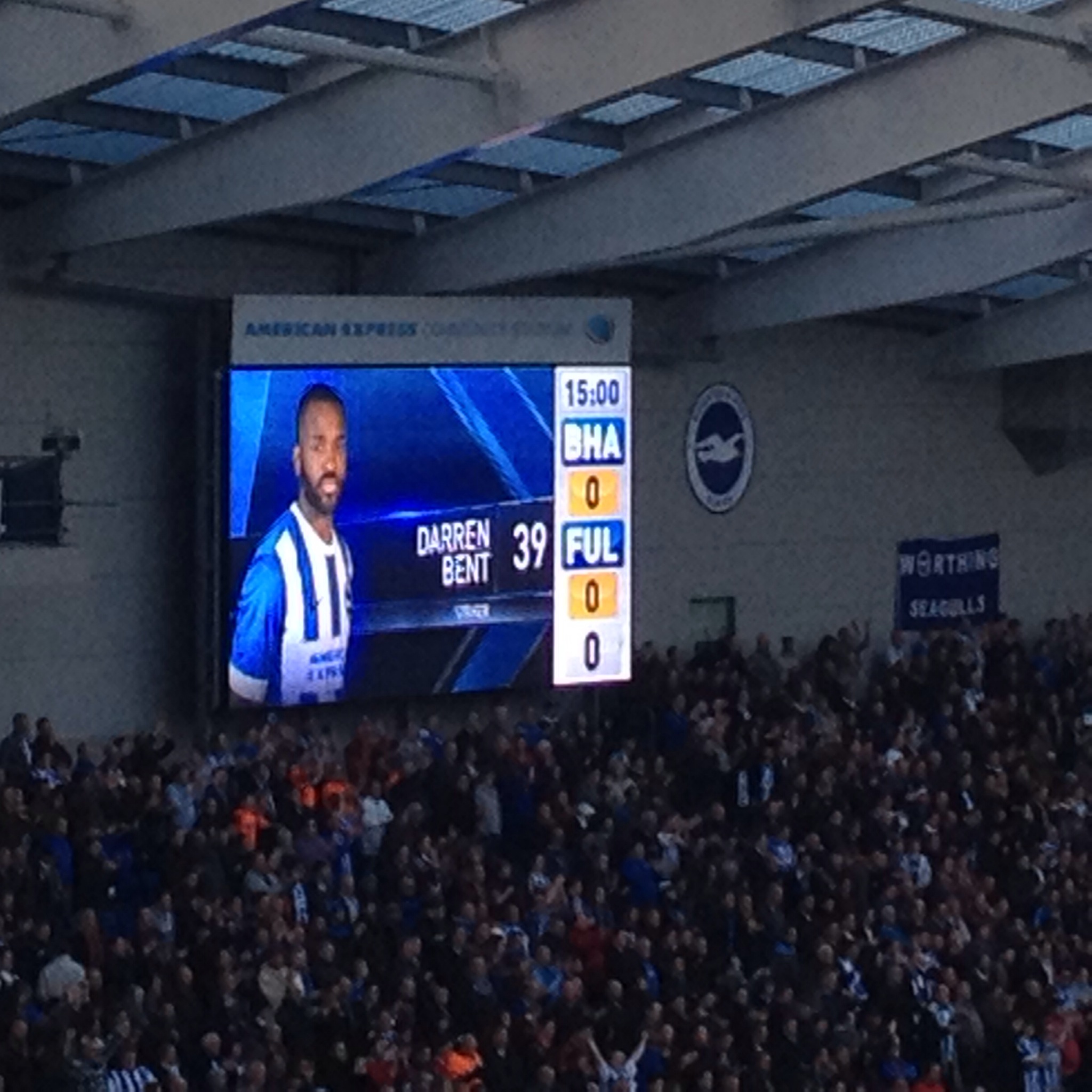