The families of two young Brighton men swept out to sea in the early hours of this morning say the two close friends will be sorely missed. 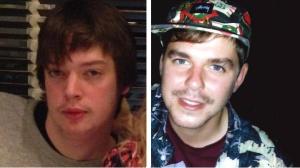 The body of 24-year-old Freddie Reynolds has been identified after being found washed up at Saltdean this afternoon (Saturday 10 January).

Dan Nicholls, 23, of Florence Road, Brighton, is missing presumed dead after the rough waves washed over him as he stood on the shoreline for a dare.

Freddie, of Buckingham Place, Brighton, had dived into the stormy seas to rescue him.

The pair grew up together and were old schoolfriends, then used to share a flat together in the city.

Freddie’s family said: “We are devastated but also extremely proud of Freddie and the bravery he showed in trying to save Dan.”

“Freddie was a very loyal and brilliant friend. He was always looking out for his friends and family and people loved to be around him.

“He was incredibly funny and loved a joke and a banter around the dinner table.

“He had a variety of interests and could often be found skateboarding at The Level or updating his online music under the name of FRNZ.

“He was a brilliant partner to girlfriend Stephanie and was always showering her in cuddles.

“Sister Rosie describes him as a wonderful brother who was always there for her. He has a half brother Matthew.

“He had been a student at Dorothy Stringer School and was now working as a dispensary technician at Ashtons where he was popular among his colleagues.

“His loss will leave a huge void in a lot of people’s lives. His friends and family would like to thank everyone who has been involved in the search for Freddie.”

Dan’s family said: “Dan was very bright. He was quick and witty with lots of friends to whom he was close and loyal.

“He loved music which he both made and produced.

“Dan had a passion for cookery and in July last year prepared a culinary feast as part of his graduation celebrations.

“Dan enjoyed skateboarding at The Level in Brighton with friends and was also a Brighton and Hove Albion season ticket holder with his mother.

“Dan was a sensitive individual who had a real enthusiasm for life. He was a gentleman who always showed concern for others and was a great ‘hugger’.

“Dan was bright and insightful and was a close friend of Freddie.

“Dan leaves his mother Wendy and his sister Martha. The family have received well wishes from a number of people and he was clearly well loved by many.”

Both families request that they are left alone at this sad time.