Police are trying to track down the owners of this pair of red gloves which they believe may have been stolen from a car. 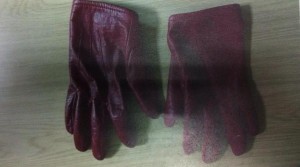 Officers were called to St Leonard’s Road in the early hours of this morning (Tuesday, January 27) to reports of two men acting suspiciously and looking into parked cars.

Two men were subsequently arrested and these gloves found on them.

Acting Sergant Simon Lardner said: “It is suspected these may have come from another residents vehicle. It would really help if we could find the owner.”