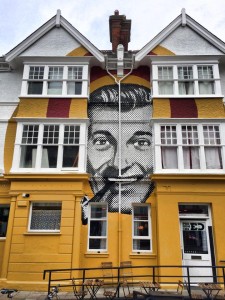 Presuming Ed, which opened in December at the former HSBC bank, is hoping to host one-off gigs over the next year in the existing cafe downstairs.

But next year, it plans to open a dedicated space on its first floor to host bigger gigs.

Manager Charlie Drayton said: “We are going to start off with temporary notices this year, but then looking to licence the whole building for live performances. ”

Gigs in the pipeline include Icelandic lo-fi hip hop artist Hermigervill performing as part of the Diplomats of Sound festival, a stop on a dance trail in May for the Brighton Fringe, and a series of small gigs billed as a Great Escape fringe festival.

Other cultural enterprises include a small art gallery curated by Brighton artist Snub23, who also painted the striking murals on the cafe’s exterior.

Charlie said: “We’re bringing a bit of art and culture to the city. It’s a real community feel as well, making sure everyone’s getting involved and appreciating what we do.

“Since we opened, it’s been really interesting – people are coming in to see the new place and every week you come in there’s something new so it keeps it fresh.”

Also opening in the coming months are a library and garden at the back of the building.

Rooms at the back of cafe, including the old bank vault, are available to be hired free of charge for meetings.

Like its sister cafe, the Marwood Coffee Shop in Ship Street Court, it takes its coffee seriously – but unlike the Marwood, it is happy to serve drinks made with soya and skimmed milk, although syrups are not on the menu.