Pansy photographer to highlight homophobia in Brighton this weekend

An artist who plants and then photographs pansies at places where homophobic attacks have taken place is to visit Brighton this weekend. 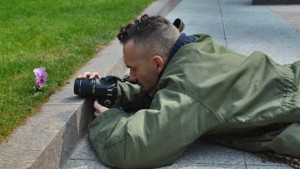 Paul Harfleet started the Pansy Project in Manchester ten years ago after being subjected to varying levels of abuse three times in one day – including having stones hurled at him by yobs.

Since then, he has travelled all over the world, but tomorrow he will visit Brighton for the first time.

Paul said: “It was one of those things I was used to putting up with, but on that day when there were three different incidents, it shocked me into doing something.

“Sometimes I walk around with people as part of an event and they make suggestions.

“This time it will be just me roaming around – then people will come up to me and ask what I’m doing.

“It’s quite bonkers the way I do it, lying on the floor taking a picture of a flower – it’s weird.

“I’m a sort of guerilla gardener.”

If you have any ideas of where Paul should plant his pansies tomorrow, you can suggest them to him on Twitter @ThePansyProject.