A bank that describes itself as revolutionary has opened its first Brighton store and is looking to open a second in the town – and another in Hove.

Metro Bank opened its doors at the top of North Street and at the Clock Tower end of Western Road this morning (Friday 20 February).

The bank is holding two days of celebrations to mark the opening today and tomorrow (Saturday 21 February). 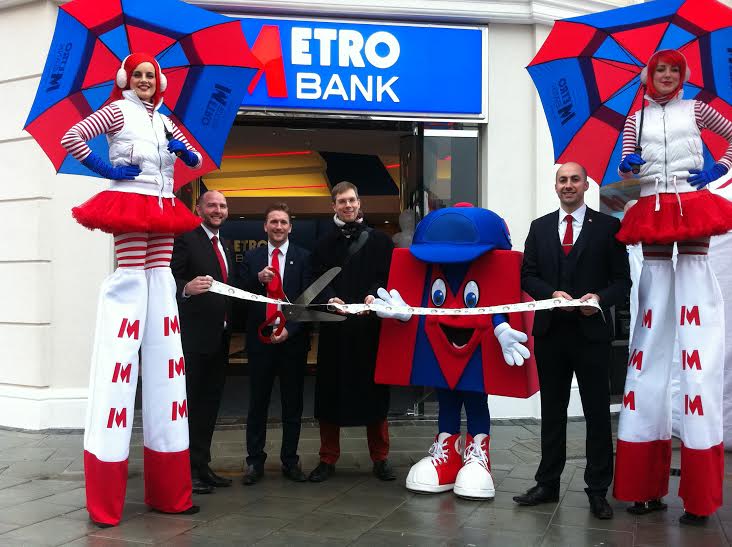 The opening of Metro Bank in Brighton with, from left, Kevin Walker, Brian Quinton, Councillor Jason Kitcat and Nick Simon

The leader of Brighton and Hove City Council Jason Kitcat performed the official opening, cutting a “ribbon” of what looked like £5 notes with a giant pair of scissors.

Councillor Kitcat said: “I am delighted to welcome Metro Bank, a brand new bank, to this high-profile location in Brighton.

“This opening has been highly anticipated by the local community. I very much welcome the new services and jobs Metro Bank will be bringing to Brighton.

“It looks great. I’m pleased to have more choices for people because real choice for UK banking customers is fairly limited.”

He said that he welcomed genuine competition and added: “If the other banks raise their game as a result, everyone’s a winner.

“They’ve responded positively to our work on financial inclusion. We (the council) are working with banks in Brighton and Hove with the impending introduction of universal credit.

“Some banks make it very hard to get a bank account. Some banks have a punitive approach to charges. And some banks are pushy in selling other financial products.”

Councillor Kitcat also praised Metro Bank for incentivising staff according to customer satisfaction rather than through financial sales targets. 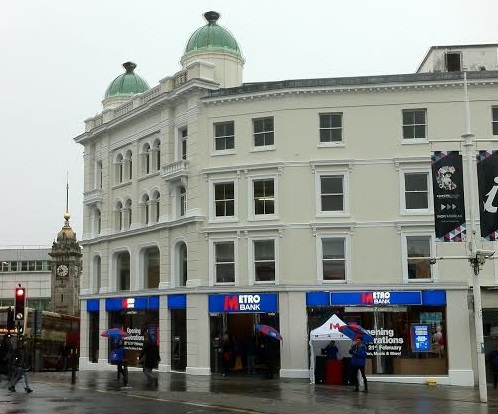 Metro Bank regional director Kevin Walker, a 35-year-old father of two, said: “We are thrilled to be opening our Brighton store and being part of such an exciting and admirable community.

“Our role is to make banking simple and convenient to all our customers and we’re delighted to bring the people of Brighton a bank that is dedicated to providing amazing service and convenience.

“We look forward to welcoming both personal and business customers to the banking revolution.”

Mr Walker said: “Brighton is a fantastic community to be part of – I’ve worked here before. I genuinely love the place. And there are a lot of businesses we can help look after.”

He previously worked for the Bank of Scotland and Clydesdale Bank in Brighton, moving away as a result of his job before joining Metro Bank in 2011.

“We want to open another store in Brighton. We’re looking at Hove too. Metro Bank are looking to be in all the key communities in the south east.

The 26 staff at the Brighton branch were, he said, a mix of people recruited from the area and existing Metro Bank staff joining from other branches.

Great to be able to open MetroBank #Brighton this morning. Strong financial inclusion policies & no sales targets for staff. Welcome!

Mr Walker said: “We want to bank the community. Vernon (Metro Bank chairman Vernon Hill) says there are only two types of people – those who bank with us and those who will.

“We want to be different and better. People buy from people. We want the right people in our stores giving great customer service.

“We want to operate the old-fashioned banking model with the new technology doing the heavy lifting.

“We are passionate and we want to create fans not customers.

“We measure our staff on customer service. When I’m recruiting, I always ask myself: ‘Would I bank with this person?’

“We’ve hired people who want to serve customers – 26 or 27 to start with plus the commercial team and support staff.

“It’s great to see our community lending create jobs too.”

Dogs and children are welcome, with toilets and a baby-changing space as well as the more traditional vault of safety deposit boxes.