Residents of Viaduct Road have backed a controversial trial of chicanes using plantpots in their road. 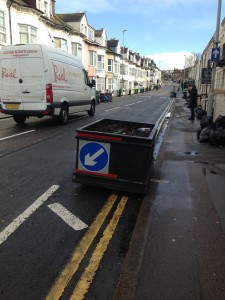 The trial, aimed at slashing excessive speeds, has succeeded in slowing traffic down from an average of 43mph to about 23mph, the London Road Area Local Action Team (LAT) heard last night.

But so far the only accident of note happened when a drunk pedestrian fighting on the pavement stepped out into the road into oncoming traffic, the meeting was told.

While most expressed hopes a permanent solution would be more attractive and make better use of space claimed back from traffic lanes, they voted unanimously to carry on the trial.

Long-time Viaduct Road resident Penny King said: “As a lump of metal there, it’s not attractive, but the idea is good.  If you were to have nice trees in there that would be lovely.

“Like any trial, you have to give it a chance.”

Simon Bannister, from the council’s community safety projects team, said: “There are two trials going on – one is by the road safety officers looking at speed, and the other is the Viaduct Road residents trying to improve their street.

“If it’s decided that this space in the road is spare, what should we do with it?

“We need to look at whether it would be good to have a cycle lane there, or communal bins, or visitor parking rather than the plant pots.

“It’s about how to improve the liveability of Viaduct Road.”

Brighton Pavilion parliamentary candidate Clarence Mitchell said it was good to see speeds coming down, but questioned how the trial had been implemented.

He said: “Our concern when they first appeared was how they were done – it appeared to be no council involvement, no discussion at committee, they just appeared.

“On top of that we believe that putting a large immobile object is dangerous, particularly as you come round the corner from Preston Circus. I’ve heard from several motorists whose wing mirrors have been clipped.

“We also have concerns about cyclists having to move out into traffic to get round them.”

He said his preferred solution would be for overt signage and a speed camera.

“This is just a way of seeing how speeds could be brought down. The traffic officer took the opportunity presented by the gasworks at Preston Circus.”