Mother of two Nikki Braterman, 45, from Brighton, has died ten days after having had a bone marrow transplant.

Her widower Geoff posted statement yesterday (Sunday 22 March) on the Perfect Ten Match website that they set up to try to find a suitable donor.

It said: “It is with unbearable sadness that we have to say that Nikki died on 21 March 2015. 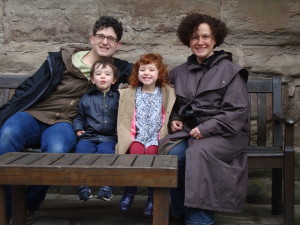 Nikki and Geoff Braterman and their two children

“She had received her transplant only nine days earlier but regrettably she suffered an infection and a range of other complications from which she never recovered.

“We will keep Perfect Ten Match going as the need to recruit donors continues but will be active in our campaign only when ready.”

Mrs Braterman had been suffering from acute myeloid leukaemia, a blood cancer, which was diagnosed in December 2013.

She updated her website after her transplant to say: “I underwent a bone marrow stem cell transplant in March 2015.

“I launched this website in 2014 in order to find a suitable donor to give me hope that I can recover from this disease.

“I have now had my transplant but I want to use the interest my story has generated to encourage others to register as a bone marrow stem cell donor in order to help others in the future.

“I was diagnosed with acute myeloid leukaemia. My disease has a rare cytogenetic abnormality called the ten-eleven translocation which put me at a high risk of relapse following chemotherapy.

“This relapse has now occurred in September 2014 and the search is on.

“My best chance of a cure was to have a bone marrow transplant.

“My search for a bone marrow match has been complicated by me having extremely aggressive antibodies.

“A donor was found in France but unfortunately they were only a 9/10 match.

“The best chance was a Perfect Ten Match but because of how my disease progressed, the fact that time was running out and doctors had techniques to control my antibodies, my transplant went ahead with the 9/10 donor in March 2015.

“I am no longer looking for a donor myself but we need people to join the registers all the time and I hope you will read more about my story and learn about how you can help others.”

She leaves a son and a daughter and her widower Geoff.