Inspirational playwright among latest city greats to be given bus honour

Playwright Adrian Bunting is one of 24 names chosen to grace the front of Brighton and Hove Buses’ new fleet. 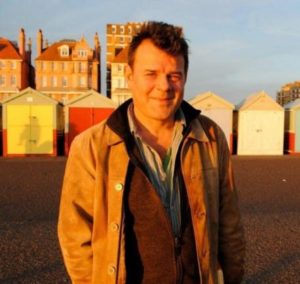 After Mr Bunting died aged just 47 of pancreatic cancer in 2013 he left a small financial legacy – but a huge vision, for an open air amphitheatre in the city.

His friends and supporters rallied round, and after finding a site, raising money and winning over planners, the Brighton Open Air Theatre is due to open in just a few weeks.

Close friend Dan Wilson said: “There are few greater Brightonian accolades than having your name on a bus and Adrian would have been delighted.

“It’s another nod to the contribution he made to the city’s cultural life for many years and timely too because his other legacy, the Brighton Open Air Theatre will be opening in May.

“Wouldn’t it be marvellous to take the Adrian Bunting bus to the BOAT at Dyke Road Park to catch a play?”

Their names will be put on the front of 24 new Coastway buses on the number 12 service which runs from Brighton along the coast and through the South Downs to Eastbourne.

Click here to see what names are already carried by Brighton and Hove buses.

To find out more about those honoured, read on.

Frank Bridge
Brighton-born Frank Bridge was an early twentieth century composer, violist and conductor. His best-known works are his chamber music, but he is perhaps best known as Benjamin Britten’s tutor.

Dora Bryan
Actress Dora Bryan died last year at the grand age of 91 at a nursing home in Hove. She was a star of stage, radio and both the big and small screen, appearing in Carry On films, Hancock’s Half Hour, Absolutely Fabulous and Last of the Summer Wine.

Henry Tracey Coxwell
An English aeronaut, Coxwell was a leading figure in the golden age of hot air balloons. He had a balloon factory in Seaford, where he later retired.

Jonathan Darby
Hundreds of years before the Beachy Head lighthouse was built Parson Darby hollowed out a cave in the cliffs, with a sloping tunnel and steps leading to it from the beach. On stormy nights he hung a lamp in the cave, then waited in case sailors needed help.

Gracie Fields
Best known as a music hall star, Gracie Fields also set up the Gracie Fields Children’s Home and Orphanage near her home in Peacehaven for children of those in the theatre profession who could not look after them.

Ian Gow
The Conservative MP for Eastbourne was assassinated by the IRA who planted a bomb under his car at his home in Hankham in 1990.

Rudyard Kipling
One of the most succesful English poets and novelists of the Victorian era, Kipling is almost certainly Rottingdean’s most famous resident.

The Lawrence Sisters
Penelope, Dorothy and Millicent Lawrence together founded Roedean School in 1885, with just ten girls in a house in Lewes Crescent (it did not get its name until its move along the coast). Their aim was to prepare girls for entrance to the newly opened women’s colleges at Cambridge, Girton and Newnham.

Edith Nesbit
Better known as E Nesbit, this well-loved author of children’s classics such as Five Children and It and The Railway Children spent part of her childhood in Brighton and later retired to Friston

Don Partridge
One man band and “King of the Buskers”, Don Partridge enjoyed unexpected success in the 1960s with his hits Rosie and Blue Eyes.

Eric Ravilious
The Sussex artists Eric Ravilious is best known for his watercolours of the South Downs. He grew up in Eastbourne and studied at the town’s school of art and later the Royal College of Art.

Ralph Reader
Perhaps inspired by shows he saw as a teenager at the Brighton Hippodrome, Ralph Reader is known for staging the scout movement’s first Gang Show.

Bill Axcell
Most Brightonians of a certain age will know Mr Axcell better as the Glass Animal Man who charmed children at his Queen’s Road studio with his fragile creations.

Zoe Brigden
Aquatic entertainer Zoe Brigden would please crowds on the seafront by jumping off a diving board on the West Pier between 1915 and 1924, famous for her “wooden soldier” pose with her arms at her side as she made her descent.

Brian Cobby
In 1985, Brian Cobby became the first male voice of the British speaking clock, a role he won in a contest while working at the telephone exchange in Withdean.

George Holkham
A member of The Boys’ Brigade as a boy and an officer with the 16th Brighton Company at Stanford Avenue Methodist Church in Brighton. Battalion Secretary for the Brighton and Hove District Battalion and Field Officer for the Brigade which covered South East England. He was involved with a Royal Review at Windsor Castle and shortly afterwards was awarded the MBE for services to the BB.

Richard Jones
The Saltdean Lido is on the brink of an astonishing restoration after the community wrestled back control of the art deco swimming pool which had fallen into neglect. The striking Grade II listed building was designed by Richard Jones in 1937.

John Nathan-Turner
After joining the BBC as a floor assistant in the 1960s, Mr Nathan-Turner was the ninth producer of the long-running BBC science fiction series Doctor Who. He had a home in Saltdean, where he died in 2002.

Alfred Richardson
Mr Richardson was an English schoolmaster and cricketer who played first-class cricket between 1895 and 1913/1.

Eric Slater
Eric Slater was a colour woodcut artist who had an international reputation in the 1920s and 1930s. Many of Slater’s prints are inspired by the South Downs and the coastline near his Seaford home.