Mr Osborne even worked the dough at the Church Road Pizza Express as he paid tribute to the company’s promise to take on an apprentice in every branch.

The apprenticeship plan is expected to create 2,500 jobs over five years. 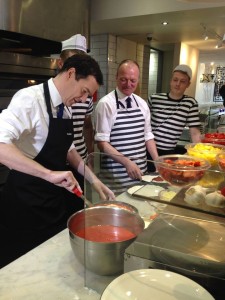 The Chancellor’s visit reinforced the opinion expressed in the Guardian yesterday (Monday 30 March) when the newspaper described Hove as the bellwether seat.

Whichever party wins Hove, the Guardian said, can expect to win the most seats in the House of Commons.

The Conservative candidate for Hove, Graham Cox, was obviously delighted at the support shown by his fellow Tory.

He said: “I invited Chancellor George Osborne to Pizza Express in Church Road for the announcement that the restaurant chain is creating 2,500 new jobs across the UK.

“We even got the chance to make our very own American Hot pizzas. I think the Chancellor’s may have been better than mine.”

Mr Osborne, who also visited the constituency last August, told staff that he had been eating at Pizza Express since he was a child.

A signal failure at Wivelsfield, and the cancellations and delays that followed, prompted a change of plan by the Chancellor who ended up coming by car instead of on the train.