Guardian journalist Owen Jones is to speak at a public meeting alongside Nancy Platts, the Labour candidate for Brighton Kemptown, this week.

They will be joined by Sussex University student Solomon Curtis, 18, who is standing for Labour in Wealden. If he elected, he would become Britain’s youngest ever MP.

Mr Jones is due to talk about young people and the ballot box at Dorset Gardens Methodist Church on Wednesday (8 April) from 7pm to 8.30pm. 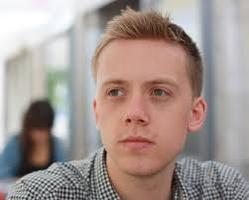 The Guardian columnist has written two books – Chavs: The Demonisation of the Working Class and The Establishment – And How They Get Away With It.

“I want to reach out to as many groups as possible in this campaign, to hear what they have to say and if elected on 7 May be able to represent their views in Parliament.”

Also on the panel will be student and political campaigner Sian Carey, who chairs Brighton and Hove Young Labour, although she is not yet old enough to vote.

Admission is free for the event which is based around a panel discussion with the audience.

For tickets, visit Eventbrite or www.nancyplatts.org.uk/events.