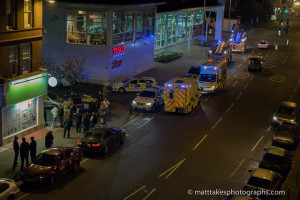 A man was tasered by police last night after threatening to harm himself in Hove.

A 22-year-old man was arrested on suspicion of affray after making threats to harm himself in Miles Walk, off Church Road.

Police were called at 10.20pm, and fire and ambulance crews also attended along with the police firearms unit.

Police said the man then made  further threats to officers and a Taser stun gun was fired at him.

He was seen by paramedics at the scene and taken to the Royal Sussex County Hospital to be treated for a small cut to his head.

He has now been discharged, and is currently in custody awaiting questioning.

Inspector Dave Robinson said: “The matter is currently under investigation and I would ask that if any member of the public witnessed the incident and can offer further information then call police on 101 or email 101@sussex.pnn.police.uk quoting serial 1612 of the 10/4.”

One local resident who passed by after the incident said: “I was just coming home from the football and saw all the emergency services.

“Someone was on the floor and being treated by paramedics outside the shop.”

A spokeswoman for South East Coast Ambulance Service said: “We received a call at 10.53pm and attended, along with fire and police. A single patient, an adult male, was taken to Royal Sussex County Hospital.”

The fire service said they were called to an alarm going off, but their help was not required.